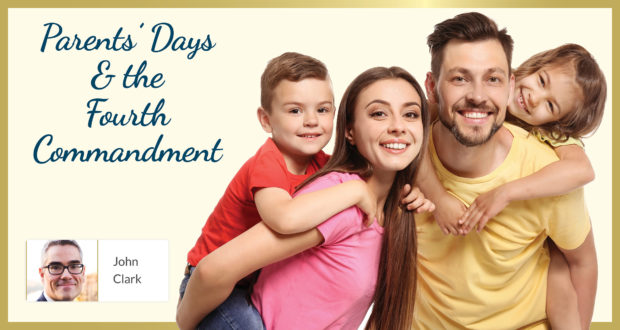 John Clark comes to realize that the greatest version of honoring his father and following the Fourth Commandment—is to be a good father.

As every Catechism student can tell you, the Fourth Commandment is “Honor Thy Father and Thy Mother.” It’s one of the easiest commandments to memorize; what proves difficult is explaining the commandment’s central importance to the Christian life.

In the second part of the Decalogue, it occupies the very first position. And just as there are cardinal virtues, this seems to be a cardinal commandment—upon which the rest of the commandments hinge.

Saint Thomas Aquinas illustrates the uniqueness of this commandment. Whereas the second part of the Decalogue is a series of shalt nots, this commandment contains a positive precept.

Aquinas observes, “The Decalogue does not prescribe deeds of kindness or service to be done to anyone except to one’s parents.”

One Sunday in May and another in June, we can pause to reflect on this commandment—as we help our fathers and mothers enjoy their appointed days. This year will be a particularly poignant Father’s Day for me, and I’ll explain why in a moment.

To begin, let me say that while there are those parents who make the Fourth Commandment very difficult to follow, I’ve been blessed with parents who’ve made it pretty easy.

In the case of my mom, how can you fail to honor someone who has made a profoundly positive difference in the lives of tens of thousands of Catholic families over a span of two generations?

And that’s after raising seven sons on a shoestring.

What about my Dad?

As you readers know, this is the first year I’ll be separated from my Dad on Father’s Day. But perhaps “separated” isn’t the right word—any more than the word applies regarding the transcendental relationship between the Church Militant and the Church Triumphant. Rather than view it as a separation, I see this as the first year I will have a transcendental union with my Dad on Father’s Day.

That doesn’t mean I won’t miss him; after all, Jesus wept over the death of a friend, and so should we all. But I truly believe that my Dad is in Heaven right now. For my father, hell had no victory; death had no sting.

I miss my Dad, but this thought provides sufficient consolation. As does this: Last year, my father prayed for me on Earth; this year, he can pray for me in the very presence of God. Hell scores no victory there, either.

This Father’s Day reminds me that the Fourth Commandment does not cease upon death. Mercifully, it continues into eternity.

Thomas Aquinas wrote, “Now a son’s debt to his father is so evident that one cannot get away from it by denying it: since the father is the principle of generation and being, and also of upbringing and teaching.” That observation by the Angelic Doctor will always be true. Even in Heaven, I’ll still call him “Dad.”

He’s earned the “honor” mentioned in the Fourth Commandment.

He’s also earned my emulation. That presents a challenge for me, but a thoughtful and joyful one.

Living in Columbus, Ohio, my Dad was a huge fan of the Ohio State Buckeyes and their coach, Woody Hayes. A year before Coach Hayes passed away, he was honored to give a commencement speech to the Buckeye graduates.

His voice cracking with emotion, Hayes said, “So seldom can we payback. Because those whom you owe—your parents…will be gone. Emerson had something to say about that. He said you can pay back only seldom. But you can always pay forward, and you must pay line for line, deed for deed, and cent for cent. He said beware of too much good accumulating in your palm, or it will fast corrupt. That was Emerson’s attitude, and no one put it better than he did.”

After the loss of my father this year, I realize that the greatest version of honoring my father—the most profound actualization of the Fourth Commandment—is to be a good father.