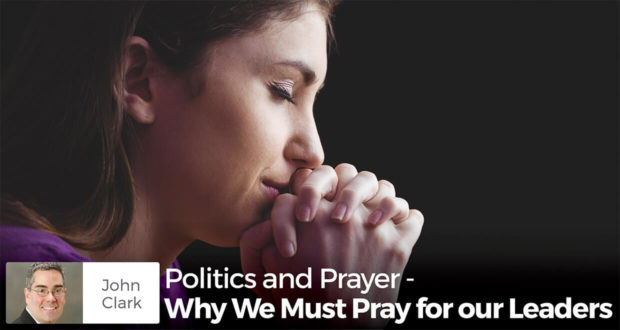 Politics and Prayer – Why We Must Pray for our Leaders

Prayers for our leaders? In Politics and Prayer, John Clark says that part of being good Catholic citizens is to pray for our leaders, whoever they may be.

In the dawning days of the Catholic Church, Tertullian, the great father of the Church, argued that one of the reasons that Christians make good citizens is that Christians pray for the rulers of the nation, writing:

“We pray, too, for the emperors, for their ministers and for all in authority…”

And with the election season upon us, it’s a message of which we must remind ourselves: we Catholics must make ourselves good citizens by praying for our leaders, whoever they may be.

I’m guessing that some of you reading this have never actually prayed for your political leaders.

Let’s face it, at the end the day, is your mayor or senator really in your family’s night prayers? For that matter, many Catholics not only fail to pray for their leaders, but couldn’t name them on a multiple choice exam. That’s a sad commentary—sad not for reasons of civics, but for reasons of grace.

We have a duty to pray for our leaders that emanates from the fourth commandment; the Catechism makes that much clear. We pray for our leaders not just for the sake of the governed—although we are certainly justified in doing that—but for the souls of the leaders. History has illustrated either or both of the following: one, that politics is the favorite profession of evil men; two, that political power, once attained, often has a powerfully corrupting influence.

Either way, political temptations prove very strong and there is little doubt that these temptations originate from Lucifer himself. Jesus tells us that the devil was a liar from the beginning; the devil was also a political opportunist from the beginning. In the Mystical City of God, Venerable Mary of Agreda describes the scene at which Lucifer refuses obedience to God:

“To this command all the obedient and holy angels, submitted themselves and they gave their full assent and acknowledgment with a humble and loving subjection of the will. But Lucifer, full of envy and pride, resisted and induced his followers to resist likewise, as they in reality did, preferring to follow him and disobey the divine command. This wicked prince persuaded them, that he would be their chief and that he would set up a government independent and separate from Christ.”

At the very moment that Lucifer was falling, he announced the formation of a new totalitarian government—one that would separate not only church and state, but God and state. Rejecting the wedding feast of Heaven, Lucifer made a persuasive argument to form a new party, asking only one requirement for constituency: an eternal rejection of God.

It must have been a great speech, because perhaps one-third of the angels fell “like lightning” to Hell. And Lucifer would not be content to merely rule from Hell; he would seek to establish shadow governments, pulling the strings of puppet governments in various parts of the Earth.

Has the devil been successful at establishing his earthly kingdom? How else can one explain the brutal, global, two-hundred-decade attack on Christianity? From the kangaroo Roman courts of Nero to the bloodthirsty French guillotines of Robespierre to the Soviet-forced starvation of Ukraine by Stalin, there is little need to dust history for fingerprints—the forensic imprint of Lucifer endlessly abounds at every anti-Christian crime scene. Wanton wickedness witnesses the fact that some leaders have not only deafened their inner voice, but have undergone an amputation of conscience of which their subjects are left to feel the phantom pains of that missing organ.

The devil does not cease these political temptations. When Our Lord walked the earth, the devil (not knowing the identity of Jesus at the time) tempted Jesus with the notion that if He would worship the devil, Jesus could gain the kingdoms of the earth. Is there any wonder as to whether this is Lucifer’s standard political pitch to this day?

Lucifer does not consider his earthly work complete. Lucifer does not believe in term limits; he still seeks to influence governments and leaders. And that is why we must pray for our leaders and for all the political powers of earth.

But it’s worth remembering that we may be called to account as well: Did we pray for our leaders? Did we fast for them? Did we prove to be good citizens of our nation? Did we work hard to further the reign of Christ on Earth—to further the noble aspirations of Christendom? Or did we look the other way and refuse to do anything?

May we all answers these questions well.