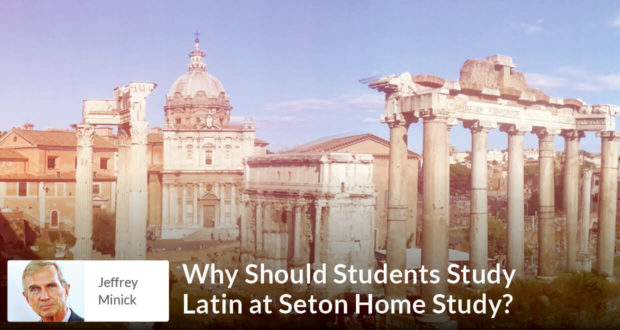 Why Should Students Study Latin at Seton Home Study?

Why does Seton Home Study School encourage students to take Latin? Counselor Jeff Minick speaks to that and the advantages Seton offers its Latin students.

Why study Latin? What’s the point? Outside of a Latin Mass or certain functions at the Vatican, no one speaks Latin anymore. It’s unlikely you’ll ever shamble about the neighborhood conversing with your friends in the language once spoken by Caesar and Calpurnia.

So, why do Seton and other schools encourage students to take Latin? What are the benefits? And for young people interested in learning lingua Latina, what advantages does the Seton Home Study School offer its Latin students?

Some students learn Latin hoping to improve their SAT English scores, and studies have shown Latin students excel on that part of the test. With far less effort, however, students could memorize lists of words, definitions, roots, and usage to prepare for such tests.

Others come to Latin seeking a gateway into the specialized language of law and medicine.

Again, there is evidence that Latin helps them succeed in these endeavors, and many scientific and legal terms spring from Latin roots, but students who have never cracked a Latin text do as well in these fields as those who study Cicero and Virgil.

Study Latin and You Master English.

First on this list of reasons is inflection. English sentences depend on word order to convey their meaning. If we say “Mary sees the sailor,” we cannot change the word order without changing the meaning of the sentence.

However, Latin is an inflected language, meaning word endings determine the function of words in a sentence. In Latin, we might typically write “Mary sees the sailor” as “Maria nautam videt.”

Yet, we also could tumble the Latin words about however we liked—“Maria videt nautam,” “Nautam Maria videt,” “Videt Maria nautam,” and so on— because of the endings of the words, even the beginning Latin student would read all of these sentences as “Mary sees the sailor.”

Now you may ask: So what’s the big deal? The big deal is that inflection, changing the form of a word to express its function, gives us an amazing tool for understanding grammar and syntax.

Studying any foreign tongue deepens our knowledge of the English language, but inflection forces us to explore grammar and syntax in more intricate ways. Different word endings determine whether a noun is a direct or indirect object, whether a verb is in the present or future tense.

In addition, Latin provides us with a gymnasium of the mind. It exercises our brain. Like algebra and calculus, like physics and chemistry, the study of Latin trains us to think more clearly, more logically. By coming at language from such a different direction as inflection, students find themselves intimately engaged in these mental gymnastics.

Latin also serves as a superb introduction to the Romance languages. French, Spanish, and Italian are all related to Latin, and knowledge of the language familiar to Pliny and Aquinas makes learning these other languages much easier. Former students of mine, who took just two years of Latin, excelled in high school or college French, Spanish, or Italian.

Latin opens windows on our English vocabulary. Though English is a Germanic language, more than half of all English words are derived from Latin. The longer the word, the greater this percentage. A vast majority of four and five syllable words are rooted in Latin soil. In that sense, Latin is not a “dead language.” It is very much alive.

Nor should the historical significance of Latin be overlooked. Not only will students learn the language spoken and written by the ancient Romans, but they will also take part in an educational experience once shared by men and women from Marcus Aurelius to Thomas Jefferson, from Virgil to Dante and Margaret Roper, Saint Thomas More’s daughter.

For twelve hundred years after the fall of the Western Roman Empire, scholars, ecclesiastics, and statesmen read and spoke this ancient language.

Latin also continues to be the official language of the Roman Catholic Church. To study Latin makes us a part of this Great Tradition.

Finally, Latin carries a certain cachet. Suppose your grandmother, perhaps suspicious of home schooling, asks what foreign language you are studying. If you reply, “Spanish,” she will likely say, “Well, that’s very practical these days.” Should you answer “French,” she may comment, “French is a beautiful language.”

If, however, you respond, “Latin,” your grandmother will likely offer one of two comments. She may ask you why anyone would study a dead language, in which case you should cite the above arguments. But she may be as likely to say: “Latin? Latin? You must be smart.”

And so you are, again, for the reasons cited above.

First, Seton uses the Father Henle Latin series. Some may criticize the Henle textbooks as antiques—they were written during World War II and contain references to that conflict—but the books remain in print for a good reason: they serve their students well, particularly homeschoolers.

Many other textbooks—and I have taught several—are teacher-dependent texts. The first chapter of these books typically offers a lesson in the first declension, the second in the present tense of first conjugation verbs, the third in adjectives. Such jumping around from nouns to verbs to adjectives can easily confuse students.

Unlike these texts, the Henle books follow a logical pattern. These textbooks first teach the declensions of nouns, pronouns, and adjectives, then move into the verb conjugations. This progression allows students to grasp the order of Latin forms and syntax.

Besides its wise choice of a textbook, Seton also offers its students numerous helps. The lesson plans contain many excellent suggestions for study. Audio and video aids for these lessons are also available. The video series walks the student through the Henle Latin I book chapter by chapter. Finally, students seeking additional assistance are encouraged to call or email our staff with their questions.

We, at Seton, also encourage you to seize other opportunities in your Latin studies. We urge students to take the National Latin Examination, offered annually in March by an organization independent of Seton.

If you enjoy Latin and welcome academic challenges, we encourage you to continue your studies past Latin III to consider taking the Advanced Placement Latin Test for bulking up your academic record, for gaining college credit, and for the grand honor of translating Virgil and Caesar.

“Non scholae sed vitae discimus.” We learn not for school but for life. The lessons you gain from your study of Latin—the language skills, the value of perseverance and hard work, the knowledge you can tackle a new subject and make it your own—will serve you for a lifetime.

Jeff Minick is the Latin Counselor at Seton Home Study School. He has spent the last twenty-five years teaching Henle Latin to his children and hundreds of home-educated students, guiding many through their preparation for the Advanced Placement Latin examination. Jeff is the father of four children, all of whom were homeschooled, and grandfather to twenty-one grandchildren, three of whom he homeschools.
church doctor education henley jeff jeff-minick latin latin students lawyer minick science seton textbook vocabulary 2017-06-12
Contributing Writers