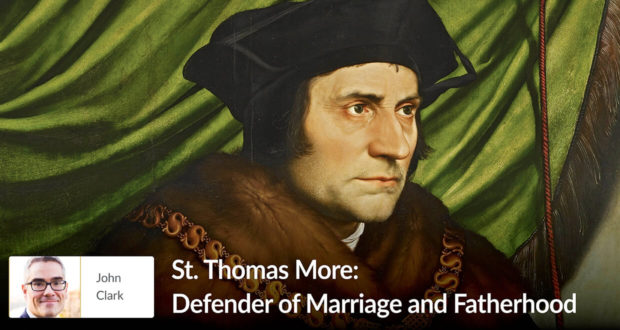 When homeschool fathers need inspiration, ask for St. Thomas More’s help, to be like him, “God’s good servant”, offering love and sacrifice for our family.

Born into some of the most tumultuous times in the entire history of the Catholic Church, the brilliant Saint Thomas More has been hailed with many accolades: patriot, genius, statesman, martyr, saint. But to a group of children in the 16th Century, he was simply “father.”

The legacy of Saint Thomas More is so powerful that even today, centuries later, he inspires those who may not agree with his political and religious positions; for good reasons. They respect the fortitude that he exhibited all the way to his Earthly end, but if they know only his public life, they are missing much of the character of this great man.

In 1505, Thomas More married Jane Colt, who tragically died in childbirth only six years after their wedding. But their marriage produced one son, John, and three daughters, Margaret, Elizabeth, and Cicely. Thomas also became a father to his second wife’s child and a foster father to others. These children brought great fulfillment into this life, and Thomas referred to his children as “my joys.” His biographers paint a picture of Thomas as a playful, affectionate, and happy father.

Thomas More also proved to be a great homeschool Dad, and the evidence of that is seen throughout his writings. When away on business in the year 1521, Thomas sent a letter to his children that began, “Thomas More, to his whole school, greeting.” Thomas realized the importance of learning and of making learning a happy experience.

The British custom at the time was to academically teach only the boys, as education was deemed unimportant and even detrimental for girls. Yet Thomas saw the nonsense of that, so he taught his daughters on his own. He taught them subjects such as science and literature, and he seemed to have a unique love and ability for teaching Latin. Thomas taught his daughters Latin so well that they seemed equally at ease with Latin or English, translating it back and forth to each other as part of their homeschool regimen.

When meeting with a bishop one day, Thomas dropped a letter from his pocket that his daughter had written to him in Latin. The bishop picked it up and glanced at it, and saw that it had been written in perfect Latin. The bishop was astounded that it was written by a woman.

Living in a Virtuous Time

But it was virtue and the central importance of the Catholic faith that Thomas most desired to convey to his children. One of his biographers recounts that Thomas told his young children that they were fortunate to live at a time when people were happy and holy and virtuous—men and women whose lives were wonderful examples of Christianity.

But he also warned them that there may be a time coming when virtue was punished and sin was rewarded. And he urged them, when that time arrived, to hold fast to almighty God, Who loves them.
As he reminded them, the only lasting comfort and consolation comes from God alone.

Thomas More let King Henry know that this was no small matter; Thomas would not bear witness to the king’s lie. For his refusal to go along with the king’s new “marriage,” Thomas More was put in prison and eventually beheaded after he proved unwavering in his resolve.

Defender of Marriage and Fatherhood

We can look back at his life and death, and observe that Thomas More was one of the most ardent champions of the Sacrament of Matrimony in ecclesiastical history. And we would be correct in doing so. But it’s also worth noting that, in defending marriage, Thomas was defending fatherhood. Because if matrimony can be put asunder, so can fatherhood.

If sacramental matrimony can be terminated with the stroke of a pen or the pronouncement of a tyrant, the family is in mortal danger, and children are left in a position in which the real seems pretend and the pretend seems real. In the end, the Sacrament of Matrimony—and the mothers and fathers and children who are nurtured by this glorious sacrament instituted by Jesus—must be defended by all means possible. Thomas More understood this, and in the end, it was the hill he died on.

Saint Thomas More’s life was one of learning, love, and sacrifice. So when you homeschool fathers need some inspiration to keep going, think of Saint Thomas More’s indelible love and unshakable perseverance. Ask him to pray for your marriage: that it be strong and fulfilling and full of joy—that you may be “God’s good servant” by living a beautiful life of love and sacrifice for your family.