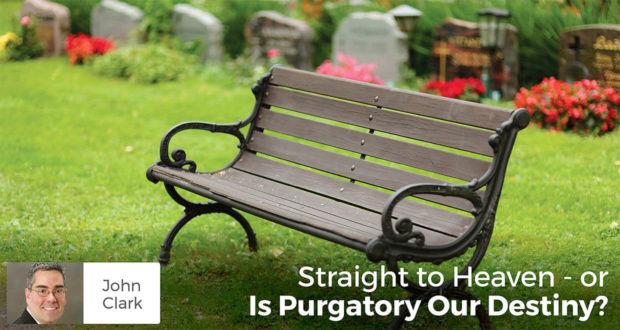 Straight to Heaven or – Is Purgatory Our Destiny?

Even though many Catholics hope for Purgatory after death, John Clark points out that the saints remind us that God desires us to go straight to Heaven.

But in thinking about these souls, many of us are convinced—many of us even desperately hope—that Purgatory is our penultimate destiny on the way to Heaven.

We often see Purgatory as an inevitable and, frankly, welcome pit stop on the road to salvation; as a place for those who, though they lived pretty good lives and died in the state of grace, nevertheless failed to stick the spiritual landing. With Heaven in our certain grasp, even a prolonged stint in Purgatory seems to be almost too much to hope for.

But there was a Carmelite sister who disagreed with this viewpoint—who saw Purgatory not as something to be hoped for, but to be hoped against; not something inevitable, but something altogether avoidable.

“…(H)ow greatly you injure the good God when you believe you are going to purgatory. For one who loves there can be no purgatory.”

When confronted with the idea of the inevitability of Purgatory, she counseled:

“You are not sufficiently trusting, you fear God too much. I assure you that this grieves Him. Do not be afraid of going to purgatory because of its pain, but rather long not to go there because this pleases God who imposes this expiation so regretfully. From the moment that you try to please Him in all things, if you have the unshakable confidence that He will purify you at every instant in His love and will leave in you no trace of sin, be very sure that you will not go to purgatory.”

These words were not written by a modernist nor by one overcome with spiritual laxity. Their author was a Doctor of the Church: Saint Therese of Lisieux.

But how can Therese be right about this? Even allowing for the mercy of God, how are the demands of justice met if not in Purgatory? At first blush, Therese’s viewpoint of Purgatory seems to contradict anther religious sister, whose very name is almost synonymous with divine mercy: Saint Faustina.

In her Diary, Saint Faustina recounted a mystical experience in which she visited Purgatory with her guardian angel. Faustina wrote:

In a moment I was in a misty place full of fire in which there was a great crowd of suffering souls….I asked these souls what their greatest suffering was. They answered me in one voice that their greatest torment was longing for God….I wanted to talk with them some more, but my Guardian Angel beckoned me to leave. We went out of that prison of suffering. [I heard an interior voice] which said, “My mercy does not want this, but justice demands it.”

It might seem that the writings of Saint Therese and Saint Faustina are contradictory, but they are not. Saint Therese posits that the soul who truly loves God will not suffer Purgatory. Saint Faustina’s account, in actuality, shows the same thing. She asked the poor souls what their greatest suffering was, to which they responded: “Longing for God.”

Either way, it is love that delivers souls from Purgatory. As St. Therese reasoned: “How could He cleanse in the flames of Purgatory souls consumed with the fire of Divine Love?” Indeed. As Scripture tells us, “Love covers a multitude of sins.”

St. Therese and St. Faustina also agree on this: in His Mercy, God does not will for you to go to Purgatory.

You and I are sinners—that much we know. Thus, in some sense, justice dictates a “guilty” verdict for you and me. But the very fact that men exist in Heaven—that sinners became saints—is evidence that a verdict of “guilty” does not necessarily dictate the sentence of eternal punishment. Nor does that verdict necessarily require punishment in Purgatory.

All the more reason to offer up our sufferings on earth.

So our mission is quite simple.

We must deepen our love for God today: through prayer, our daily duties, an increase of faith and trust in God, good works, small sacrifices, love for each other, care for the needs of the poor, reception of the sacraments, and Eucharistic adoration. Let’s ask God to deepen our love of Him, so that we will never experience the terrible suffering of being apart from Him for even a single moment in Purgatory.

As Saint Therese reminds us, Purgatory is not our destiny.

Heaven is our destiny.