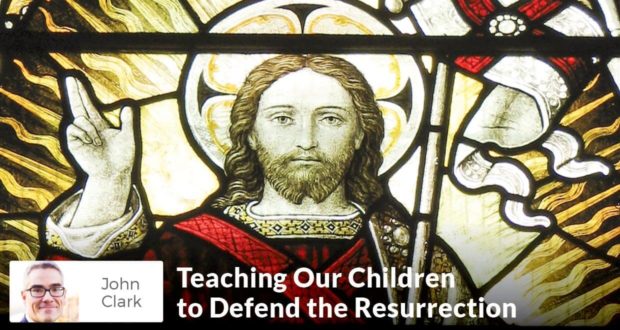 Teaching Our Children to Defend the Resurrection

John Clark wants us to teach our children to argue, so that they will be well-prepared when the world, with its doubts and questions, argues with them.

I can’t believe I’m saying this as a parent who is raising his sixth teenager, but we need to teach our children to argue.

In lots of different ways, we Catholic parents teach our children the Faith every day, and much of our time is spent discussing official Church teaching. Yet, there will come a day for our children when that Faith is questioned.

That is where apologetics comes in handy. Apologetics does not typically seek to “prove” things; instead, it seeks to illustrate why something is reasonable to believe. Over the years, I have discovered that when someone questions my beliefs, it is helpful to counter by questioning theirs.

Me: “You like asking questions? That’s lovely. So do I. Here’s one: Where is Jesus buried?”
Questioner (Q): “How would I know? You’re the Christian. You tell me!”
Me: “Well, here’s why I ask. In the history of the world, no one—no people, no religious followers, no culture—has cared for their dead like Christianity cares for their dead. Seems like his burial place would be a pretty big deal, right?”
Q: “Right. So?”
Me: With this in mind, where did they bury Jesus?”
Q: “I don’t understand. I thought you Catholics believe that Jesus died and was buried.”
Me: “Right, and that He rose again on the third day.”
Q: “Yes. That’s ridiculous! You really believe some far-fetched things!”
Me: “Yes, I believe in the Resurrection of Jesus. But for a moment, let’s talk about what you believe instead.

“You believe that men who were deathly afraid to even be at the Crucifixion just two days earlier—one of whom was afraid to admit that he even knew Jesus—overpowered armed guards who were stationed at the tomb of Jesus. This would have meant immediate execution, so that’s pretty brave.

“Then, they rolled back a massive tombstone and stole the body of Jesus without anyone noticing.

“Then they marched through the countryside with a body without anyone recognizing them, or finding it strange that they were carrying the crucified body of the most recognizable person in the entire nation.

“Then, they hid the body somewhere.

“Then, they all lied about it.

“Then, Christians were tortured in an effort to get somebody to talk about where the body was hidden, but no one talked. No one. Ever. It turned out to be an incredibly good hiding place because no one located the body either then, or for the past two thousand years.

“Then, they were all willing to be tortured and executed, keeping their secret about where the body was hidden, and their lie, to the grave.

“It seems like you have a lot more faith in the Apostles than even I do.

“But, would you care to tell me what the Apostles’ motivation might have been?”

At that point, Q will usually mumble something, say that he has to be somewhere else.

Parents, those who oppose the Catholic Faith will question your children, and try to get them to doubt. It’s both literally and metaphorically the oldest trick in the book—the devil used it in the Garden of Eden and little has changed since then.

Your children need more than mere knowledge of the Faith; they need to know how to defend it. That means learning how to argue. Why?

Because the world will argue with them.

We need to help them prepare a defense of truth, so that when the world doubts and questions, they will be ready.