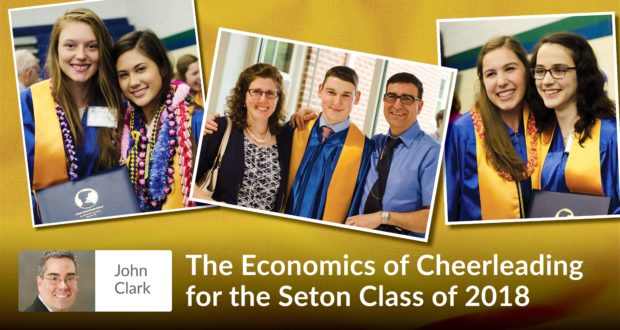 The Economics of Cheerleading for the Seton Class of 2018

Over the past three decades or so, I have worked on and off for Seton Home Study School performing a wide variety of jobs and tasks.

When I first started at Seton as a teenager, I worked as a human copy collator (before copy machines had attachments that arranged photocopies into neat little groups, people like yours truly manually performed that task for hours and hours on end).

In the years since, I have packed boxes, answered phones, filled orders for books and school supplies, cleaned bathrooms, printed out enrollment forms, and desktop-published textbooks.

A few years ago, I was given the special assignment of writing Seton’s first online high school economics course. In short, though I’ve been associated with a school for many years, I was asked to become a teacher for the first time.

The Struggles of Teaching Economics

The teaching of economics in America is plagued with two basic problems: first, it is as boring as sin; second, it is largely Marxist in approach. In writing the course, I hoped to change both of those sad circumstances.

I hoped to convey some pretty important concepts: the beauty of God’s creation, the joy of material detachment, man’s calling to practice both justice and charity in the workplace—in short, things that most economics courses fail to consider. With the help, dedication, and perseverance of some very talented Seton staff members, we finished the course a couple of years ago.

To complete the Economics course, each student must submit two essays. Though each student can choose among several essays, many of the students choose the following two options:

“A friend of yours lives in a city with a population of 100,000 people. The city has no restaurants, but has 20 milkshake stands. Your friend calls you one night and tells you that he would like to open a milkshake stand because he’s sure that he can do a better job than the other 20 milkshake stand owners. What advice would you give him?”

“You have just been elected to president of Zimbabwe. Up until this point, its currency has been disastrous. The currency has been falling in value constantly due to aggressive money printing. You have a meeting with your economic advisors after your inauguration ceremony, at which you promise to restore economic stability. What is your plan to restore stability to the currency?”

I have graded all the Economics essays that you seniors have submitted over the past year, and I want to tell you something: you have done remarkable work. Your essays have been very entertaining and technically excellent. In fact, many of these essays were of professional quality. Moreover, your thought process is impressive.

After I watch political shows in which pundits display their ignorance on economic matters, it is refreshing to read your essays. Often, I will read your essays and stop to ponder: “That’s interesting. I never considered that!” This reminds me of a quote attributed to Socrates:

“I cannot teach anybody anything. I can only make them think.”

Clearly, you Economics students have been thinking.

A Big Thank You

I also want to thank you for your kind words for me and for the economics course over the past year or two. After its introduction, Seton took a survey asking students and parents for feedback about the course.

In the aggregate (as you young economists might put it), the response has been very positive about the course and incredibly kind about me. One parent even told me that her son often laughed out loud while taking the course and couldn’t wait to get up in the morning and study his new economics lessons.

Not bad for what is often referred to as the “dismal science.” Not bad at all.

This year, just like every year, I’ll be at Seton’s graduation in Front Royal to congratulate you. But this year, for the first time, I’ll be there as a Seton teacher. Thank you for that. I am proud to have been your teacher. And when you walk up to the stage to get your diplomas, you’ll hear me.

I’ll be cheering louder than ever.