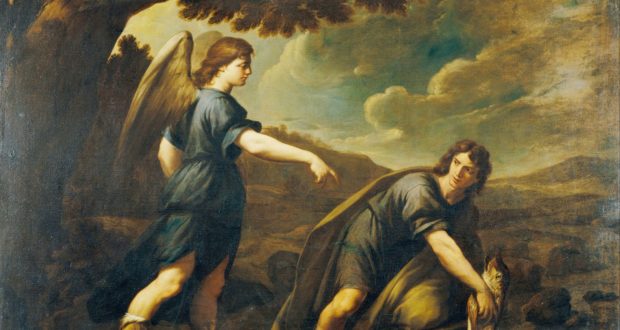 The Healing Power of Angels

Looking for insight into the healing powers of angels? You’ll find it beautifully woven into the heart-warming and so very readable Book of Tobit from The Old Testament.

Looking for insight into the healing powers of angels?

You’ll find it beautifully woven into the heart-warming and so very readable Book of Tobit from The Old Testament.

Here’s the quick overview if you are not familiar with the story of Tobit and his son Tobiah (or need a quick refresher): God answers the prayers of two of His faithful but suffering children by sending the Archangel Raphael, in the guise of a human, to Earth to heal their broken hearts and spirits.

The entire Book, full of romance, tragedy, demons, and angels is only 14 chapters long but so rich with a father’s love for his son and the fulfillment of our Heavenly Father’s promise to answer the prayers of His faithful!

To whet your appetite, here’s a snippet:

When the boy left home, accompanied by the angel, the dog followed Tobiah out of the house and went with them. The travelers walked till nightfall, and made camp beside the Tigris River. Now when the boy went down to wash his feet in the river, a large fish suddenly leaped out of the water and tried to swallow his foot. He shouted in alarm. But the angel said to him, “Take hold of the fish and don’t let it get away!” The boy seized the fish and hauled it up on the shore. The angel then told him: “Cut the fish open and take out its gall, heart, and liver, and keep them with you; but throw away the entrails. Its gall, heart, and liver make useful medicines.”

After the lad had cut the fish open, he put aside the gall, heart, and liver. Then he broiled and ate part of the fish; the rest he salted and kept for the journey. Afterward they traveled on together till they were near Media. The boy asked the angel this question: “Brother Azariah, what medicinal value is there in the fish’s heart, liver, and gall?” He answered: “As regards the fish’s heart and liver, if you burn them so that the smoke surrounds a man or a woman who is afflicted by a demon or evil spirit, the affliction will leave him completely, and no demons will ever return to him again. And as for the gall, if you rub it on the eyes of a man who has cataracts, blowing into his eyes right on the cataracts, his sight will be restored.”

When they had entered Media and were getting close to Ecbatana, Raphael said to the boy, “Brother Tobiah!” He answered, “Yes, what is it?” Raphael continued: “Tonight we must stay with Raguel, who is a relative of yours. He has a daughter named Sarah, but no other child. Since you are Sarah’s closest relative, you before all other men have the right to marry her. Also, her father’s estate is rightfully yours to inherit. Now the girl is sensible, courageous, and very beautiful; and her father loves her dearly.” He continued: “Since you have the right to marry her, listen to me, brother. Tonight I will ask the girl’s father to let us have her as your bride. When we return from Rages, we will hold the wedding feast for her. I know that Raguel cannot keep her from you or let her become engaged to another man; that would be a capital crime according to the decree in the Book of Moses, and he knows that it is your right, before all other men, to marry his daughter. So heed my words, brother; tonight we must speak for the girl, so that we may have her engaged to you. And when we return from Rages, we will take her and bring her back with us to your house.”

Tobiah objected, however: “Brother Azariah, I have heard that this woman has already been married seven times, and that her husbands died in their bridal chambers. On the very night they approached her, they dropped dead. And I have heard it said that it was a demon who killed them. So now I too am afraid of this demon. Because he loves her, he does not harm her; but he does slay any man who wishes to come close to her. I am my father’s only child. If I should die, I would bring my father and mother down to their grave in sorrow over me. And they have no other son to bury them!”

Raphael said to him: “Do you not remember your father’s orders? He commanded you to marry a woman from your own family. So now listen to me, brother; do not give another thought to this demon, but marry Sarah. I know that tonight you shall have her for your wife!