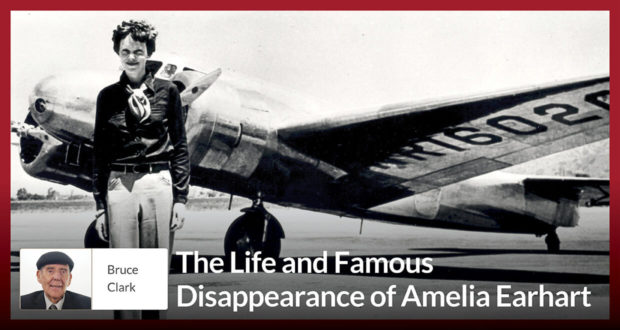 The Life and Famous Disappearance of Amelia Earhart

Seton Historian Bruce Clark ponders the story of a trailblazing American aviator and offers an alternate explanation of her mysterious disappearance.

There are thousands of unsolved mysteries to ponder over. As one might expect, men are the major subjects of these enigmas. Strangely enough, a 40-year-old lady is a principal player in America’s most famous disappearance. She was the first female pilot to fly across the Atlantic, and she disappeared over the Pacific Ocean in 1937. Her name was Amelia Earhart.

At a California air show in 1920, Amelia took her first ride in a plane. It was a ten-minute ride for a ten-dollar bill, but it changed her life. Amelia learned a great deal about aviation that year when she was not busy at her truck driver job. She saved almost every dollar she earned that year. She also cut her hair short and bought a leather jacket like the ones the female pilots wore.

All she needed then was an airplane and a pilot’s license. In the summer of 1921, Amelia purchased a second-hand, bright yellow biplane, that she nicknamed “The Canary.” Amelia became the 16th woman to receive a pilot’s license from The Federation Aeronautique.

In May, 1927, Charles Lindbergh became the first person to make a solo flight across the Atlantic Ocean. At that time, women were becoming active and accomplished, in many fields of endeavor once dominated by men.

Amelia soloed across the Atlantic, when she flew from Newfoundland to Ireland, after fighting thick fog and a faulty engine. She also flew from Hawaii to California and became the first person to fly across the two great oceans. In 1935, she joined Purdue University’s Department of Aeronautics.

An Ending Clouded in Secrecy

We now leave the world of facts and dwell in probability. In June 1937, Amelia Earhart and her navigator, Fred Noonan, left California on their around-the-world adventure and landed in Florida. They waited while a covert crew exchanged the plane’s engines with 1,000 horsepower Rolls-Royce Merlin engines, with a top speed of 400 MPH.

On July 1937, Amelia and Fred flew out of New Guinea and set out for the Japanese island of Truk. President Roosevelt was eager to know what the Japanese were hiding. At 400 MPH, cameras recorded the Japanese war materials. Mission completed, they sped toward the Itasca, a ship anchored at Howland Island, sending strong radio signals to guide Amelia.

Unfortunately, she was unable to hear those homing signals. Their plane crashed near a Japanese-held island. In 1944, when US Marines captured Saipan, an elderly lady told the Marines she had known Amelia during the war before the Japanese took her away.