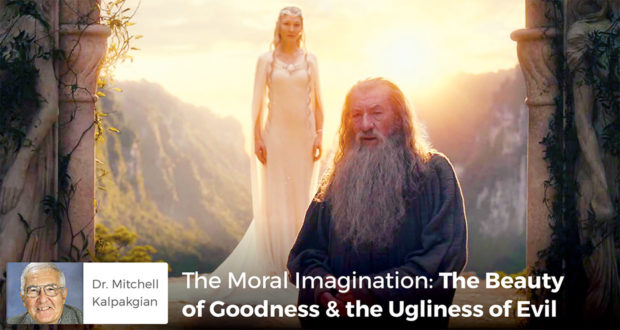 The Moral Imagination: The Beauty of Goodness & the Ugliness of Evil

Without clear ideas of what good or evil should be, we are doomed to mix them up. Dr Mitchell Kalpakgian furnishes fresh images for our moral imagination.

Many sources of knowledge lead man to an understanding of good and evil.

While God reveals this knowledge in Sacred Scripture in the form of the Ten Commandments and the Beatitudes and through the life and teachings of Christ, He also makes known the moral law through the light of reason which the Greeks and Romans called the Natural Law—knowledge “written on their hearts” that St. Paul refers to in his Letter to the Romans:

“When the Gentiles who have not the law do by nature what the law requires, they are a law to themselves, even though they do not have the law.” (Romans 2:14)

However, in addition to the Bible and the Natural Law, man possesses another faculty to gain an understanding of the meaning of right and wrong: the moral imagination. The moral imagination consists of the pictures, memories, and images of good and evil which occupy the mind and shape thought.

The Wardrobe of the Moral Imagination

These pictures and images comprise what Edmund Burke in Reflections on the Revolution in France calls “the wardrobe of a moral imagination, which the heart owns, and the understanding ratifies . . . .” The moral imagination selects the clothing that invests goodness in the most attractive form and selects appropriate attire from a wardrobe of pictures and memories in the same way human beings choose their best apparel to enhance their dignity and make them attractive.

Just as human beings wear clothing to elevate their status and distinguish them from animals, the moral imagination too dresses goodness in clothing that makes it alluring and striking. Just as Man wears clothing because he is created in the image of God, so too goodness needs an attractive outward expression because it is inherently beautiful and appealing by its very nature.

The proper use of the moral imagination, then, protects goodness from appearing dull, prosaic, and lackluster and prevents evil from looking glamorous, adventurous, and tempting. The good, after all, is not just right, moral, and dutiful but also full of wonder and irresistible appeal.

As the philosopher Simone Weil remarked about the proper and improper use of clothing in the moral realm,

Thus the proper use of the moral imagination paints good and evil in their true colors by depicting the beauty of goodness and the ugliness of evil whereas the corrupt use of the imagination misrepresents these moral realities by making virtue appear plain and vice appear glamorous.

One of the great masters of the moral imagination, Dante in The Divine Comedy accomplishes this purpose with exquisite art.

In Inferno he portrays the damned in some form of prostrate condition, either lying in a tomb like the heretics, remaining flat on their backs like the blasphemers, sitting and being pelted by a rain of fire like the usurers, buried with their head in the ground and their feet sticking out like the simonists, and frozen in ice like the traitors.

All these images of evil illuminate the grim reality of evil. Sin disfigures the image of God that man inherited as his birthright. Instead of standing erect to look above and behold the glory of God, to love and contemplate truth, and to wonder at the miracle of Creation, the damned in Hell have lowered and reduced themselves like the thieves who assume the shape of serpents or the suicides who have the shape of the stubs of a tree.

They have twisted their godlike form into unnatural shapes and positions like the soothsayers who have their heads turned backwards, the fraudulent that are immersed in a river of pitch, and the murderers dwelling in a river of blood. All these images prove beyond a doubt that evil is not romantic, adventurous, or liberating but “gloomy and barren.”

In Purgatory Dante paints the seven deadly sins in the appropriate clothing that defines their true status as “monotonous and boring”. The prideful carry heavy stones on their backs that make them stoop and look at the ground to teach them humility.

The envious have their eyelids shut tight with wire to teach them to discipline the eyes and cure them of the jealousy and covetousness that suffers misery at the happiness of others and rejoices at the suffering of the unfortunate. The wrathful live in the atmosphere of smoke that corresponds to the blind rage that ruled their passions and clouded their judgment.

The avaricious and miserly lie on their stomachs and gaze at the dirt because they gloated upon money and worshiped the gold and silver buried in the ground, never gazing above to contemplate the grandeur and majesty of God. The moral imagination, thus, makes the abstract and conceptual memorable, vivid and graphic. These pictures of the deadly sins are in no way glamorous or alluring.

The gluttonous suffer the punishment of Tantalus, standing in water while thirsting and gazing at a tree of fruit while hungering to learn to control the appetite and not make a god of their belly.

The lustful must walk through fire to purify their love and rid it of all selfish desire and uncontrollable passion.

The slothful overcome their apathy and indifference to good and evil by constant running to conquer their lack of zeal and commitment to noble causes. They need to learn from the alacrity of the Holy Mother who visited Elizabeth immediately upon learning of the news of her conception and from the hasty dispatch of Caesar’s armies.

All these images leave no doubt or any moral ambiguity about the true nature of the evil that deserves loathing or the opposing virtues of the deadly sins that inspire admiration and attraction.

A Glorious Vision of Goodness

In Paradise Dante illuminates the mystery of heavenly joy and of eternal happiness by comparing the law of God’s love to the movement of light. Everywhere in Paradise is resplendent with the beauty and attraction of the myriad forms of light (“A thousand stars appeared to me”)—the light of luminous stars, shining eyes, lustrous gems, flames of candles, and glowing rivers.

This glorious splendor adorns the goodness of love that flows and moves like a river of light.

The outpouring and overflowing of love resemble the communicative, diffusive nature of light that darts, races, and rushes in all directions. Like the pure light that shines throughout Paradise and is mirrored and refracted in a series of endless reflections, love is received, given, and circulated from all the blessed to one another and to God.

Dante writes, “I saw in far more than a thousand rows the mirroring of the souls that had returned to Paradise.”

Like light, love has movement. It spreads, illumines, transforms, and beautifies. This joyous movement of love in Paradise Dante compares to a dance “as dancers in a merry reel” and “as birds . . . fly in a circling flock . . . So in those lights the saintly creatures flew.”

Dante captures the wondrous beauty of love’s goodness in these images of light and dance which, in St. Paul’s words, make known the invisible things of God by the visible.

The blessed, the saints, and the angels come and go from God receiving love to give love and return love like a flight of bees going back and forth from their hive and the flowers—an image Dante compares to a celestial rose that is like a tiered stadium: “. . . as a drove of bees enflower themselves again, again, returning where their labor is made sweet, / Into the many-petaled flower come down, and from its leaves they rise again and go where their Love dwells in day forevermore.”

In this way love circulates in Paradise, moving like light, flowing like a river, overflowing with the joy of dancers, an endless circle of giving and receiving with God at the center, the Alpha and the Omega—the first mover and the final cause of love.

This glorious vision that fills Dante with “a speechless awe” he compares to the amazement of the barbarians “dumb with wonder” seeing Rome and the Lateran Church for the first time.

Without the moral imagination enlightening the mind with all these pictures, memories, and images of good and evil, man’s understanding could hardly grasp the sublime mystery of God’s Divine Providence, the supernatural nature of love, or the superabundant joy of everlasting life.