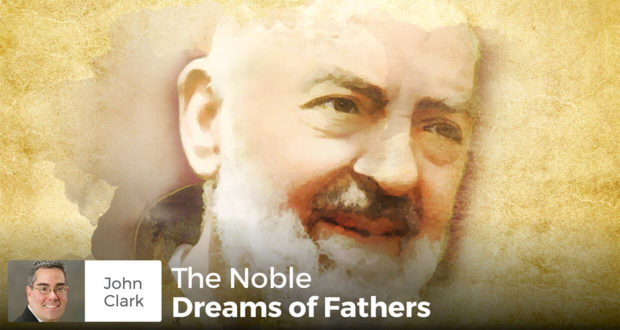 The Noble Dreams of Fathers

A story of loving fathers and noble dreams. John Clark recounts the story of a homeschool father who loved his son’s dream so much that he made it his own.

On a hot and sunny day about one hundred and twenty-five years ago, on a little Italian farm, the landscape contained a familiar image—a man tending to the needs of his land.

That man, Grazio Mario Forgione, was happily joined that afternoon by his son, whom he had named “Francesco” in honor of Saint Francis of Assisi. As Grazio worked the land that day, he assured Francesco that his son’s life would be much different from his own.

Francesco had dreamed of becoming a monk, and Grazio assured Francesco that he would provide him with an education to make that dream possible.

This was no small promise on Grazio’s part. Like many people in their little Italian town, Grazio and his wife Maria Giuseppa had very little money and were illiterate—two factors that would make the possibility of high-level academic formation more difficult.

There was a little school in town that taught very basic academics, which Francesco could (and did) attend for a few years, but that education would not provide the requisite training to be a monk. Mr. Forgione knew that the solution was to hire a private tutor for his son—in effect, to homeschool Francesco.

The problem was, tutors did not work for free, and Mr. Forgione had almost no money to hire a tutor for Francesco. Yet, he knew that this is what he must do.
The noble dreams of sons become the noble dreams of fathers.

Grazio had heard of a place in the world that was having much financial success; it was a place where a hard-working man could make much more money than he could make in Italy. It was called “America.”

So, when Francesco was still a boy, Grazio made the arduous sail to America and sent home the money for his son to be tutored, and later to attend the seminary.

Grazio came home to be reunited with his family, but he sailed once again to America for more money. Years later, after Francesco was much older, he recounted the love of his father, exclaiming, “My father crossed the ocean twice in order to give me the chance to become a friar.”

And that little boy did grow up to be a friar. In fact, little Francesco grew up to be one of the most famous priests in all the world. His life was a series of miracles: he could bi-locate, he could read hearts and souls in Confession, he was able to see angels, his love of God burned so intensely that his body temperature was once measured at 118.4 degrees!

Most uniquely, he bore the wounds of Christ—the stigmata. And rather than producing a foul odor, the sores of his stigmata emitted the scent of violets. He had a powerful devotion to Mary, and a luminous devotion to the Eucharist.

His holiness inspired millions. And though he passed on to eternal life almost fifty years ago, he continues to inspire others. He was canonized a saint in 2002 by another saint—Saint John Paul II.

You may have heard the story of Francesco, but you might know him better by the name he took when he joined the Capuchin order. Little Francesco Forgione, the boy whose father traveled to America to help him become a priest, took the name “Pio.”

Today, September 23, is his feast day.

There are many lessons we can learn from Padre Pio’s life, and we would be wise to learn more about this saint who was given as many gifts, graces, penances, and talents as almost anyone who ever lived.

But we should not overlook an obvious gift that Padre Pio was given—the gift of a wonderful father.

What was true for Grazio may also be true for many of us fathers: we leave home for work so that our children may realize their potential. Today, let’s ask Padre Pio to pray for us fathers.

That we may see the value and beauty and dignity in our work.

That we may never lose sight of why we leave every morning and why we come home every night.

That we may become fathers of saints.