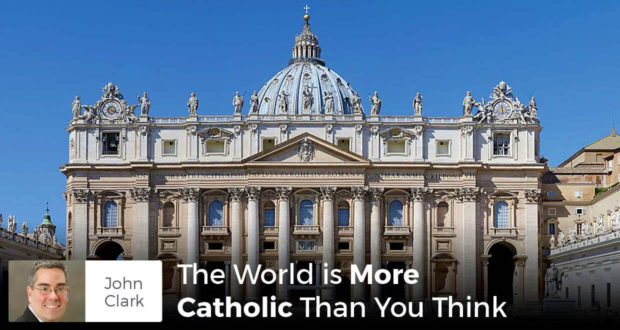 The Whole World is More Catholic Than You Think

As he was writing an online geography course for Seton Home Study School, John Clark discovered a wonderful little secret: the whole world is Catholic.

The world is Catholic. All of it.

When I was asked to write an online world geography course two years ago, I wondered if I were the right man for the job. After all, I rarely travel more than 100 miles from my home; the only foreign country I have ever been to is Canada, and I haven’t even been there for over 30 years.

But I’ve learned a lot since I started writing. And while you world travelers might be aware of a little secret already, I just discovered it myself: Planet Earth is Catholic territory. “Christendom” can be defined as those nations and lands where Christ is loved. Historically, that is a vast territory indeed.

From the deepest underground catacombs in Rome to the tallest basilica in Africa’s Ivory Coast, from the Dura-Europos Church in Syria built circa 235 to the churches under construction circa today, from the ISIS-ransacked altar in Qaraqosh, Iraq to the magnificent Gothic altar in Saint Mary’s Basilica in Krakow, Poland, the world bears an unmistakable Catholic imprint.

A tour of the world reveals the fact that God has been loved and adored by Catholics all around the Earth—even in tiny countries that you might have never heard of.

And not only do the churches, basilicas, shrines, and cathedrals witness the fact that God has been loved, but we can observe that every nation on earth still has Catholic citizens who love God.

Is Catholicism up against the ropes? Absolutely.

Is Catholicism being attacked? Definitely.

Are Catholics being persecuted? Clearly.

But when facing struggles and persecutions, the responses of millions of Catholics have echoed the words of Saint Peter: “Lord, to whom shall we go? You have the words of eternal life.”

Nero thought he could destroy the Catholic Church in Rome, yet for the 1700 years following his death, Rome has been the seat of Christendom.

Atila the Hun thought he could destroy the Catholic Church in Europe, yet it remained the most Catholic continent in the world.

Napoleon thought he could destroy the Catholic Church in France, yet while the church lived in exile, Napoleon died in exile. Today, the 800-year-old Chartres Cathedral still rings out as an enduring witness to the fact that the Church made a gallant resurgence. And Napoleon didn’t.

Mao thought he could destroy the Catholic Church in China, yet the heroic Chinese Catholics have only become more determined to worship.

Hitler thought he could destroy the Catholic Church in Poland, yet Poland not only kept the Faith, but produced a canonized pope who helped bring down communism.

Stalin thought he could destroy the Catholic Church in Ukraine, yet the Church still breathes there with both lungs, as both the Eastern and Western Catholic Churches unite in praise.

Yes, we Catholics have missionary work to do all over the globe. That has always and everywhere been the case.

But in the darkest hour, when the sun seems to be setting on hope, there is tangible and beautiful evidence of missionaries who came before us, all over the world. Instead of lacking hope, let’s be inspired by their work.

And pray for the grace to continue it.