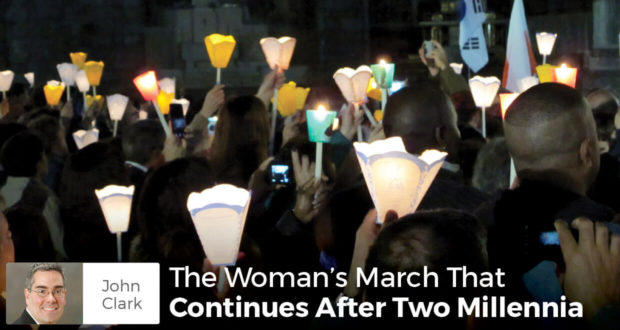 The Woman’s March That Continues After Two Millennia

After watching the Women’s March in D.C., John Clark reflected that Catholics have been marching in support of a woman for two millennia. Her name is Mary.

A few weeks ago in Washington, D.C. and other cities around the world, many people participated in Women’s Marches.

In an effort to discover why, exactly, they were marching, I tuned in to the various cable networks to watch the interviews. At least to many of the marchers who were interviewed, the precise reason for their attendance was unclear.

Like the snowflakes that fell during the interviews, no two responses were the same. And while I watched these Women’s Marches take place, I couldn’t help but think of something: the Catholic Church and her members have conducted woman’s marches for two millenia.

It is always the same woman at the front of the line, and everyone who marched behind her knew exactly why they were there. Her name is Mary. And the woman’s marches are called Marian processions. Research indicates that both Saint Basil and Saint Ambrose referenced that processions honoring Mary had been taking place long prior to their writing in the fourth century. That serves as evidence that Marian processions date back to the very early days of the church.

To put it mildly, these Marian processions have continued throughout Christian history to the present day. In fact, Marian processions occur every single day in various regions of the Catholic world. For examples, in the United States, the Great Marian Procession takes place every year in Sacramento, California.

And although thousands of Marian processions take place every year all around the world, perhaps the largest is in Belem, Brazil, where an estimated two million Catholics gather every year to process from the Cathedral to the Shrine of Our Lady of Nazareth.

Belem has the distinction of holding the greatest woman’s march in honor of the greatest woman. And if one truly wanted to understand the dignity of woman, Mary is the woman to look to. As Wordsworth poetically phrased it:

“Mother! whose virgin bosom was uncrost
With the least shade of thought to sin allied.
Woman! above all women glorified,
Our tainted nature’s solitary boast;”

Therefore the “fullness of grace” that was granted to the Virgin of Nazareth, with a view to the fact that she would become “Theotókos”, also signifies the fullness of the perfection of” what is characteristic of woman”, of “what is feminine”.   Here we find ourselves, in a sense, at the culminating point, the archetype, of the personal dignity of women….

Pope Saint John Paul II reminds us that Mary, the Mother of God, is a gentle yet powerful reminder of the august dignity of women, indeed of humanity.

What a wonderful reason for a march!

Holy Mary, Theotokos, pray for us sinners, now and at the hour of our death. Amen.