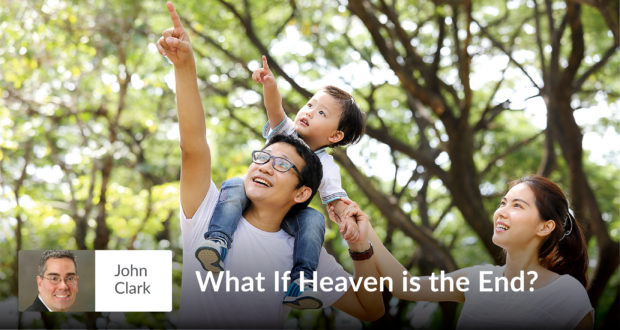 What If Heaven is the End?

As a Catholic homeschooling father, John Clark dreams that his children ultimate destination is the perfect happiness of Heaven. To call Heaven their home.

When my son Athanasius was eight years old, his batting average for the baseball season was over .900. (To be more specific for you baseball neophytes, he made a total of one out in an entire season of batting.) And so, for a few years, he and I both dreamed of the major leagues in his future.

On the way to baseball practice one day, we passed a trash truck where Athan saw men grab the metal cans and empty the contents into the truck. I told Athan that while their job was not glamorous, it was an important job; moreover, as the popes have written so often, all human work has dignity. And I told Athan, “I would be much happier if you grew up to be a Catholic trash collector than a major league baseball player who has lost his Catholic Faith. And it’s not even close.” Athan agreed.

I’ve been thinking about this conversation a lot lately. As a Seton counselor, my wife Lisa often tells me about calls she gets at work that go something like this:

“I took my daughter out of the local school four years ago because she was forced to attend sex-ed class and was belittled in class by her teacher. But, during the past few years of homeschooling, she has fallen behind. She hasn’t done a book report in three months and she’s a year behind schedule in math. She needs to catch up because her father’s dream is that she becomes a lawyer just like him when she grows up. So I’m thinking about putting her back in school.”

Lisa will then ask the mother how well her daughter is learning the Faith, to which the mother will respond that her daughter has learned tons about her Faith, that she is a grade ahead in Religion class, and that she likes going to Mass every Friday with the family. But, again, her daughter needs to learn the other subjects, because…well, they dream she will be a successful lawyer one day.

(Of course, homeschooling has produced its share of exceptional legal minds, including Seton’s own Ken Clark, who has been at the forefront of the homeschooling movement for thirty years, taught courses on Constitutional Law, and submitted a notable amicus brief in a pivotal decision of the United States Supreme Court.)

At every turn, she will experience a culture that is unreceptive, hostile, and/or openly mocking of Catholicism, yet she is expected to keep and foster her Catholic Faith all along the way. Maybe she will. And she might certainly make a great lawyer. Yes, if being a great lawyer is the goal, her parents should be applauded.

Ancient Greek philosophers such as Aristotle often talked about goals, but instead of “goal,” they used the word “end.” The classic philosophical definition goes like this: “the ‘end’ is the first thing sought in intention and the last thing in execution.” Thus, if their daughter’s “end” is a good law firm, the above parents are doing everything right.

But what if her “end” is Heaven? What if perpetually sharing in the glory and happiness of God is “the first thing sought in intention, and the last thing in execution”? What if the “end” is to call Heaven her home? Well, that changes things considerably.

Whether that means hitting line drives, dazzling juries with fancy rhetoric, or taking out other’s people’s trash, the eternal end remains the same. And while we Catholics have many “ends” and goals in life, none should ever run counter to the primary goal of eternal happiness.

“But I have dreams for my children!” parents protest. So do I. But as a Catholic father, the dreams I have for my children always end the same way: the perfect happiness of Heaven. To call Heaven their home. To rest their gaze upon the face of God.

You see, Athan’s end was never home runs in the first place. Athan’s end—just like yours and mine and all of our children—was, and is, his eternal home.