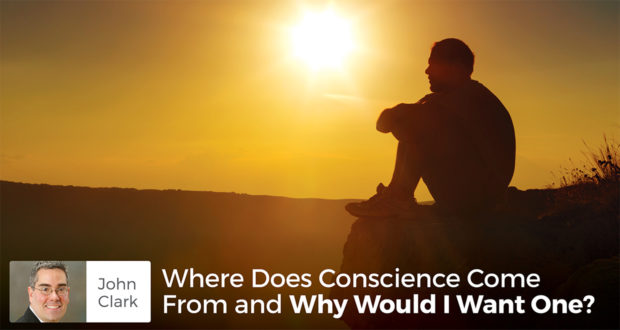 Where Does Conscience Come From and Why Would I Want One?

John Clark suggests that not only is the existence of conscience evidence for God, but it is also a powerful force to bring people nearer to Him.

Over the past few months, I have written a number of pieces on the subject of conscience.

Whether the subject was bakers, Bruce Springsteen, or the Little Sisters of the Poor, my point in each of these cases is that the freedom of conscience must be politically defended.

But before we proceed much further on a political level, it would help to take a step back and revisit and investigate the subject of conscience on a theological level.

It’s time for an examination of conscience, so to speak.

Where Does Conscience Come From?

The Catechism defines conscience as: “a judgment of reason whereby the human person recognizes the moral quality of a concrete act that he is going to perform, is in the process of performing, or has already completed.”(1778) That definition, excellent though it may be, does not tell us where conscience originates.

To understand where conscience comes from and why you have one, let’s begin by identifying what is called “eternal law.” The Catholic Dictionary defines “eternal law” as:

“The plan of divine wisdom, insofar as it directs all the actions and events of the universe. It is, therefore, the unchangeable effective decree of God binding the whole of creation to the fulfillment of its purpose, and to the use of such means for attaining this purpose as are adapted to each nature.”

Though we are spiritually damaged by original sin, which causes us to have inclination toward evil, conscience has built into it a spiritually gravitational pull back toward the good.

Conscience is directly traceable to God; in fact, you could say that conscience bears the imprint of a Creator. As Saint Paul explains in the Letter to the Romans:

“When Gentiles, who do not possess the law, do instinctively what the law requires, these, though not having the law, are a law to themselves. They show that what the law requires is written on their hearts, to which their own conscience also bears witness; and their conflicting thoughts will accuse or perhaps excuse them…”

Many practitioners in these fields have regarded this link between Creator and conscience inescapable. In a nutshell, they ask: If there is no God, where in the world—both literally and metaphorically—does conscience come from?

For instance, some anthropologists and sociologists ask: Why do all cultures in history consider things like theft and lying wrong? The variables of times, place, and cultural influences may vary, but the constant is that the moral judgment of these behaviors is not exclusively reliant on religious explanations.

They often conclude that conscience is a clear cut case of nature—not nurture.

Some epistemologists, those who study the science of knowledge, ask: Where does morality come from? How can we know that good is good, and evil, evil? And how does man, even when he is separated by external religious influences and external moral codes, tell the difference between the two? Of course, the answer is not external, but internal—intrinsic—to man.

Relatedly, why does man feel guilt? In The Problem of Pain, C. S. Lewis put it this way:

“All the human beings that history has heard of acknowledge some kind of morality…And it has one characteristic too remarkable to be ignored. The moralities accepted among men may differ— though not, at bottom, so widely as is often claimed— but they all agree in prescribing a behaviour which their adherents fail to practise. All men alike stand condemned, not by alien codes of ethics, but by their own, and all men therefore are conscious of guilt.”

Why Are Consciences Different?

So the presence of conscience is a powerful argument for the existence of God.

But wait a minute! you might be thinking: If all consciences have the same origin, why do not all consciences agree on everything? Even given free will, in which man can choose to violate his conscience, how can one conscience differ from another?

To begin to answer this question, it is helpful to recognize that some men do not always follow their conscience. People are not automatons, after all; they might be guided by conscience but they are not, in the final analysis, ruled by it, especially if they do not want to be ruled by it.

Conscience may be a “law of the mind,” but people can break the law. Confession lines in Catholic Churches consist of people who are cognizant of the fact that they turned against their consciences.

They knew that they shouldn’t have indulged in a third ice-cream sundae, or gossiped, or had impure thoughts. But to their credit, these penitents admit that they violated their conscience. They recognize that their conscience put up a “stop sign,” and they drove right through it anyway.

Sadly, from Auschwitz to Zagreb, history abounds with those who claimed they never saw the stop sign. But did they really not see it? And it is in the answer to that question where things can get a bit scary.

Some decades ago, Joseph Cardinal Ratzinger, the future Pope Benedict XVI, sought to address these difficult questions of conscience. He writes, “It is never wrong to follow the convictions one has arrived at—in fact, one must do so.” Cardinal Ratzinger is simply expressing the consistent teaching that is reflected down through the ages and is currently in the Catechism: man must follow his conscience.

“But it can very well be wrong to have come to such askew convictions in the first place, by having stifled the protest of the anamnesis of being. The guilt lies then in a different place, much deeper—not in the present act, not in the present judgment of conscience, but in the neglect of my being that made me deaf to the internal promptings of truth.”

“Certainly, one must follow an erroneous conscience. But the departure from truth that took place beforehand and now takes its revenge is the actual guilt, which first lulls man into false security and then abandons him in the trackless waste…”

“In truth it is his fault that his conscience is so broken that he no longer sees what he as a man should see.”

How do we know the difference between the two? As Saint Thomas explains to us, truth is that which is accord with reality. Conscience functions the same way. As Cardinal Ratzinger writes:

“Conscience is seen to be valid precisely because it incorporates the inner truth of things in accord with reality, which is after all the voice of the Creator.”(57) If one’s semblance of conscience leads him to believe that there is nothing wrong with such things as conducting extramarital affairs, performing abortions, blasphemy, lying, cheating, and stealing, his conscience is clearly damaged, illustrated in the fact that it does not conform to divine law.

His conscience is in need of healing.

Cardinal Ratzinger writes that conscience is a blessing, not a curse. And like many blessings, it must be fostered and nurtured. He writes:

And that same Creator endowed man with a conscience that directs man to God. Though some people lament conscience and its pangs, conscience is actually a great gift, drawing us back to the Source of all goodness, all happiness, all love.