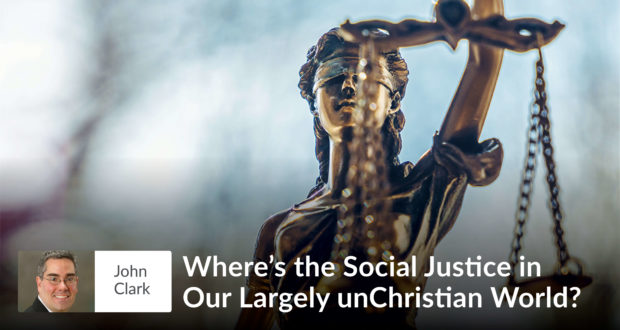 Where’s the Social Justice in Our Largely unChristian World?

For homeschoolers to make a difference in a largely unChristian world we need to command the tools of social justice – because it is a very Catholic notion.

In the online American Government and Economics courses that I recently wrote for Seton (and to a lesser extent, in the online Geography course that I am currently finishing), the concept of social justice is covered in great detail.

Considering how often the term is used in modern parlance—not to mention its underlying importance—it is perhaps surprising how little social justice is analyzed. But as homeschoolers go out to make a difference in a largely unChristian world, they need to familiarize themselves with the true concept, because social justice is a very Catholic notion.

We can begin the discussion by pointing out that social justice—if it is to have any meaning at all—is about justice. That statement should be obvious, but the fact is that the term social justice is commonly thrown around by those who cannot (or at least, do not) define justice in any systematic way.

It’s tempting to think that this is intentional because self-proclaimed social justice warriors often advance things that are indefensible from the standpoint of justice—things like government-sponsored access to contraception and mandatory abortion coverage. For our part, at the very outset of the social justice question, we must first define justice.

Not that justice is an easy concept to understand. Socrates spent a lifetime trying to figure it out and was sentenced to death for his trouble. Plato devoted volumes to the question of justice. Aristotle developed it further, and the Catholic scholastic moralists built upon Aristotle’s notion, culminating in Aquinas, who defined justice as:

“a moral quality or habit which perfects the will and inclines it to render to each and to all what belongs to them.”

Ok. We have a definition of justice. Problem solved, right?

Because it prompts the question: What is it that belongs “to each and to all”? To answer that question, we first need to understand who man is, what man is, where he came from, and what the end (or, ultimate purpose) of man is.

Modern culture (or “modernism”) suggests wealth and pleasure as probable answers regarding man’s ultimate purpose. From that perspective, anything that subtracts from my wealth and pleasure seems like a terrible injustice. Social justice then is that which grants me the most money and pleasure. This is why free access to contraception is considered a hallmark of social justice.

From the Catholic perspective, social justice is the application of justice to the relationships between and among persons, societies, and governments, coupled with the simultaneous challenge to go beyond the demands of mere justice and to treat one another with charity. And it all begins with a recognition of man’s relationship with God. Make no mistake: when social justice goes awry, it can always be traced back to misunderstanding who man is and who man’s Creator is.

Even we Catholics can forget this sometimes—or at least, act as though it isn’t true. We Catholic sometimes fail to meet the strict demands of justice, much less the inkling of charity. We are meant to hunger and thirst for justice, but in our world, it is more common that men and women hunger and thirst because of injustice.

We must teach our children how to go into that world, promoting true social justice—to recognize the face of God in the countenance of the poor and the afflicted and pray that when others look into the faces of our own children, they see the tender mercy of God.