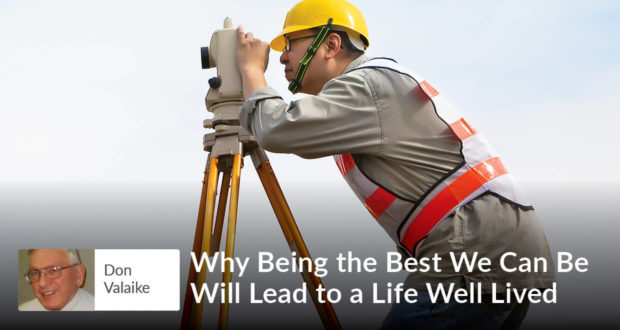 Don Valaike could not understand why his mentor was so tough on him. Only later did he realize the lesson he learned would lead to a lifetime of success.

Although I have lived for 84 years and worked for 66 years in 4 careers, including 20 years helping Seton families with their math and science lessons, I realized two things stand out the most in my life.

The first is that God loves me, and second, He has taken care of me through the people He used in my life to show His love.

The list of those whom God has sent is long and could fill a book, but I want to focus on two people and the principle of being obedient to the people with authority over you, your parents (for young people) and your supervisors in work situations (for not so young people) and the principle of always giving your best effort to every task you undertake.

Commit to Your Responsibilities

In the parental realm, I had a unique situation. My father died when I was 9, so the formative years I can remember revolved around my mother. When I was around 11, my best friend was an Altar Boy, and he invited me to become one also.

When I asked my mother for permission, she asked me if I was willing to commit myself to meet my obligations and responsibilities when I was scheduled to serve. I agreed, and everything went well until the early winter of my first year.

I was scheduled for 7:00 AM mass during a certain week, and on the first day of that week, we woke up to freezing rain and cold temperatures. I had about a mile and half walk to the church. We owned no car. As I was explaining to her the difficulty of getting to the church, she simply said, “You committed to being there when assigned so get moving. Yes, you can have my umbrella.”

In the work situation, I have told many of my students my “Barney Barnwell Story.” I enlisted in the Air Force on my 17th birthday, because there was no work available for a 16-year-old high school graduate in 1949. After completing basic training and surveying school, I was assigned to a survey crew at Eglin Air Force Base in the panhandle of Florida.

My first supervisor was a civilian local named ‘Barney’ Barnwell. Barney had been a surveyor in NW Florida all his adult life. He was a knowledgeable surveyor and was disciplined and fair to his 4-man crew of young Air Force enlistees. We learned a lot from being on his crew. However, in a short while, it was noticeable to all that he was holding me to a higher standard than the rest of the crew.

I said nothing for quite a while, then one day, when he and I were alone, I said to him, “Barney, why do you dislike me so? You are holding me to a different standard than the other guys. You are not satisfied with anything I do unless it is perfect.”

Barney smiled and said, “Don, I don’t dislike you. In fact, if I allowed myself, I could like you. From the time you joined this crew, I recognized you had the ability to be a very good surveyor. In fact, you could be very good at anything you tried. So, I decided I was not going to allow you to get comfortable with mediocrity.”

His comment did not immediately hit me as a principle for life, but it made sense. I began unconsciously to do everything in my military life to meet Barney’s standards. That resulted in earning every promotion in the first month I was eligible. At age 19, I became the youngest Staff Sergeant in the Air Force at that time.

To the Best of Your Ability

Promotions to the upper enlisted ranks required going before a Promotion Board to compete for a limited number of openings. I had been one of 35 sergeants competing for 4 staff sergeant vacancies. After the promotions were announced, I was called into the office of the senior officer on the promotion board.

He was a reserve officer called up for active duty during the Korean War. He told me that, in his civilian life, he was a member of Congress, and one of his appointments to the military academy at West Point had withdrawn recently and he could give me the appointment if I was interested.

I joyfully accepted, and we began the enrollment process. Unfortunately, my joy was short-lived when I was informed that my uncorrected vision did not meet the standards for the academy.

Disappointed, but undaunted, I completed my enlistment and on February 4, 1954 (my 21st birthday), I enrolled in the Carnegie Institute of Technology (now Carnegie Mellon University). Like most things in my life, this did not go smoothly either.

When I was accepted into Carnegie Tech at mid-term, it was with the proviso that I would catch up to the class that had enrolled the previous September, before they ended their sophomore year. This meant I had to do 2 years work in 1 1/2 years.

With great difficulty (remember I was now 5 years out of high school competing with some of the country’s best students in their first year in Carnegie Tech). I completed my sophomore year barely on time.

Unfortunately, I was out of money and something had to give. So, I had to find a job and enroll in night school. Working and going to a tough college at night is not for the faint-hearted. Fortunately, God intervened and provided a helpmate.

My meeting with Betty years earlier is another adventure worth telling, but it must wait. Many nights of her coaching/prodding and strong coffee and late nights of night school work resulted in graduation on Sept. 9, 1958.

Our first child, Mary, was due on September 8 but waited until Sept. 20 to join our family. She would later be joined by Joe, Tim, and Susan. They all heard the “Barney Barnwell” story often when I felt they needed encouragement or prodding as they were growing up. They must have listened because they are all outstanding in their chosen fields.

I have told parts of this story to many students and parents (and all of it to a few) in my years as a math and science counselor at Seton Home Study School. I felt they could benefit from the principles God has taught me in my journey. I will mention a few of these principles below that apply directly to math students and leave the rest for the readers to dig out on their own.

1. Be cheerfully obedient and loyal to the Authority in your life. First, to God as the ultimate authority (remember Jesus was obedient to The Father), then to the authority peculiar to your situation, be it a parent, teacher, supervisor, or superior.

2. Once you have enrolled in a course, commit yourself to completing the course with a superior grade by studying carefully every chapter in the text, even if you think its “old stuff.”

3. Do every problem assigned in each chapter of math. Then have someone check your answers. If you have any wrong answers, you must redo the problem on paper until you have done it correctly.

It is not acceptable to look at the problem and say, “I see where I made my mistake. I’ll have to be more careful next time.” Your mind and your eyes must see the problem done correctly.

4. Cultivate a disciplined way of doing your work, whether it’s daily work or a crucial test. I recommend what I call “The Golden Rules of Doing Math”:

Don Valaike served Seton families for twenty years as math and science counselor and source of home schooling encouragement. Mr. Valaike graduated with a B.S. in Civil Engineering from the Carnegie Institute of Technology which he applied over twenty-five years in a variety of engineering projects. He is the grandfather of two homeschooling grandchildren.