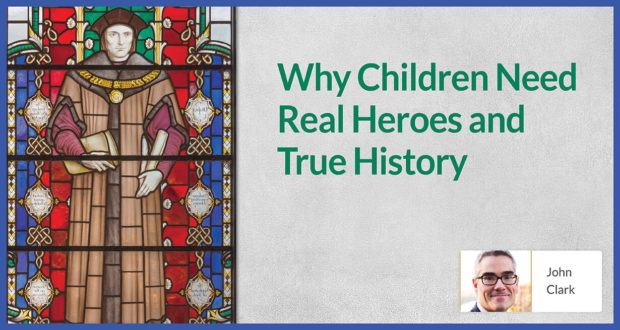 Simply put, opines John Clark, do not make heroes of men and women unless you want your children to grow up to be like these particular men and women.

Some claim that the main reason to learn history is to avoid the past mistakes of others. While there is admittedly some benefit to learning history for that reason, this is nevertheless a merely negative prohibition. But from a Catholic perspective—from a human perspective—the main reason to study history has a superlatively positive motivation. It is to learn virtue.

As all the Seton students know, my father has a great love of history. As we grew up, my father regaled my brothers and me with stories of great military commanders, epic battles, and good political leaders.

From my father’s perspective, there was no heroism—or true leadership, for that matter—without virtue. And how could there be? To reject virtue is to invite vice: the stuff of which villains are made. Of course, there are those men who are devoid of virtue but nevertheless go through the motions of leadership; however, when vicious men lead, misery follows. My father used to warn us about this sort of man.

Years prior, my dad had fought against an army of villains in the steamy, evergreen jungles of southeast Asia. On one night, in particular, my father parachuted into a hot landing zone and noticed that Viet Cong troops were shooting at him as he floated to the ground.

My father—always the mathematician—counted the bullets he could hear rip through his parachute above: “one, two, three, four…” And so—well aware of the saying that any soldier who dies in a just war while saying a prayer, will finish that prayer in Heaven—my father prayed.

Had those prayers not been answered, had one of those bullets hit its intended target, you would not be reading this column.

When your father is a decorated Green Beret, you need not conduct a search for heroes; rather, you are privileged to be a student in the “Show, Don’t Tell” classroom of virtue. Over the years, as I have tried to foster and nourish virtue in my own children, I have come to realize the blessing that my father gave me.

I have also increasingly come to appreciate the importance of choosing the right heroes; as a father, I am likely to form my children’s definition of ‘hero’ with my own.

For instance, if I view Saint Thomas More as a hero in consideration of all his virtues, my children will be influenced by that viewpoint. And just as a parent must help a child nourish and inform his conscience, so must a parent help a child nourish his concept of hero. For, in various ways and measures, it is heroes that we parents wish our children to become.

Virtue – The Key to Choosing Wisely

Problem is, choosing heroes from among the saints is often viewed as anachronistic. Even many Catholics have come to think that the performance of virtue is almost impossible, or completely impossible.

But simultaneously, we pick and choose heroes. That means we have virtue-less heroes. And rather than choosing our heroes from the communion of saints, we pick them from among the communion of sinners. We elevate public sinners to hero status.

That is not to say that we fathers should haughtily look down on those persons who publicly commit objectively serious sins, but neither should we look up to them.

A child watches his father’s eyes. A child takes note of those who earn the admiration of his father—and very often, the child wants to join the ranks of the admired.

That’s a thought to take seriously.

Simply put, fathers, do not make heroes of men and women unless you want your children to grow up to be like these particular men and women.

Saint Augustine tells us that history is the conflict between the City of God and the City of Man. That conflict has highlighted the virtues of men and women like Saint Paul, Saint Thomas More, Saint Veronica, Saint Tarcisius, Saint Thomas Aquinas, Saint Joan of Arc, Saint Francis Xavier, Pope Saint John Paul II, and many other men and women.

The beauty of history is that it is not confined to our present world in which to find heroes. The history books that Seton has produced—and continues to produce—highlight that reality. They highlight virtue and heroism.