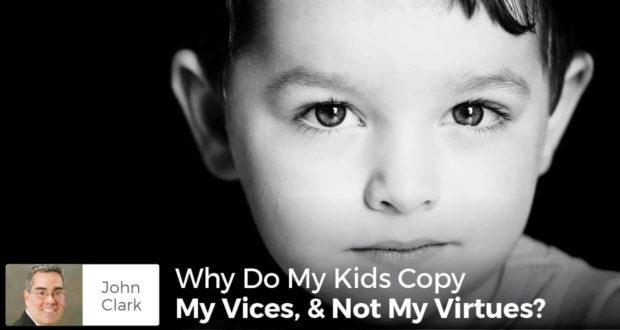 Why Do My Children Copy My Vices, & Not My Virtues?

John Clark offers the opinion that there’s not a mirror in the world that reflects so deeply and so profoundly upon our souls as the faces of our children.

When I was a younger parent maybe fifteen years ago, I remember asking Lisa:

“Why do the kids seem to get every one of my vices and none of my virtues?”

I honestly don’t remember what specifically prompted that question, but it was likely spurred by a night of them getting to bed late instead of getting a good night’s sleep, or spending too much time in front of the XBOX instead of coming to the living room for the Rosary, or arguing with each other about something silly instead of trying to get along more charitably.

Perhaps most parents go through some version of this question of lament. Why do they seem to have all my vices and none of my virtues?

But as the years go by, the more ironic—and frankly, embarrassing—that question becomes for me. The question forms what could be termed a personal moral straw man fallacy (the interrogative presumes that I had oodles and oodles of all this virtue in the first place).

But that’s not why it’s ironic.

I wish I had the intelligence of Athanasius.

I wish I had the courage of Veronica.

I wish I had the humility of Demetrius.

I wish I had the determination of Tarcisius.

I wish I had the beneficence of Philomena.

I wish I had the cheerfulness of Dominica.

I wish I had the cleverness of Bonaventure.

I wish I had the enthusiasm of Immaculata.

I wish I had the affection for God of Mary Katherine.

As a younger parent, I was proud of my children. I still am. But there comes a moment when pride becomes admiration.

There comes a day when you stop hoping that your children will become more like you, and you drop to your knees and desperately pray that you might become more like them. I sometimes ask myself if my kids are tempted to wonder the same thing today that I wondered all those years ago. Why doesn’t Dad develop our virtues?

It would be understandable to ask.

Someone once wrote that “the value of marriage is not that adults produce children, but that children produce adults.” I think I understand the meaning of those words. I think they mean that two flawed, selfish, and childish people come together and give life to children and give of themselves until they grow up.

As Jesus taught us, “Truly I tell you, unless you change and become like little children, you will never enter the kingdom of heaven.”

And children remind us what virtue is. Our Lord’s precept could not be more simple: Become like them.

People often talk about the inability to “look themselves in the mirror” if they commit some moral turpitude. But can I tell you a little secret? There’s not a mirror in the world that reflects so deeply and so profoundly upon your soul as the faces of your children. You see, the eyes of your children are windows not only to their souls, but also to your own.

And never forget that they have a lot to teach us.