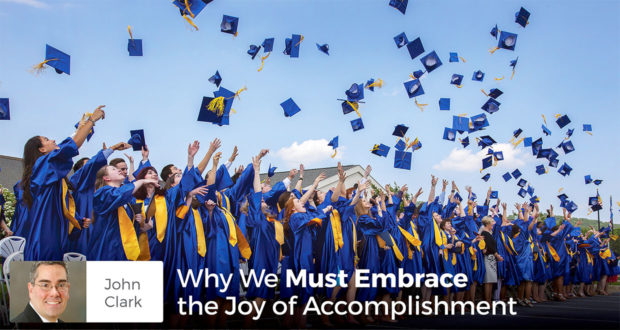 Why We Must Embrace the Joy of Accomplishment

John Clark says that the Seton Graduation is meant to embrace the joy of accomplishment but it’s become a celebration of family, friendships and the future.

Seton Home Study School began having graduation ceremonies about ten years ago. We wanted the students and their families to feel the joy of accomplishment.

We knew they deserved a day to look back and appreciate their prayers, works, joys, and tribulations: all the ingredients that go into the homeschooling recipe.

Judging by the happiness so evident in the auditorium this most recent graduation, it has been a great success, both in ways we expected and in some we didn’t.

One of the most amazing things you see at a Seton graduation is the friendships among the graduates. When you see the graduates interact with one another, you immediately forget that most of these graduates have never met each other. You see them talking, smiling, laughing, and dancing with each other, as if they have known each other their whole lives.

One may be from Texas, another from Ohio, and a third from Florida, but you might guess that they grew up on the same street.

But it is not the street that unites them; it is the familiar avenue that each one of them took to get there that day. In a way, though they have never met, they have been on the same path; somehow, instinctively, they know this. I see it happen every year and it always leaves an impression on me.

Another great moment was Dr. Clark’s powerful speech. In front of a crowd of about 700 people, Dr. Clark gave a rousing address in which she challenged the graduates to love their nation and make a powerful change for good. It’s hard to predict what you will remember after an event.

But seeing your mother receive a standing ovation—you don’t forget that.

After the graduation, I went outside and watched dozens of the graduates taking pictures with their families, complete with smiles, hugs, and tears.

You don’t forget those images either. In a culture that is increasingly rejecting the very notion of family, I remember a warm, spring afternoon in which hundreds of people were clinging to family, celebrating family, and being thankful for family.

This scene was a great reminder for me that finding purpose in life is a powerful thing, and finding that love and happiness is that purpose is remarkable, indeed.

One last thing. Beginning with the first person I met that day all the way up until the last, I received very kind words about my blogs and columns. One of the graduates told me how much she liked my columns; a young brother of a graduate told me how well I made my points and how funny the columns were.

A mother of one of the graduates commented that I was able to put the things she was thinking into printed words; another told me how much she loved my recent Canada article. One mom told me how much a certain column meant to her; in fact, she said that she often read it to inspire her to keep homeschooling.

It was almost overwhelming to receive such kind words. The life of a writer is a funny thing because, unlike in some other professions, you don’t have much personal contact with those who like your work.

And although people do occasionally thank me on my blog, it is a far better and different thing when they say “thank you” and you see the gratitude in their eyes. My hope is that they saw the gratitude for them in mine.

All in all, a wonderful day. As the saying goes, graduation is an ending but also a beginning.

And as Seton graduated its 70,000th student during this year’s ceremonies, I couldn’t help but think that tomorrow will be even brighter.

See you next year!