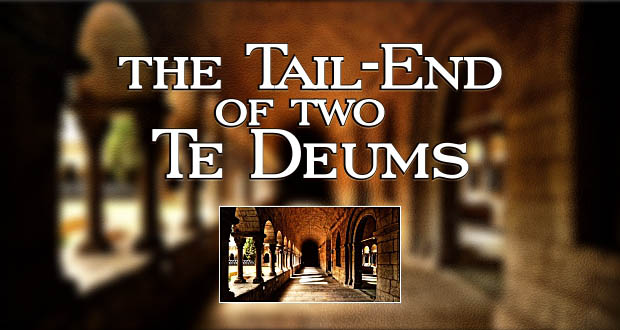 4 Things to Know about the ‘Te Deum’ in Musical History

The Te Deum is an ancient prayer of praise, dating to the 4th Century.  Traditionally ascribed to Saints Ambrose and Augustine, composed to commemorate Augustine’s baptism, scholars now also argue for the authorship of Saint Hilary or Bishop Nicetas of Remesiana.

Whoever wrote it, it has a long history in the Church.  The Te Deum forms a part of the Office at various times of the year.  Occasionally it is heard after a Mass, particularly a Mass in celebration of some significant event.

The Te Deum has quite a glorious musical history, as well.  During the development of Gregorian chant through the Middle Ages, the hymn was included in the body of prayers which merited monastic attention.  By the time liturgical music began to develop outside the monasteries and took form in the great cathedrals of Europe, it was only natural that the Te Deum would receive treatment from more secular composers.

Beginning in the early Baroque era in music and extending to the present day, examples exist of ever more complex and splendid settings of the prayer, utilizing full orchestras as well as the human voice.  Among those who set it to music were Jean-Baptiste Lully and Anton Bruckner; the Te Deum figured into the tail end of their lives, actually, and therein lies our tale.

Baroque composers generally worked as servants of wealthy nobles or Church figures, usually bishops.  Both would commission liturgical works; bishops vied with one another to present the most beautiful settings for the Mass, while nobles competed for the services of the most accomplished court composers for their private chapels.  With so many composers all attempting to out do one another, small wonder that musical styles and sophisticated techniques developed swiftly.

Jean-Baptiste Lully (born Giovanni Battista Lulli in Florence, Italy, 1632) was court composer to the royal family of France in the mid- to late 1600’s.  His music was generally of high quality and he was responsible for a great many innovations in composition and musical technique.

His life, unfortunately, did not exactly follow the same high standards.  He was actually a bit of a scamp, notorious for his public dissolute behavior.  He did, however, produce wonderful music for many occasions:  dances, incidental music for drama, chamber music for high society soirees, opera and, of course, the liturgy.  A Te Deum was obligatory for use in celebrating great events at court, so he composed a setting for the prayer in 1677.  Alas, a performance of the piece was the occasion of his downfall ten years later.

King Louis XIV had undergone a surgical procedure in 1687, which, unusually for those days, proved successful.  To celebrate his recovery, Lully conducted the Te Deum for the king.  Conducting in the days of Lully was a rather different business from the smooth showmanship of our modern era.  Time was kept not by mere gestures from the maestro, but rather by tapping a large staff on the stage!  Perhaps Lully became a little over-enthusiastic during his performance; he gave his foot a resounding thump, resulting in a rather serious wound.  Gangrene developed and Lully gave up the ghost a short time later.

The Te Deum figured into the death of another composer some two centuries later.  Anton Bruckner was perhaps the most fervently Catholic composer of all time.  Born near Linz, Austria in 1824, he developed an early aptitude for the organ, as well as some distinctly obsessive-compulsive traits.  He studied music in an obsessive fashion, for instance; he did not consider his studies complete until he was forty years old!

As a young man, he was able to take a position as organist at the monastery of Saint Florian in Linz.  Trained as a schoolteacher, he eventually was to teach music theory and composition at the Vienna Conservatory for the latter part of his life.  His students considered him a rather odd figure; most had adopted many popular secular attitudes, and they found it quite amusing when Bruckner would break off class at the ringing of the Angelus bells.  Dropping to his knees, their professor would pray the entire Angelus before rising and continuing his lessons!

Bruckner developed his own unique style of composition, especially as regards the symphony.  He revered Beethoven and Schubert, but also appreciated the musical influence of Richard Wagner.  Wagner was something of an amoral pagan; he apparently worshiped Wagner rather than God and was known to be a vicious anti-Semite.

Fortunately, Bruckner did not adopt Wagnerian social or religious viewpoints, but he did adapt many of Wagner’s musical ideas for his own use.  It might even be said that he sanctified Wagnerian orchestration, for Bruckner’s music is probably the most intensely spiritual symphonic work in the repertory.  He wrote nine numbered symphonies (we won’t delve into Symphonies 0 and 00 here!) but could not finish his ninth due to ill health.  He died in 1896 leaving the ninth still without its final movement.

Of course, Bruckner did not neglect liturgical music.  Throughout his career, he wrote a number of settings for the Mass and the Psalms, and of course, a Te Deum, completed in 1884.  As he lay dying in 1896, Bruckner regretted that he could not finish his ninth symphony, even though he had already made extensive sketches for what he had planned.  He suggested that in performance, his Te Deum could be used in place of the missing fourth movement.

An interesting exercise in music study is to take settings of the same material from differing eras and styles and do some critical comparison.  A great entertainment for an evening consists of having friends and family in for snacks and music, engaging in some serious listening and discussion.  The two pieces mentioned in this article might be an interesting place to start.

Of course, appreciating music is largely a subjective experience; a piece that is meaningful to one listener may leave another absolutely unmoved.  I am (in case the point was missed) an avid Brucknerian; my friend Patty finds Bruckner a bit bombastic.  She is devoted to choral music, while I generally prefer the orchestra.  We do, at least, agree on our love for string quartet!

So, there is no exact right and wrong in musical preference, although a strong attachment to Def Leppard might indicate a need for some remedial music education!  A taste for the work of Raymond Leppard, however, would argue a somewhat more elevated musical sensibility.

Lully and Bruckner could not be more different in era, style and personal qualities, so listening to their settings of the Te Deum should certainly yield rather different reactions.  Broadly speaking, the music of Lully follows most of the usual Baroque compositional conventions.  There is a series of alternating fast/slow sections, some provision for improvised ornamentation, and a steady predictable progression of the music from beginning to end.  Baroque music is much like a stately court dance; all the figures know very well their own prescribed movements and they all fulfill their roles to the letter. This description sounds as though the music might be somewhat dull; nothing is farther from the truth!

When well-played, Baroque music is immensely satisfying, granting a listener a gratifying experience, moving from the opening notes through a musical development and culminating in a definitive resolution of all the musical ideas.  Lully’s Te Deum might be considered a sort of liturgy, a ritual praise of God ordered in all its parts and pleasing as an offering well-made in matter and spirit.

4. A Break with the Baroque

By the time Bruckner began his career, music had undergone quite a revolution!  Whereas Baroque music adhered to certain objective conventions, the Romantic era ushered in the possibility of exposing the inner, subjective feelings of the composer in musical terms.  Musical expression was freed from many of the old conventions, and new forms were born.  In Bruckner’s music, we hear a deeply devout human being communing with God from the depths of his soul.

The Te Deum, conceived as a prayer of celebration and joy, becomes in Bruckner’s hands a surging, energetic, resounding, mighty bellow of affirmation; Bruckner metaphorically seizes the universe by the lapels and ecstatically roars, “Yes, God, existence is GREAT!”

But listen for yourselves.  For Lully’s Te Deum, try Jean-François Paillard with his own orchestra or Hervé Niquet with Le Concert Spirituel.

For truly adventurous souls, the contemporary Scots Catholic composer James MacMillan wrote a Te Deum, coupled on CD with his Seven Last Words of Christ on the Cross; fair warning, however:  MacMillan is definitely a very modern composer.  His work for voices is fascinating, but not for the faint-of-heart!