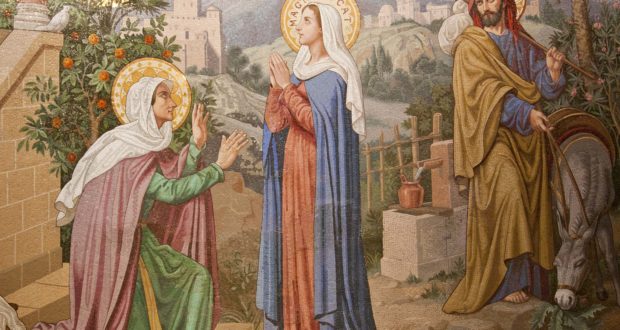 The great art of the world is Catholic art! For anyone who believes that the purpose of art is to uplift the human spirit, this statement cannot be disputed.

For many people throughout history, their devotion to God has been expressed through works of art. By creating objects of beauty, they both praise God and reflect the beauty that God has made upon the earth. Christian love is fruitful and cannot be contained merely within itself. It must be shared. Catholic art is thus the visible embodiment of the love within the hearts of its creators. 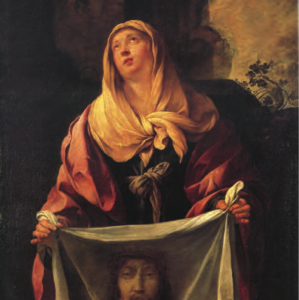 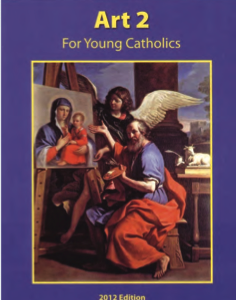 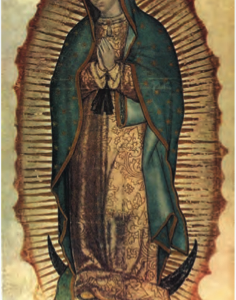 Catholic culture, especially in Europe, has brought forth magnificent art in paintings, in sculpture, and in architecture. Just as the Faith is passed down to each generation, so Catholic culture, through art, is part of the patrimony of each Catholic, which must not be lost to the apathy of the modern world.

At Seton, we have tried to keep great Catholic art alive in our textbooks. We include paintings, stained glass windows, churches, and even some sculpture in all our books. In an age when most “art” is ugly, and this ugliness is upheld as the standard of beauty, we stand in the breach and say “NO!”

Catholic art, however, is not merely beautiful. It is not merely pretty pictures, or statues, or buildings. It is meant to tell a tale and reinforce belief. It is a visible representation of the beliefs that we hold within our hearts.

Catholic art is not merely a static thing hanging upon a wall or standing on a pedestal. Catholic art is active, working to bring about a change in the viewer.

Consider, for example, the Stations of the Cross. Of course, we know what happened on the way to Calvary. We know of the falls, and of the women, and of the crucifixion. Seeing the stations, however, the reality is brought before us in a way that mere words could never do. The stations, by showing us what happened, in a sense make us part of the picture, as if we had been there to see everything that occurred.

In the same way, a rapturous painting of a saint in communion with God can move our hearts in a similar way. The soaring architecture of a cathedral, with spires reaching to heaven, makes us want to lift ourselves heavenward. The creche, with the Babe lying amongst the animals, can move us to tears of joy and gladness.

The Face of God

The tradition of religious art has been fostered in a very special and specific way within Christianity. In the Old Testament, we read that God forbade the ancient Jews from creating “graven images” which were to represent God. The reason for this is clear: no one had seen God.

When Our Lord came to earth, however, that changed. The invisible had become visible, and the indescribable God could now be depicted in art.

Jesus himself created the first Christian art when he left the image of his face upon the veil of Veronica. From this divine beginning, the tradition of icons was developed. Jesus pictured himself, and faith-filled artists did likewise.

The crucifixion itself is a striking image. Far from being hidden, Jesus was held aloft for all to see. In the Old Testament, after leaving Egypt, the Israelites were attacked by poisonous snakes in the desert. The Lord told Moses to create a staff with a snake at the top and to hold it aloft. Anyone who looked upon the staff would live. In the same way, those who look with faith upon an image of the crucifixion experience the love which leads to eternal life.

Rallying to the Faith

Art that is faith in action can become a rallying point for peoples, and even a symbol for nations. The Polish people have for centuries looked to the Black Madonna of Czestochowa for inspiration. Pious legend states that the Madonna was painted originally by Saint Luke on the cedar table top in the home of the Holy Family. In any case, the icon has been venerated since at least 1382 and is credited with saving Poland from foreign invasion on several occasions. In 1656, Our Lady of Czestochowa was named the Queen and Protectress of Poland. Today, pilgrims walk long distances and stand in lines to venerate the image.

The Crown of St. Stephen, also called the Holy Crown of Hungary, has symbolized the people and faith of Hungary since around the year 1000, when it was first used to crown St. Stephen. It was said the king ruled “in the name of the crown.” After World War II, the crown was recovered by the United States Army in Mattsee, Austria. The crown was held in Fort Knox until 1978, when it was transferred back to Hungary, then still under Communist rule. In the year 2000, upon the millennial celebration of the nation of Hungary, the crown was transferred to the Hungarian Parliament. It is also prominently displayed in the Hungarian coat of arms.

Mexico has gone through many travails over the years, but since 1531, Our Lady of Guadalupe, emblazoned upon the tilma of Juan Diego, has watched over the Mexican people. The Virgin of Guadalupe is the woman spoken of in Revelation, “clothed with the sun, and the moon under her feet, and upon her head a crown of twelve stars.” Though the people of Mexico are separated by many differences, veneration of the Virgin unites them. The shrine holding the tilma is the most visited Catholic shrine in the world. In 2009, over the December weekend commemorating the feast day of Our Lady of Guadalupe, over six million pilgrims visited the shrine. Our Lady of Guadalupe was named Queen of Mexico and Empress of the Americas by Pope Pius XII.

With such an extraordinary artistic heritage left to us, we Catholics ought not only to learn about Catholic art, but also to spread awareness and appreciation for it. The power of Catholic art has been demonstrated down through the centuries, having inspired countless individual souls, and stirred whole peoples. It has put people in touch with their fellow man through the common emotion and end of devotion; it has raised the hearts of whole nations to God.

In our own humble way at Seton, we attempt to continue that tradition by presenting to you a treasury of images from the history of Catholic art, spread throughout the pages of our textbooks. Through the communion of saints, we can add our prayers to those countless souls who have been edified by these same images, and join with them in the acknowledgment of the precious gift that is our patrimony of Catholic art.