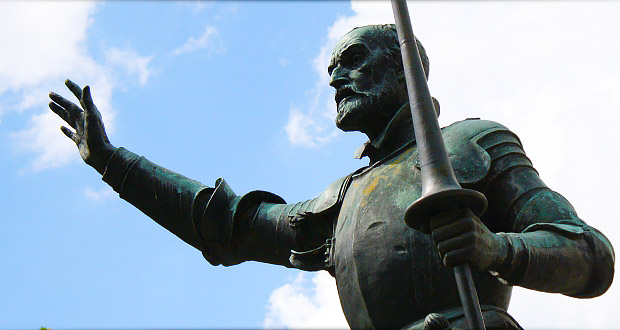 Baseball, Don Quixote and A Painter without Regrets

“Ah! but a man’s reach should exceed his grasp, or what’s a heaven for?” These famous lines from Robert Browning’s poem “Andrea del Sarto” about a faultless painter teach an important truth about the art of living.

Man by nature is idealistic, seeks excellence, and hopes for perfection, but he is bound by the weakness of human nature and the limits of the human condition. There is no such being as a faultless painter or a sinless human being. In the sport of baseball every player aspires to get a hit every time and bat 1.000, but even the best of batters only have an average of .300.

Every young teacher who enters a classroom hopes to illuminate the minds of every pupil and inspire a love of learning, only to discover that even his most earnest efforts motivate, at best, only one-third to one-half of his students. There is no such thing as a perfect husband, wife, marriage, or family.

The illustrious Don Quixote, enamored of the noble ideals of knight-errantry and chivalry and going in search of adventures to restore The Golden Age of manners, hospitality, and innocence to the Iron Age debased by vulgarity, avarice, and lust, finds that he suffers more defeats than victories and receives more insults than compliments.

Despite the disappointments that accompany these noble ideals and passion for excellence, the failures or shortcomings should never breed cynicism or skepticism about the beauty of the ideals. Though they may never be perfectly attained, ideals can be partially realized so long as they are contemplated, loved, admired, and imitated.

The vision of the true, the good, and the beautiful must remain constant despite the frustrations and poor results that often follow in the pursuit. A person bats .300 by desiring to bat 1.000; a teacher becomes a good teacher by striving to be an excellent teacher; a married couple achieves a happy marriage by hoping to grow in the perfection of love.

Don Quixote never restored the golden age, but he revived an imitation of knightly virtue and communicated the idealism of knight-errantry to his beloved squire Sancho Panza.

The squire who attended Quixote for the reward of a governorship instead comes to embrace the life of a squire for its riches of unforgettable experience. Sancho’s wife asks, “Now tell me, husband, what good have you got from your squireships? What petticoat have you brought me? What dainty shoes for your children?”

Sancho confesses that he brought her no gifts and no treasure but instead “things of more consequence.” The simple peasant, always preoccupied with hunger, thirst, sleep, and comfort and motivated by the promise of material gain, amazes his wife with his conversion to quixotic idealism: “. . . there’s nought in this world so pleasant as for an honest, decent man to be a squire to a knight-errant on the prowl for adventures.”

Andrea del Sarto does not produce the masterpieces he hoped to achieve because his wife Lucrezia’s demands and distractions prevent the perfection of his art. Though he acknowledges “My works are nearer heaven,” he never accomplishes his great ambition of being in a rank with masters like Raphael and Michelangelo. Like Quixote whose reach exceeded his grasp, del Sarto too resigns himself to the art of the possible rather than the ideal of the perfect: “I am grown peaceful as old age tonight./ I regret little, I would change still less.”

The love of the ideal and the attraction of the perfect need the complement of the real and the possible. Though man contemplates the stars and envisions the glorious and the sublime, he inhabits a body, walks on the earth, and is subject to human fallibility and weakness. Though galley-slaves, innkeepers, and wenches mock Quixote’s noble example of chivalry, honor, magnanimity, and service, they do not destroy his vocation of knight-errant or reduce his idealism to fantasy and nonsense.

Though Lucrezia does not value del Sarto’s genius or share his contemplation of the beautiful, he never suffers disillusionment or has any regrets about his marriage or the quest for great art. The art of living is both to be down-to-earth like a peasant or a married man aware of his wife’s desires and his family’s needs, and to be contemplative like Quixote and Andrea del Sarto—to be aware of the ways things are and the way things ought to be, to have feet planted on firm ground and eyes lifted above at the stars, to reach for the heights of excellence and the vision of  The Golden Age and to be content with humble deeds and small accomplishments.