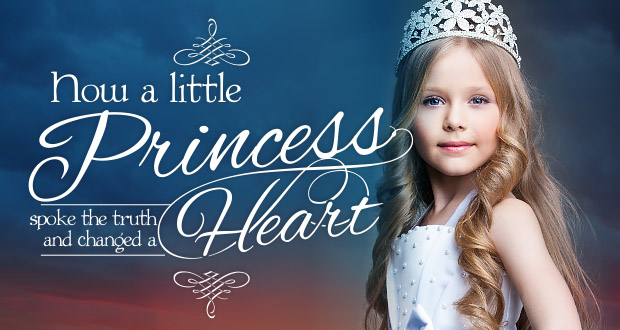 How a Little Princess Spoke the Truth and Changed a Heart

The following episodes from a children’s classic The Princess and the Goblin  illuminate the mysterious ways of Divine Providence, the way human beings are messengers of light, agents of God’s purposes in people’s lives when they speak the simple truth and bring a beam of light from above that makes all the difference in the world, leading the mind to contemplate the true, the good, and the beautiful. The great-great-grandmother symbolizes this beautiful truth in the story.

In George Macdonald’s The Princess and the Goblin the young princess Irene wanders upstairs in the castle one night and discovers an old woman who identifies herself as her great-great grandmother and who explains “I came here to take care of you.”

When Irene asks the grandmother if she arrived recently, yesterday or today, the grandmother responds, “I’ve been here ever since you came yourself.” In the story the grandmother, who is ever present in Irene’s life since birth and who protects and provides for her, represents the Divine Providence that safeguards the child.

When Irene’s nurse Lootie inquires of Irene, “Why, where can you have been, princess?” the princess answers in truthful words without exaggeration or embellishment. Irene reports that she has gone a long way upstairs to see her great grandmother, but the nurse makes fun of the little girl: “What nonsense you are talking, princess!”

Accusing the child of having dreams or inventing stories, Lootie refuses the invitation to go upstairs and see the grandmother with her own eyes. When Irene offers to lead her father the king to the grandmother’s room, he too does not take his daughter seriously. Irene pleads with him to follow her, “You won’t come up with me to see my huge, great beautiful grandmother, then, king-papa?” But he finds an excuse and politely says has not received a formal invitation. Irene communicates a heavenly message from above to below, but no one takes her words seriously.

I Don’t Believe You

After Irene receives from her grandmother a ring with a ball of thread with the instructions to follow the thread when it pulls her and go wherever it leads, she travels all the way from her bedroom to the mines under a mountain where she finds her friend Curdie buried among the rocks in the land of the evil goblins. Marveling at the astounding fact of Irene’s discovering him in the darkest regions of the mine, Curdie seeks some explanation: “But how did you find your way to me?”

Irene again utters the simple truth that she was following the thread given by her grandmother, but she receives the same reaction she encountered with her nurse and her father. Curdie also thinks Irene is joking, inventing silly stories, and playing make-believe. He tells his own mother, “She talked such nonsense! . . . and told me a pack of things that weren’t a bit true.” No one recognizes that Irene is a messenger, an agent of the grandmother who mediates between the world above and the world below.

Naturally Irene has hurt feelings when she speaks the truth and no one believes her. Upholding the teaching that a princess does not lie, Irene finds herself at a loss when she confronts so much disbelief. She complains to her grandmother, “But it wasn’t very good of him not to believe me when I was telling him the truth.” Why do Lootie, King-Papa, and Curdie not believe or see what she sees? Even when Irene takes Curdie upstairs to the room to show him the living reality of the grandmother, Curdie can only reply, “I don’t see anything”—neither the thread nor the grandmother.

The grandmother consoles Irene and offers an explanation about the nature of belief and unbelief. First, the grandmother advises, “You must give him time.” Some people by nature believe more and others less: “Curdie is not yet able to believe some things. Seeing is not believing—it is only seeing.” Irene must be “content . . . to be misunderstood for a while” even though she speaks the truth, sees the grandmother in person, remembers all the details of the room, and knows where the grandmother dwells in the castle. As a messenger she can only communicate the simple truth, not force anyone to believe.

Irene’s words to Lootie, her father, and Curdie are beams of light sent by the grandmother through the princess. Even though the truth revealed by Irene does not interest or convince those who receive her message, her words are not spoken in vain. The grandmother wants Irene to show patience and not expect instant results, for “those who believe must not be too hard upon those who believe less. I doubt if you would have believed it all yourself if you hadn’t seen some of it.”

Irene, in other words, has communicated “some” of the truth even though “all” of it is doubted. Even though Curdie thinks Irene is imagining the grandmother or fooling him with far-fetched stories, he cannot reject all she says. When Curdie complains to his mother that Irene talked nonsense, she convinces Curdie to admit “there is something about the whole affair you do not understand.” Because Curdie cannot deny that Irene found him in the cave, led him safely out of the darkness, and saved his life, his state of mind is in a state of amazement, not complete denial.

Because an innocent child with a pure heart spoke the simple truth, the idea of the grandmother and the thread occupies his mind. Although Curdie did not completely believe all Irene’s words, he cannot ignore her statements. In a state of awe at a miracle, Curdie cannot doubt the effect of being alive although he does not comprehend the mysterious cause. Curdie’s mother chides him for not believing Irene, “for fancying such a child would try to deceive you.” Irene’s words, then, have brought the truth to Curdie in a beam of light that has penetrated his mind.

She has introduced him to the notion of the grandmother at the top of the castle and the delicate thread with the gentle twitch. The idea does not disappear but assumes a life of its own as he remembers it, discusses it, reconsiders it, and ponders it again and again until he hears his mother recount an adventure in her early life when she too was lost and threatened by goblins. Suddenly “a great white light shone upon me . . . . A broad ray, like a shining road, came down from a large globe of silvery light.” What Irene told Curdie about following a thread from her grandmother corresponds to what Curdie’s mother remembers about following a beam of light “shining like silver in the sun.”

The truth introduced by Irene about the grandmother sending messengers bringing good news, emitting rays of light resembling delicate threads, and releasing pigeons in the air to make pathways in the sky receives confirmation in new and starling ways that Curdie now recognizes as a distinctive pattern, not as mere stories. Somehow a light from above appears to guide the lost, a light that appears as a ray, a beam, a thread, or a messenger like a pigeon or a princess.

Although many like Lootie and King-Papa are blind to the light and do not take Irene seriously, Curdie sees some of the light and half-believes Irene. This half-belief eventually leads to total belief when Curdie himself, following the goblins to rescue Irene from capture, feels a gentle touch and senses a thread in his fingers that leads him directly to her.

To be a messenger like Irene is to speak the simple truth and let God do the rest.