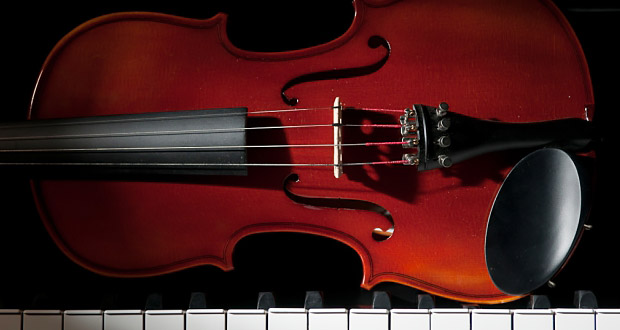 Exploring Music: An Odyssey in Beauty

Readin’, writin’, ‘rithmetic and religion are, of course, vital and irreplaceable components of any educational system. As any Seton student can attest, a great deal of effort is involved in learning all these subjects. Solid education in Truth and Goodness are drawn from these sources; they are absolutely necessary for any sort of meaningful life. Practical skills for daily life and career are based upon this academic foundation.

There is another component to life, however, which may not be directly addressed by the usual academic subjects. All too often, an education in Beauty receives very little attention. This is unfortunate for many reasons, but there are two which stand paramount in importance.

First, besides being Truth Itself and Goodness Itself, God is also Beauty Itself. An education concentrating only on Goodness and Truth is missing a large part of the equation; it is crippled by building upon only two unstable legs where a tripod is necessary.

Second, any number of studies have shown that young people trained in music and art from an early age are vastly more functional intellectually. The creative impulses exercised in art and music tickle portions of the brain which might otherwise remain largely inactive, with the result that a young mind works at a greater capacity. Knowledge is assimilated more quickly and at a deeper level. Memory is improved. Critical thinking is speedier and more often intuitively correct.

So, a series of articles concerning music begins this month. There are vast numbers of stories about music, entertaining and instructive, and some of these will serve as brief introductions to various pieces. Our hope is that the stories will entice Seton families into listening to great music and making it a vital part of their lives. In Front Royal, there are occasional meetings of the GOBs (Grumpy Old Bachelors, for those who must know) at which music is played, discussion concerning works and composers can become quite energetic, wine and cheese are consumed, and a great time is had by all. These articles are an invitation for Seton families to begin their own convivial musical gatherings of family, friends and fellow home schoolers.

Music is more readily available in our time than in any previous era. The greatest musical artists in the world, living and not so living, can now be heard in your own family room; they are no longer confined to auditorium and concert hall, or even bound by time. My own preference is for CD (though I do miss the richer sound of vinyl!) but a great deal of material is available on YouTube, MP3 and other venues much too modern for me to even comprehend. Some pieces are available at no charge, and some downloads charge only a very minimal fee. Costs can be shared among several families if a group is formed for music appreciation; CDs can be purchased and passed around among the members at times when a gathering is not practical. Be creative! The results will richly repay your efforts.

Many times I will be able to recommend certain recordings which are classics, performances which are unlikely to be surpassed by any other artist. Other times there might be a discussion of a piece which has received only limited release in the public forum, and so has limited choice. If time and resources permit, a subscription to a music review magazine or journal would be helpful. My favorite is American Record Guide, whose reviewers always include a great deal of background information on the music, the composer and the performance. Other reputable guides include Fanfare and BBC Music Magazine.

Feedback on the articles is always welcome! Suggestions for future articles, disagreements with my assessments, or even the occasional bit of praise would all be gratefully received!