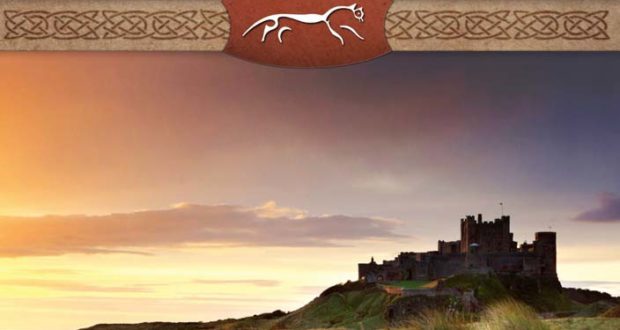 G.K. Chesterton’s ‘The Ballad of the White Horse’

This 100th anniversary edition of Chesterton’s poetic version of King Alfred’s heroic defense of Christian England from the pagan Danes is an exquisite publication.It embellishes the famous narrative and provides it with the historical background of the event, explains the poetic elements of the ballad structure of the story, and offers maps and illustrations that bring history to life.

It embellishes the famous narrative and provides it with the historical background of the event, explains the poetic elements of the ballad structure of the story, and offers maps and illustrations that bring history to life.

The footnotes on each page explain every quaint or archaic word like “shaws” (thicket) and “hod” (container for carrying stones), explicate the allusions to philosophical references like “nihilism” and “existentialism,” and incorporate valuable pieces of historical detail (“The laws of Alfred were famous for their equable treatment of all of Alfred’s subjects”).

In short, this edition makes Chesterton’s classic as lucid, graphic, concrete, and appealing as possible for readers.

The greatest attraction, of course, is the story itself and the greatness of King Alfred as a Christian hero. Chesterton’s rendition of the historical events in ballad form illuminates the Christian providential view of history, the reality of miracles and surprises as signs of God’s presence in human affairs, the Christian virtues that Alfred embodies as a man and king, and the meaning of Christian culture as a civilizing power in the pagan world.

Overwhelmed by the Danish invaders and bribing them with gold to maintain some semblance of peace, Alfred has retreated to the island of Athelney and views the future with a defeatism, especially after witnessing the ruins of burned monasteries.

Recalling the vision of the Blessed Mother in a book from his childhood, Alfred resists the despair that depresses him: “He looked, and there Our Lady was, / She stood and stroked the tall live grass / As a man strokes his steed.”

When he implores the Holy Mother “To see a secret thing,” that is, to foresee the outcome of the English conflict with the Danes, he receives a cryptic answer: “The gates of heaven are lightly locked . . . But if he fail or if he win / To no good man is told.” Alfred as Christian king must act with faith and trust in Divine Providence, not resort to the magic of foreknowledge.

The Holy Mother’s words, “Go gaily in the dark,” that urge him to “have joy without a cause” and “faith without a hope” enjoin the king to resist the Danes and prepare for war, entrusting the outcome to God’s will and cooperating with God’s divine plan rather than expecting a guarantee of victory.

Alfred as Christian king must act with faith and trust in Divine Providence, not resort to the magic of foreknowledge. The Holy Mother’s words, “Go gaily in the dark,” that urge him to “have joy without a cause” and “faith without a hope” enjoin the king to resist the Danes and prepare for war, entrusting the outcome to God’s will and cooperating with God’s divine plan rather than expecting a guarantee of victory.

When Alfred’s army clashes with the Danes, his fierce chieftains all die in battle as the English forces are routed. Why did the vision of the Holy Mother move him to battle only to suffer defeat and the loss of his great leaders—Eldred, Mark, and Colan—men who questioned the wisdom of waging war with no chance of victory?

As Eldred warns, “Why should my harmless hinds be slain / Because the chiefs cry war again . . . ? Mark sees the battle as a lost cause: “I doubt if you shall take the crown . . . .”

Nevertheless, Alfred convinces his allies that the battle is waged for the cause of Christian civilization with its belief in the goodness of Creation, the resurrection of the dead, and the glory of eternal life as opposed to the fate of the Danes’ paganism whose gods embody only death and destruction.

As Guthrum, the Danish king, laments, “There comes no noise but weeping / Out of the ancient sky, / And a tear is in the tiniest flower / because the gods must die.”

The stakes are so great, the cause is so noble, and the contrast between a Christian culture that builds, beautifies, and refines versus a pagan world that knows only violence, plunder, and destruction is so immense that Alfred views the battle as a crossroads or turning point in history: “But because it is only Christian men / Guard even heathen things.”
Surrendering to God’s mysterious will with the faith that walks in the darkness of the future, Alfred humbles himself as God’s servant and assumes a childlike trust in his heavenly father. When an old woman mistakenly views Alfred as a beggar and offers him food for the task of watching the cakes cook without burning, Alfred neglects his duty only to be struck by the irate woman with the cake he let burn: she “struck him suddenly on the face / Leaving a scarlet scar”—a surprise that not only shocks and humbles the great king but also evokes a burst of laughter, “The giant laughter of Christian men / That roars through a thousand tales, / Where greed is an ape and pride is an ass.” Even in the midst of defeat or humiliation, the Christian king imitates Christ’s meekness, never retaliating with vengeance or using power ruthlessly.

Defeated soundly by the Danes and weakened by the loss of his chieftains, Alfred— again inspired by the vision of the Mother of God on the battlefield—persists in the war, this time approaching battle like a child rather than a great king with a mighty army: “But Alfred fought as gravely / As a good child at play.” That is, like a child that builds a tower that falls but who builds the tower again and again, Alfred’s faith, hope, trust, and patience endure: “And as a child whose bricks fall down / Re-piles them o’er and o’er . . . He began his life once more.”

With a child’s immersion in play that he repeats without discouragement, Alfred again blows his horn, this time joined in battle by common laborers, “the men that tear the furrows, the men that fell the trees,” who rally to the defense of their king and nation—an effort that changes the whole course of the battle and the history of England, an effort that brings a miraculous victory over the Danes and the surprising conversion of King Guthrum.

As the story shows, in the Christian providential view of history, good can come out of evil, the future does not have to resemble the past, the Lord of surprises changes the course of human events with miracles, and saints and heroes who say “yes” to God in humility and patience and learn from the old woman and the child shape the destiny of the world. This anniversary edition reminds the whole world again of all God can accomplish with one person who goes “gaily in the dark,” has ”joy without a cause,” and fights “as gravely / As a good child at play”—a lesson for all ages.

Buy this Book from www.SetonBooks.com