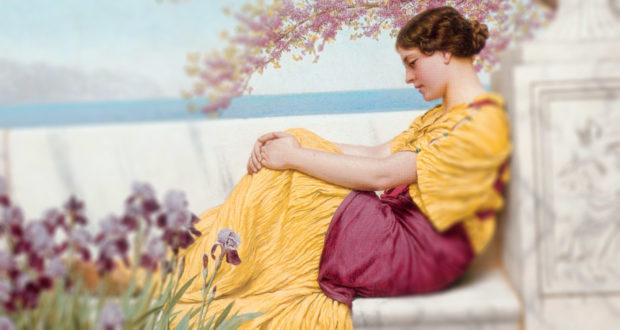 Should I Ask for an Apology – When I’m in the Right?

So often in human relationships within families or between friends arguments arise in which both parties feel absolutely convinced that they are right, that they deserve an apology for an offense they did not provoke or deserve.

This delicate situation leads to an expectation of some expression of regret or sorrow for inconsiderate behavior or insensitive conduct that caused resentment or anger. How does one resolve conflicts in which both parties feel equally innocent and mistreated?

An episode in Alcott’s Little Women provides special insight into this difficult and awkward dilemma.

In their early married life Meg and her husband John experience their first marital quarrel over a relatively minor matter that leads to great pique and wounded feelings. On the very day that Meg has been making jelly for the first time and experiencing failure and frustration because “that dreadful stuff wouldn’t jell,” John has decided to invite a guest home for dinner.

He does not feel the need to inform his wife or ask her permission because Meg had encouraged him to invite friends without forewarning: “John, dear, never stop to ask my leave, invite whom you please, and be sure of a welcome for me.”

When John arrives with his guest, he finds a disgruntled, exhausted wife weary of cooking all day and in no mood for entertaining visitors. Meg is crying in a hot kitchen in a state of disarray when John mentions that he has brought a guest a dinner.

Shocked at John’s insensitivity for not consulting her first about the appropriateness of the day and time, Meg can only react with justified anger: “Take him away at once; I can’t see him and there isn’t any dinner.” The idea of hosting a guest without an orderly home and the tasteful preparation of dinner embarrasses Meg and violates her entire sense of decorum.

Attempting to be jovial and lighthearted about Meg’s failure to make jelly, John teases his wife to brighten her mood. He quips that he will not request jelly for dinner if Meg will merely serve cold meat, bread, and cheese, only to infuriate Meg further by making her even more humiliated by his insensitive joke about the jelly.

Meg feels her husband has been cruel by his tactless comments, inconsiderate by not seeking approval beforehand for a guest, and unfeeling by not taking account of her hard day’s work. To make jelly all day, to clean a home and make it presentable, and to prepare dinner for a guest is an unrealistic demand for the impossible.

Naturally Meg expects John to apologize, act contrite, and seek her forgiveness. John, however, acts innocent and blames his wife for her irrational behavior and emotional overreaction, complaining “it wasn’t fair to tell a man to bring folks home to dinner . . . and when he took you at your word, to flame up and blame him . . . .”

Both husband and wife are expecting the other to admit fault and seek forgiveness.

With neither Meg nor John making any efforts to reconcile their differences and resolve their argument, anger ruins the harmony of marital life. However Mrs. March offers her daughter the best advice that addresses these delicate issues: “Watch yourself, be the first to ask pardon if you both err, and guard against the little piques, misunderstandings, and hasty words that often pave the way for bitter sorrow and regret.”

In arguments where the temptation of self-righteousness rules, pride, obstinacy, and intransigence spoil all efforts of forgiveness and rob a marriage of peace. Peace cannot reign in the household when self-righteousness dominates the situation. Respecting her mother’s words, Meg initiates reconciliation even though she struggles with pride. She resolves, “I will be the first to say ‘Forgive me’.”

Kissing her husband on the forehead and apologizing, Meg instantly moves John to reciprocate with his own words of apology: “It was too bad to laugh at the poor little jelly pots. Forgive me, dear, I never will again’!” Just as charity initiates love and gives spontaneously, meekness apologizes first without waiting for the other to make overtures of peace.

To delay reconciliation only hardens the heart and breeds more animosity. This same lesson Mrs. March taught her daughters in their childhood—the need to end strife immediately and not allow hidden anger to fester.

She counseled her daughter Jo, “My dear, don’t let the sun go down upon your anger; forgive each other, help each other, and begin tomorrow.”

Because younger sister Amy resented Jo’s unwillingness to allow her to attend a play with her older siblings, Amy retaliated by burning a book of stories (“the pride of her heart”) Jo had written with great labor and love. Jo reacted with equal vindictiveness, vowing “I’ll never forgive you as long as I live.”

Jo’s resentment goes so far as not only ignoring and refusing to speak to her sister but even not warning her that the ice on the pond is unsafe for skating—an episode that nearly results in a fatal accident. “She had cherished her anger till it grew strong and took possession of her, as evil thoughts and feelings always do unless cast out at once.”

Without meekness to counteract wrath, the fire of anger burns with more intense heat and sows discord in every relationship.

While John and Meg both felt justified in their anger at each other and while Jo and Amy acted as if they were the victims of cruel injustice, both parties carried some of the blame for the problem.

Disagreements in families cannot persist indefinitely, and ill feelings should not be prolonged when reconciliation requires only an effort, an honest apology, a sincere admission of fault, and the simple humility of blaming oneself as well as the other.

“Blessed are the meek, for they shall inherit the earth.”

The meek are not those who never experience anger but those who conquer it immediately rather than allow it to destroy a marriage, the bond of family, or an enduring friendship.