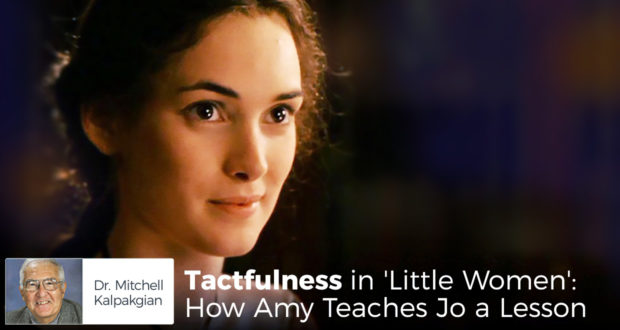 Tactfulness in ‘Little Women’: How Amy Teaches Jo a Lesson

She does not like dressing appropriately for the occasion, learning the proper protocol expected of young ladies, or engaging in conversations about fashion or opera that form the common topics at these events.

Jo does not feel any obligation to be agreeable or to conceal her strong feelings or opinions in polite society. She finds her natural inclination tends toward bluntness and honesty and does not easily hold her tongue or act demure.

In short, Jo makes light of the importance of good impressions and regards these social calls as silly conventions that stifle her self-expression and individuality. She goes to pay these social visits reluctantly, commenting “Well, I’ll go if I must, and do my best” but finds the whole experience an unnecessary waste of time: “If people care more for my clothes than they do for me, I don’t wish to see them.”

It is Jo’s younger sister Amy who insists that Jo do her duty and fulfill this “debt we owe society.” She offers Jo good advice on how to make a favorable impression, dress elegantly, and be agreeable.

She urges her sister to behave like a lady in matters of dress, conversation, and manners:

“I want you to put on your best deportment. Don’t make any abrupt remarks, or do anything odd, will you? Just be calm, cool, and quiet—that’s safe and ladylike, and you can easily do it for fifteen minutes.”

However, Jo treats the whole custom of paying visits as a laughing matter and on purpose either acts awkwardly silent or affects conviviality with gushing excess. She deliberately treats the company she dislikes with coldness or warmly welcomes the persons she enjoys with noticeable pleasure.

When Amy reproaches her sister for her poor judgment and lack of good taste in avoiding Mr. Tudor, Jo only replies, “Don’t like him, he puts on airs, snubs his sisters, and doesn’t speak respectfully of his mother.”

While Jo gladly offers to do generous favors for others (“It’s easier for me to risk my life for a person than to be pleasant to him when I don’t feel like it”), she resists tending to “the little things to please people” that Amy graciously performs because she holds that “Women should learn to be agreeable, particularly poor ones, for they have no other way of repaying the kindnesses they receive.”

The attitudes of Jo and Amy about the importance of paying social visits summarize the two opposing views on this matter.

According to Jo, this obligation is not worth the effort and is an unnecessary bother. Paying one’s debt to society is mere sham and façade; it is pretending to be agreeable or courteous when one is bored or exasperated, falsely acting gracious and affable toward people one does not approve or enjoy.

She tells Amy that she will play her part in the farce: “I’ll be agreeable, I’ll gossip and giggle, and have horrors and raptures over any trifle you like. I rather enjoy this, and now I’ll imitate what is called ‘a charming girl’.”

To Jo, these social calls demand an unnatural hypocrisy and disguise she cannot practice to ingratiate people.

According to Amy, these social visits, while not inherently enjoyable, are like the keeping of a promise or the repayment of a debt that obliges an honorable person. Because proper attire in public compliments others and respects their dignity, Amy insists that Jo put on “her best things,” “look finished,” and attend “about the little details.”

For Amy the self-command and control of the tongue that these occasions require do not repress honest feelings and true convictions but demonstrate tact, the effort not to offend or spoil the harmony of cordial relations among all people.

Sociability requires a person to converse on topics of general interest that engage the present company rather than insist on riding one’s hobby horse or becoming argumentative with opinionated ideas.

When Jo confesses that it is her misfortune to have “strong likes and dislikes” that she cannot control, Amy corrects her sister:

“It’s a greater [misfortune] not to be able to hide them. I don’t mind saying that I don’t approve of Tudor any more than you do, but I’m not called upon to tell him so; neither are you, and there is no use in making yourself disagreeable because he is.”

In other words, tact and delicacy on social occasions that demands restraint does not amount to hypocrisy or dishonesty. At the end of a day of making these social calls, Jo returns home in a state of irritability while Amy experiences the clear conscience of “one who had done her duty, kept her temper and pleased everybody.”

How Little Things Can Have Major Consequences

This episode in the novel, which Jo considered trivial and insignificant, proves to have major consequences.

The little things that Jo considered beneath her notice prove to be large things that others appreciate. Jo’s breach of manners does not go unnoticed by the older ladies or by her aunts. As one woman comments, “What a haughty, uninteresting creature that oldest March is!”

While Mrs. Chester invites Amy to her art fair, Jo does not receive an invitation to this event. Amy volunteered earlier to help at the fair when asked, but Jo showed no interest, complaining to her sister, “I hate to be patronized . . . . I wonder you consented, Amy, they only want you to work.”

When Jo once again speaks her mind and asserts her free spirit, insisting “I don’t like favors, they oppress me and make me feel like a slave,” Aunt Carroll decides to withhold the most special of favors–an invitation to be her guest during a tour of Europe, a favor she offers to Amy instead.

When Jo expresses disappointment and protests that Amy is too young, Mrs. March summarizes the letter she receives: “I’m afraid it is partly your own fault, dear. When Aunt spoke to me the other day, she regretted your blunt manners and too independent spirit; and here she writes, as if quoting something you had said—‘I had planned at first to ask Jo, but as “favors burden her,” and she “hates French,” I think I won’t venture to invite her.’”

As Alcott shows in the contrast between the two sisters’ manners, Amy does not pay social visits to curry favor or receive perquisites. Her civility is not insincere or self-serving but a matter of moral principle and an obligation to please (“Women should learn to be agreeable”).

Social visits are done for their own sake, for disinterested reasons, for the pleasure of others, and as an act of human dignity that honors both the visitor and the visited. Even though Amy does not appear pleasant, act properly, or dress elegantly in order to seek attention, she makes a good impression.

All persons should not only be good like Jo but also appear to be good like Amy because first impressions, while seeming of minor importance, carry major consequences as Jo learned.

As many of Aesop’s fables teach, a good deed is never lost, and grateful people remember thoughtful acts of kindness and repay them in surprising, unforeseen ways.

While Jo laments her bad luck and complains that Amy’s wishes are “always granted, mine—never,” good luck and bad luck are not entirely random or arbitrary as Mrs. March reminds Jo: “I am afraid it is partly your own fault, dear.”