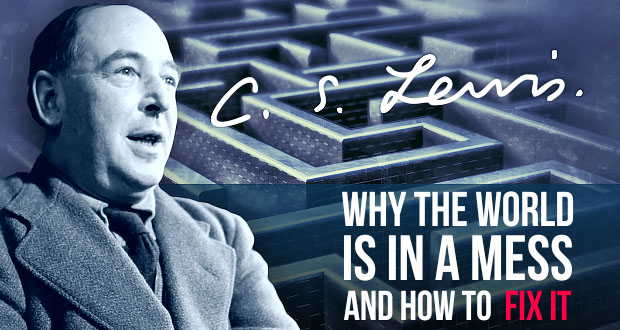 Why The World Is In a Mess, And How to Fix It

In the “Preface” to The Great Divorce C. S. Lewis explains the nature of moral error in the modern world as an endless progression on the wrong road– the assumption that all roads sooner or later lead to the same destination.

In other words, what was once condemned as evil eventually evolves into good through a process of time and change. It is the belief that “mere development or adjustment or refinement will somehow turn evil into good without our being called on for a final and total rejection of anything we should like to retain.”

Finding Your Way… In a Circle

He compares this view to the image of a circle in which all the radii meet in the center. One does not go astray or wander from the highway but merely follows one of the many by-ways that eventually join the main road in some roundabout way. According to this view, all roads lead to Heaven, and no roads go to Hell. “I’m OK, You’re OK.” As the heretical Anglican bishop in the story argues, “honest opinions” sincerely held do not count as heresies even though he rejects the Resurrection and does know recognize any “sins of intellect” besides prejudice.

This view of truth as constantly evolving, developing, and changing according to the latest progressive ideas and fashionable intellectual trends is also known as the doctrine of relativism.

Lewis presents a corrective to this view of traveling indefinitely on any road and assuming it lead eventually to the same destination all ultimately reach. Instead of the notion that all the radii of a circle join in the center, he introduces the idea of either-or choices. He compares life to a journey “where every road, after a few miles, forks into two, and each of those into two again, and at each fork you must make a decision.” To take the wrong turn not only leads astray but also compounds the error because one wrong road soon leads into two or four other paths that soon form a maze.

To continue aimlessly and endlessly traveling on a road that departs from the true path cannot ultimately lead to the same destination but only to a greater sense of error and disorientation. Every time the path diverges on the wrong road, it leads into more complications and divisions that make it virtually impossible to find one’s way.

Wandering in a Labyrinth

Instead of always going forward one needs to go back and retrace his steps to the first wrong turn. Just like an arithmetic problem that yields an incorrect answer, “A wrong sum can be put right: but only by going back till you find the error and working it afresh from that point, never by simply going on.” The modern world insists on continuing on the same path that merely multiplies one evil into two and then four until it becomes legion.

Lewis gives an example of a young man’s wrong turn in thought that leads him to condemn capitalism and embrace Communism and then reject Communism and idealize Sweden’s liberalism as the true freedom. He meanders and wanders in a labyrinth that he cannot escape unless he goes back, acknowledges his first wrong turn, and then travels on the right road.

The history of the past fifty years illustrates this wandering, aimless type of travel that leads only to more errors and aberrations. The contraceptive mentality evolved into legalized abortion, and the killing of the unborn on the basis of freedom of choice developed into the right to die and legalized euthanasia. Once the Roe v. Wade decision legalized abortion as the right to privacy and the Supreme Court considered it “settled law,” the road began dividing and subdividing into more devious courses.

The Spell Must Be Unwound

Staying on this course has led to 60 million deaths of pre-born children, the use of the right to privacy to justify euthanasia, and an unjust human law decreed by seven judges that subverted the natural law and divine law. Once the Anglican Church at the Lambeth Conference justified contraception on the basis of “hard cases” and exceptional circumstances in marriage, contraception not only eventually received legal and moral status and social approval but also gained widespread use throughout an entire culture.

From availability for difficult marriages, the use of contraception acquired respectability in the general population for married and unmarried couples and gained access to high school and college students as “safe” and “responsible” behavior that prevents pregnancy and disease. Once the traditional definition of marriage as the union of one man and one woman loses the authority of moral tradition and religious teaching, then the meaning of family, the holiness of matrimony, and the status of children also suffer deconstruction, redefinition, and revision.

The wrong road goes on forever as one evil proliferates into many by-ways that lead only into greater darkness and more perversions as one lie multiplies into hundreds. As Lewis explains, “Evil can be undone, but it cannot ‘develop’ into good. Time does not heal it. The spell must be unwound, bit by bit . . . .”

In The Great Divorce all the characters who visit the Bright World of the heavenly spirits must acknowledge the wrong turns in their life, retrace their steps, change direction, and repent for their failings before they can enter. To “convert” literally means to turn around rather than continue forward on the same path. One of the Ghosts from the Grey World must stop boasting and believing “I done my best,” “I’m a decent man,” and “I gone straight all my life.”

He must review his past and recall the hard truth the Heavenly Spirit states: “You made it hard for all of us, you know. And you made it hard for your wife and your children.” A woman complaining about her husband’s lack of ambition and initiative takes credit for motivating him to work harder, take exercise, and improve his standard of living, but she too needs to revisit the past and see the wrong turn her marriage took. The heavenly Spirit blames her constant nagging, excessive demands, and relentless criticism for her husband’s premature death from the stress of never pleasing his wife.

To go back to the right road is not to live in the past, to ignore the reality of the present, or to idealize some imaginary golden age but to travel on a tried and true path that has led generations to discover the truth, love the truth, defend the truth, transmit the truth, and even die for the truth that does not change, evolve, or develop but remains rock-like and as hard as the grass, apples, and flowers that fill the Bright World all the Spirits have reached by going backward rather than forward.