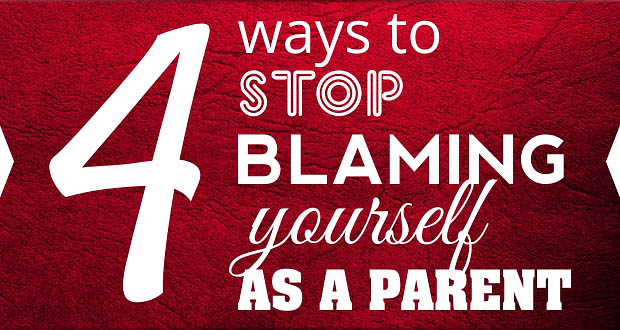 4 Ways to Stop Blaming Yourself as a Parent

You don’t get to be my age without talking to some Catholic parents whose children have left the Faith.  Though they have tried very hard to transmit the Faith to their children, homeschooling parents are not immune to children falling away.  These parents have experienced a pain that is almost unimaginable to others, and one of the worst parts of this pain is that these parents tend to blame themselves for their children’s mistake.  If you are one such parent, let me make a few suggestions.

I don’t know exactly how Jesus felt when He was betrayed by Judas.  But I do know this: Jesus did not wonder where He went wrong with Judas.  Jesus didn’t “go wrong.”

There’s a pretty good chance that you didn’t “go wrong” either.

That doesn’t stop many good parents from blaming themselves.  Thoughts that begin with “If only…” pervade their imagination and haunt their conscience.  They imagine, “If only I had read to my child more,” or “If only I hadn’t let my child use Facebook…”  But these thoughts aren’t helpful.

We tend to do this to ourselves in a number of areas of human endeavor.  As a longtime Cleveland Browns fan, I often wonder: “If only Brian Sipe hadn’t thrown that pass against the Raiders in 1980…” or “If only Earnest Byner hadn’t fumbled against the Broncos…”  It’s bad enough to have these thoughts about sports, but when you are doing this regarding your children, these thoughts can cause you to vicariously despair about your kids when you should have hope.  Still worse is when you blame your spouse.  Begin to treat those negative thoughts like you would treat lustful thoughts.  Block them out, and fill them with thoughts of hope instead.  And give yourself a break.

Second, stop thinking that you may have made some mistakes in parenting.

You did make some mistakes in parenting.  So did everyone else.

If you think that parental mistakes make you unique, you need to get out more.  St. Hilary’s parents were pagans.  St. Thomas Aquinas’ parents had him imprisoned, in an attempt to prevent him from joining the Dominican order.  St. Augustine’s father was probably worse than either of the two.  Despite lacking the benefits of proper Christian parenting, all three of these men became not only saints, but Doctors of the Church!

On the other hand, think about saints like St. Therese, St. Robert Bellarmine, and St. John of Avila.  By most accounts, they had awesome parents.  But you know what?  The parents of these saints made mistakes, too!

Remember this: regardless of parents, all of these men and women were granted free will—the same free will as your sons and daughters.  Your children used their free will to abandon what you taught them, but you must hope that they will use this same free will to return to the Church!

I think it was Father George Rutler who told the story of a man who spent an afternoon in a famous museum.  The man walked around and observed the paintings of Raphael and the sculptures of Michelangelo.  After spending four hours in the museum—unimpressed by anything—he decided he had seen enough.  On his way out, he told the museum curator, “I’m leaving.  I haven’t seen anything good here today.”

Donning a facial expression of sadness, pathos, and a tinge of anger, the curator responded: “My good man, this art was not on trial.  You were!”

You have given your children the Catholic Faith, the most precious jewel ever and always, and in various ways, they have responded like the man to the curator.  Their attraction is not to the things of God, but rather to the things apart from God.  But Jesus has experienced this “rejection,” too.   Jesus chose twelve Apostles.  One betrayed Him for small change, one denied Him three times out of fear and to gain street credibility, and ten  ran and hid when He was crucified.  Jesus understands sorrow and loss and rejection by those whom you love!  Spend an hour with Him in front of the Blessed Sacrament and cry.  And most importantly, let Him know that you trust in Him.

Fourth, give God a chance.

Long-suffering Catholic parents might feel like they had a chance to raise their kids properly, and they blew it.  Let me just tell you—you’re special.

But, no offense, you’re not that special.

When did you start to believe that the salvation of your children ultimately lay in your hands?  If you believe that, it’s no wonder that you’ve been hurting.  Take a sip of coffee and consider something: the salvation of your children ultimately lies not in you, but in God!  By the way, that’s not just the John Clark Graduate Level Parenting Class speaking; that’s a doctrine of the Faith.

When it comes to salvation—and keep in mind that this statement is coming from someone who has made a career of writing and speaking about fatherhood—good parenting is only the gravy.  The entrée is grace.  God gives everyone sufficient grace for salvation.  Good parenting may be the normal and natural channel for that grace, but for those who lack good parenting or resist it, God will choose another way.  In many cases of canonized saints that we know about (and presumably countless others that we don’t know about), God did choose another way.  The Good Shepherd never gives up.

As we pray for each other, let’s remember to say a prayer for those children who have veered off course.  Let’s ask God to overwhelm their hearts with so much grace and so powerful a love that they can no longer resist Him.  In The Way of Divine Love,  in an appearance to Sister Josefa, the Blessed Mother said, “Trust Him, for He loves you and will never forsake you.”

And for those parents who are suffering, please know that you are in our prayers.