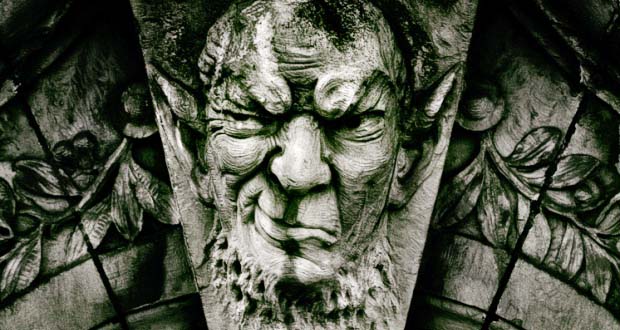 The Devil thrives on conflict and dissension. Division or “legion” is his name. Whether it is wars between nations, heresy or schism in the Church, or divorce in families, the Devil destroys human happiness by the constant temptation of strife and argument as a way of life.

In C. S. Lewis’s The Screwtape Letters, Screwtape, a master devil teaching his junior apprentice how to damn souls, recommends the technique of inciting quarrels in domestic life about trivial matters. They easily seduce people into sins of petty grudges, egotistical pride, willful stubbornness, and mean revenge. Any kind of argument on any matter of small importance suffices to accomplish the Devil’s agenda of alienating human beings from one another and breeding enmity.

The Devil advises his pupil Wormwood to discourage serious debates about moral issues or honest arguments about truth and falsehood because they awaken the mind and stir the conscience—thoughts that naturally can lead to God. But bickering, Screwtape insists, always produces the results that serve the devils’ interests. For example, Wormwood must beware of the danger of rational, logical argument because “by the act of arguing, you awake the patient’s reason; and once it is awake, who can foresee the result?” Honest debates based on evidence, facts, and self-evident truths develop “the fatal habit of attending to universal issues and withdrawing his attention from the stream of immediate sense experiences.”

On the other hand, petty arguments provoked by petulance and the use of “daily pinpricks” that produce constant complaints divide human beings easily and spoil marriages, friendships, and family relationships.

Screwtape urges his apprentice to exploit the “tones of voice and expressions of face which are almost unendurably irritating to the other.” These arguments that result from the touchiness and pique of fragile egos and unmanageable tempers assist the devils’ work by cultivating pride and self-righteousness. The devils rejoice when they instigate arguments and witness the inevitable strife that follows: “Hence from every quarrel they can both go away convinced . . . that they are quite innocent.”

The Devils’ artfulness especially succeeds when persons resort to the subtlety of “saying things with the express purpose of offending and yet having a grievance when offence is taken.”

The art of living, then, is the skill and judgment to avoid useless, unnecessary arguments that are never productive. Patience and humility, the virtues that St. Francis de Sales especially extols in Introduction to the Devout Life, fortify a person against the seeds of discord the devils sow that rouse the deadly sin of wrath that always inflicts injury and harm. In his letters of advice to Philothea, de Sales writes, “absolutely and without exception, do not be angry at all if possible, and allow no pretext whatsoever to open the gate of your heart to so destructive a passion.” As Dante illustrates in The Divine Comedy, the cure to wrath prescribes the healing medicine of the beatitudes that teach “Blessed are the peacemakers” and “Blessed are the meek.”

Quoting St. Augustine, de Sales explains the craftiness that underlies the temptation of quarrelsomeness: “For it nourishes itself under a thousand false pretexts, since there never was an angry man that thought his anger unjust.”

Screwtape prefers the mischief of arguments because both parties plead innocence and attribute guilt to the opposition. Once arguments over trivial matters incite bitter accusations, they easily lead to resentments that grow into divisions that then produce factions that cause separation or war on some level. With petty arguments come loss of love, defeat of friendship, towers of babble, and the divisiveness of parties like the High Heels and the Low Heels and the Big Endians and Little Endians in Gulliver’s Travels that quarrel about over the length of a shoe’s heel or proper end of the egg to break first: “The Animosities between these two parties run so high, that they will neither eat nor drink, nor talk with each other.”

When we pray “lead us not into temptation,” we must beware of the trap of provoking an argument or entering into a quarrel that amounts to a “pinprick.”

Do you have a favored technique to sidestep a quarrel that amounts to a “pinprick?” Take a deep breath, count to ten?