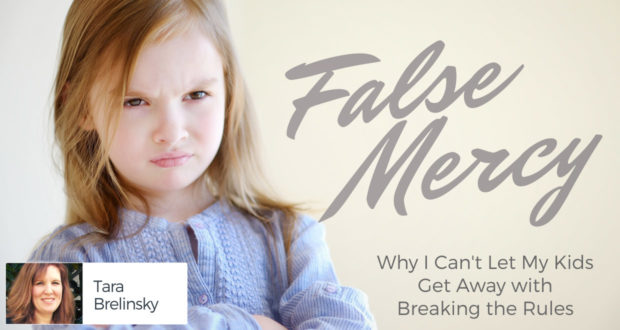 False Mercy: Why I Can’t Let My Kids Get Away with Breaking the Rules

Recently, I implemented a reward system in our household. I’ve been down this road before (many times in fact) with my older boys, but it seemed an ideal time to re-institute a temporary system of clearly defined rewards for obedience and self-control as well as an equally unambiguous list of punishments for bad conduct.

Honestly, I didn’t add anything new to the roster of expectations; rather this was simply an attempt to reorder that which had become chaotic around these parts. A rude comment here, an insult there, a push, a retaliatory shove, some name calling and lots of chores left undone, our home was becoming a battleground of wits, wills and whining.

My children took to the system like guppies to water. Left and right, I was issuing good behavior tickets that could be cashed in for screen time, fabulous Dollar Store items and coveted alone time with Mama at Chick-Fil-A. Every fifteen minute period of silent diligence during schoolwork, each obligatory assignment completed and the extra up-for-grabs odd jobs earned my younger offspring a ticket. Fresh out of the starting gate, they were raring to go.

Then a week or so into the ambitious endeavor, old ugly patterns reemerged with equal (if not greater) intensity for two children in particular, and the number of tickets I was having to retract was considerable. However, in a feeble effort to encourage greater compliance I decided to err on the side of mercy and began giving the two biggest culprits second (and third) chances.

“Oh, you called your brother a name? Well, don’t do it again or I’m definitely taking your tickets next time,” I bargained. “If you don’t stop jumping around and go to sleep, I’m gonna collect those ten tickets when I hear you again,” I threatened. I chalked it all up as mercy.

There I was dishing out another chance under the guise of mama-mercy when my husband stepped in and over-ruled me. “You know,” he pointed out, “you wrote down a list of expectations and consequences and stuck it on the fridge. Everyone knows the rules and the consequences, but you are allowing them to break the rules.”

He was right (um yeah, honey, you were right yet again). My false mercy was adding to the confusion and fueling their attraction to test the limits of my system. My lack of consistency was setting us all up for failure (in the short and long term).

My second grader is memorizing the Ten Commandments at the same time our country is in the process of litigating God’s list of precepts into irrelevancy. As his teacher and mother, I have the wisdom to understand the importance of burying those ten laws deep into his brain-matter and his heart. Life experience has taught me the natural ends of living a life in opposition to, as well as in compliance with, God’s plan, and I want to give my son the chance to choose the better path.

However, all our religion lessons are of little purpose when I am regularly asking him to recite, “Honor your father and mother,” at the same time that I’m rewarding him for unapologetically ignoring the pile of laundry on his bedroom floor and the overflowing bin of recycling. Remembering, “Thou shall not lie” is of no use if he’s getting away with lying about having brushed his teeth today (or for the last 4 days).

These lessons may be small ones today, but there are sure to be much bigger ones on the horizon. If I fail to follow through enacting the prescribed fates I have listed on our fridge, will he grow to erroneously believe that God’s Word is as pliable? Maybe as a grown-up he’ll start skipping Mass under the reasoning that calling himself spiritual is good enough to satisfy the 3rd commandment. Or when someone challenges him by saying “Love is love,” he could readily adopt that stance under the guise that God’s conditions for marriage are up for redefining?

As we prepare for the coming year of mercy in the Church, we need to correct our view of God’s loving mercy. While His ability to forgive surpasses our understanding and human capacity, it cannot be divorced from justice. For as much as God is merciful, He is equally just because our every action begets a natural consequence (be it intended or unintended) both now and later.

For today my son needs to learn that teasing his sister is grounds for punishment and pulling weeds in the yard earns rewards. But hopefully he (and the rest of my brood) will come to the deeper understanding that insulting a sister violates her dignity whereas pulling weeds makes way for profitable growth (and 30 minutes on the computer).

Obviously, my latest method for redirecting undesirable behavior may not prevent my children from tempting the balance of good versus evil throughout their lives, but it can potentially lay the foundation for their understanding of true mercy.

Tara K. E. Brelinsky is a home schooling mother of 8 living children, with 6 more heavenly ones. Married to her childhood sweetheart, they make their home in North Carolina where they teach Natural Family Planning, grow a garden, raise two dogs, a cat, hamster, ducks, roosters and a flock of hens (in addition to all those wonderful kids). Tara studied journalism a lifetime ago in college, but now she writes simply for the glory of God. You can read her musings and inspirations on her blog Blessings In Brelinskyville.