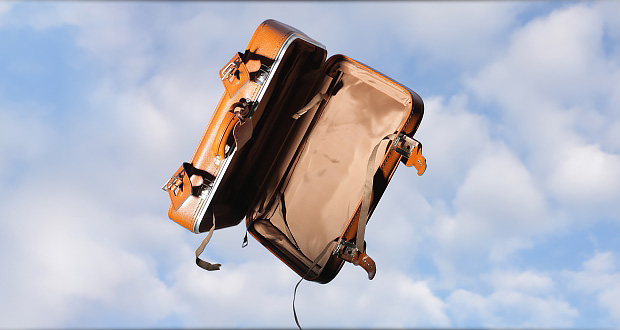 Good Character, Will Power and a Flying Trunk

The art of living demands will power, one of the most underdeveloped of human powers.

Will power increases with self-discipline and exercise. Imagine a home when someone only occasionally prepares meals; picture a business when only some of the employees come to work or arrive on time; consider a class when only some of the students once in a while do homework. Without the order of discipline, the home, business, and school do not perform the art of living well and everyone suffers.

As Aristotle and St. Thomas teach, virtue is a habit, and a habit becomes customary by repetition and will power. To acquire patience, for example, a person must begin by one act that embodies this virtue. That first example of patience makes the second attempt slightly easier; the third time patience becomes even less difficult. That is the normal process of acquiring a habit, a virtue, or will power. A good habit never acts like a mere instinct, an irrational reaction, or a mindless response. The will always acts with freedom and choice.

With enough acts of patience in the course of time, a person acquires the compliment of having “character,” a reputation for patience that follows from the many acts, from the established habit, and from the constant virtue that have earned this praise. To compliment a person for the attribute of “character” means he has proven himself again and again in a consistent, reliable way that has passed the test of time. To have character means a mark has been impressed on the nature of the person and left its stamp. No one who is erratic, fickle, or unreliable demonstrates the will power that forms discipline, habit, virtue, and character.

To be known as a person of “sterling character,” a person must achieve a proven record of integrity, good will, trustworthiness, and constancy. People with sterling character speak the truth, keep promises and vows, perform duties with diligence and responsibility, feel bound by their commitments, and do not cheat, trick, deceive, or disappoint others with lame excuses. Their will power resists the temptations of sloth and laxity, and they are not ruled by moods, weather, or other competing interests.

In the “Prologue” to the Canterbury Tales Chaucer describes the parson as a true shepherd always faithful to his vows and devoted to his flock: “His parish was large, its houses/ Far apart, but neither rain nor growling/ Thunder kept him from doors where men were sick.” Chaucer depicts a devoted knight whose noble character also reflects the virtue of habit. He always lives and acts according to the ideals of his profession, a defender of God, home, and country unwavering in his fidelity to the moral code of his calling who “held chivalry/ In his heart, and honor and truth, and courtesy/ And grace.”

The university student on the journey, the clerk of Oxford, also demonstrates the habit, discipline, and will power of the true scholar, making every sacrifice to afford his education and exerting a total effort to learn: “Clearly, he’d rather have beside his bed/ Some twenty books, all bound in black and red, / Of Aristotle and his philosophy/ Than velvet clothing, fiddles, or fine and sweet-/Tuned harps.” Spending all his money on books and never wasting time in frivolity, the scholar pursues study as a labor of love: “And gladly would he learn and gladly teach.”

In contrast to these men of sterling character, Chaucer presents a monk who cannot live according to the rule of his monastic order, an avaricious pardoner who forswears his vow of poverty because of his love of gold, and a prioress who is more fastidious about impressing the court by her manners and fashion than by honoring her vocation as nun. Without the will power to be steadfast, constant, consistent, and true in all times and all seasons, a person always disappoints and the art of civilized living declines.

Hans Andersen’s story “The Flying Trunk” illustrates all the consequences of a life without the habit of virtue and the discipline of will power. In the story the merchant’s son who wasted his money finds himself in desperate circumstances until a friend gives him a magical flying trunk. When he flies with it and descends from the sky, he introduces himself as a Turkish god who has come from above to marry the king’s daughter. Honored with this privilege, the king gladly agrees to the marriage: “Yes, you shall certainly marry our daughter.”

As the king and queen anticipate the wedding with elaborate festivities, the merchant’s son on his wedding day decides he will dazzle the entire court with a display of fireworks from his magical flying trunk: “The Turks were all jumping up in the air with excitement, so that their slippers were flying about their ears: they had never seen such an aerial display before.”

However, when everyone is waiting for the bridegroom, he is absent. He burned the trunk with the rockets and firecrackers while he was astounding the king and queen with his spectacular show: “He could fly no more: no more could he come to his bride.” The merchant’s son’s word amounts to nothing. He has no character, no integrity. He cannot be on time or even present for his own wedding. Full of pompous boasts and vain displays of empty power, he stands for nothing, substitutes show for substance, and leaves the bride and all the guests waiting for a wedding that never occurs.

When the will power to do good is absent, when virtue as a habit is never formed, when discipline is lacking in a person’s life, the consequences are always disastrous, everyone feels disappointed, the business of life is neglected, and men act infantile, weak, soft, and listless like weaklings instead of disciplined like valiant men.