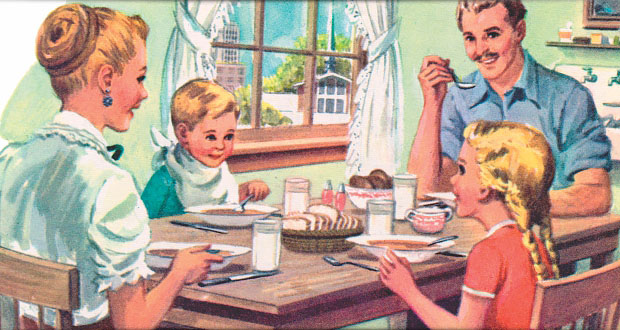 How the Family Teaches Humility and Common Sense

In one of his essays on the home, G. K. Chesterton praises the institution of the family—not for the sentiment of “home sweet home” or the peacefulness of domestic bliss—but for its uncongeniality: “Of course the family is a good institution because it is uncongenial. It is wholesome because it contains so many divergencies and varieties.”

This uncongeniality in clashes of viewpoints offers the benefit of dispelling castles in the air and illusions and restoring common sense. Uncongeniality is bracing and life-giving because it does not mince words but utters a refreshing candor.

William Saroyan, a Pulitzer Prize American writer, said that the best piece of advice he ever received came from an uncle, one who perfectly illustrates Chesterton’s point about uncongeniality. Aspiring to be a great writer, Saroyan dreamed of going to Paris and living in the Left Bank among other writers to receive inspiration and to live in the ambience of other creative artists. The idea grew in his mind until he felt confident in asking a benevolent uncle interested in his career to finance his adventure in France. Writing to him to request money for his education abroad, Saroyan waited with hopeful anticipation to hear good news from his potential benefactor.

Is that all? Is it a joke? What did his uncle mean? They meant exactly what he said.

Those words cleared the mind of nonsense. Saroyan’s uncle was acting sensible, not nice. He was a realist, not a sentimentalist. He was uncongenial but honest. If William Saroyan had the ambition, determination, and talent to become a great writer, he did not have to travel to Paris, waste his uncle’s money, or imagine that a certain literary circle of influential writers exerted a magical influence upon his creative spirit. Disappointed, of course, in receiving his uncle’s denial of the request, Saroyan later referred to those three words as the best piece of advice he ever referred. The family is uncongenial because it gives good advice—not always what a person wants to hear but what a person must know to be in contact with reality.

The family is “wholesome” as Chesterton says because it cures the mind of daydreaming about impossibilities.

The health of the family originates in the different sensibilities of men and women, the opposing temperaments of older parents and younger children, and the conflicting interests and hobbies of siblings in the same family. The healthy uncongeniality of the family produces a system of checks and balances that counteracts self-importance. Chesterton praises “The largeness and variety of the family” for its educational value, as an antidote to self-centeredness.

Chesterton writes that little brother George is not interested in a family sibling’s religious questions but most fascinated with the Trocadero Restaurant. Uncle Henry does not favor Sarah’s theatrical aspirations but foresees only a waste of time and money. Brother George and Uncle Henry are not pleasantly agreeable and voice opinions that are not soothing to the ears, but they prevent a person from making himself the center of the universe, exaggerating his talents, or presuming to be an infallible judge.

Another famous figure known for his wholesome uncongeniality is Dr. Johnson, the famous eighteenth century man of letters who was constantly advising his friends, “Clear your mind of cant.” When his friend and biographer James Boswell complained of being “vexed” by politics and asked Johnson if he too were deeply troubled by public affairs, Johnson replied that he was not “vexed” or extremely disturbed.

Such inflated talk and exaggerated sentiment was simply disingenuous: “That’s cant, Sir.” Johnson explains that he neither slept less nor ate less because of the proceedings of Parliament: “I would have knocked the factious dogs on the head, to be sure; but I was not vexed.” Johnson reminds Boswell that while he may “talk” in this manner because it is a mode of conversation, he must never “think foolishly” by overindulging in feelings at the expense of common sense.

The sanity of the family, then, consists of its ability to recognize silly ideas, hollow sentimentality, and inflated rhetoric—all so common in the public discourse of politics or academe. This uncongeniality proclaims, like the child in “The Emperor’s New Clothes,” “He’s got nothing on!” It detects what Huck Finn calls “humbug and flapdoodle” when he observes the religious frenzy of the Pokeville camp meeting eliciting donations of money to a fraudulent preacher who lies about converting the pirates on the Indian Ocean.

It expresses healthy skepticism about perfect families, perfect marriages, and perfect children. It discerns nonsense as soon as it is uttered, like David Hume’s famous boast that he was not afraid of death (“he was no more uneasy to think he should not be after this life, than that he had not been before he began to exist”) recorded in Boswell’s Life of Johnson.

Dr. Johnson’s famous reply amounts to the same reaction as Saroyan’s uncle’s letter about having the head examined: “Hold a pistol to Foote’s breast, or to Hume’s breast, and threaten to kill them, and you’ll see how they behave.”

Members of a family know each other too well to be fooled by brother’s daydream to be a millionaire, sister’s fantasy to be a great actress, or grandson’s ambition to be a professional athlete.

The family teaches humility, self-knowledge, the art of the possible, and the way things are.