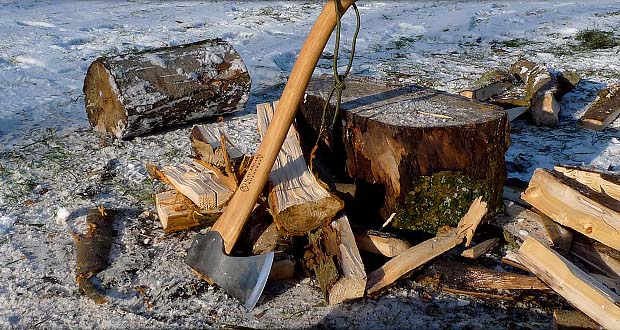 Splitting Wood, 5 Brothers and a Brickmaker

In Robert Frost’s “Two Tramps at Mud-Time” a man is cutting wood on a spring day, his favorite time of year when he especially enjoys the exercise of splitting wood when the weather has a mixture of coolness and sunshine. This work is not his livelihood but his recreation, and the month of April is “The time when most I loved my task.”

While the woodcutter feels invigorated from the physical labor, welcomes all the signs of spring, and appreciates the song of the bluebird and the beauty of the surroundings, two lumberjacks approach him and offer to do the job for payment.

These strangers think of splitting wood with axes as hard work deserving of payment and cannot imagine a person enjoying the labor as a pastime or as a form of exercise savored for its own sake. They wield axes to chop wood, and they chop wood for wages. They find inconceivable the idea of work as a type of play and cannot imagine any other reason for the wielding of an ax than the felling of trees and the earning of a living.

Reflecting on the relationship between work and play and the difference between performing a task for pleasure as opposed to doing work for pay, the woodcutter finds the separation of obligation and enjoyment unnatural and arbitrary:

But yield who will to their separation,
My object in living is to unite
My avocation and my vocation
As my two eyes make one in sight.

The Joy of Work

The art of living combines the obligation of duty with the joy of work. No one should experience work as mere drudgery during the course of the week and then welcome play during the weekend as an escape from wearisome toil. Although work and play are not the same experience, work should be a labor of love and play a restoration of energy that renews the performance of work with greater effort.

What person wants teachers for his children, doctors who treat his illness, and carpenters who build his home who do not have a sense of both vocation and avocation about their work? What a person must do by way of duty or vocation should also be what a person loves doing with a sense of true enjoyment or avocation.

Bill Russell, a former basketball player for the Boston Celtics, once introduced himself at a lecture as a “professional” and distinguished a professional from a “mercenary.” He remarked that a mercenary works to get paid while a professional “happens to get paid for what he does.” He played basketball because of his love for the game, not for the benefits of a large salary. When vocation and avocation are united, the integrity of good work, the sense of benefit to others, and the joy of the labor supersede the pursuit of wealth.

Frost explains that the humblest task done for pure reasons and disinterested motives has profound consequences:

Only where love and need are one,
And the work is play for mortal stakes,
Is the deed ever really done
For heaven and the future’s sakes.

Everyone benefits from work performed with the desire for excellence and the pleasure of serving the needs of others. While the reward of wages is momentary, good work filled with joy abounds with many fruits beyond measure and lasting effects without limit. Hans Andersen’s story “Something” illuminates the wisdom of unifying vocation and avocation as “two eyes make one in sight.”

In the folk tale, five brothers all choose their profession and perform their work with success and prosperity: a brick maker, a mason, an architect, an innovator, and a critic. However, only the oldest brother unites vocation and avocation, and only his work has effects for the future and for heaven.

They all vow, “I will be Something,” but the four younger brothers all compete to outdo each other and win the world’s highest honors and fame. The second brother viewed the simple brick maker’s work “as good as nothing” and determines he will earn more prestige as a mason who “belongs to a guild, becomes a citizen, has a banner of one’s own.” The third brother decides to surpass his older brothers with the choice of architect: “I will be one of the thinkers, the artists; I will raise myself to the aristocracy of intellect.” The fourth aspires to even greater prestige by his profession of innovator and original thinker: “I will be a genius, cleverer than all of you put together; I will create a new style . . . .” The fifth seeks the most eminent position of all, a critic: “I shall find it out, show you your faults—that will be Something!”

All the younger brothers achieve the wealth, status, and fame that accompany their rank in society. With symbols of success like the banner of the Mason’s Guild, a street named after the architect, feature stories in the newspaper, and a monument erected over a grave, the distinguished brothers all become “Something” in the eyes of the world but without the sense of vocation of the brick maker.

The humble brick maker vows to be useful to his fellow man and makes bricks because “folk cannot do without them.” He gives an old woman, poor Mother Margret, all his broken bricks and many perfect bricks for free to build a simple home. When Margaret watches the whole town skating on the ice from her home and notices the sudden approach of a storm that forebodes the cracking of the ice, she sets fire to the house to draw everyone from the danger.

When she dies and approaches the gate of heaven, the blade of straw she brings from her bed—“that bed she had set alight to save the people on the ice”—symbolizes the humble good deed that saves the townspeople, straw that is changed into gold because it is “Something.” When she pleads for the fifth brother in heaven who brings nothing, neither straw nor brick, Margaret pleads to the Angel on his behalf because of the kind deed of the oldest brother: “His brother gave me all the bricks and broken bits wherewith I built my poor little house . . . . May not all those bits and fragments, put together, be reckoned as one brick for him?”

The brick maker, of all the brothers, did his humble work of vocation and avocation “For heaven and the future’s sakes.”