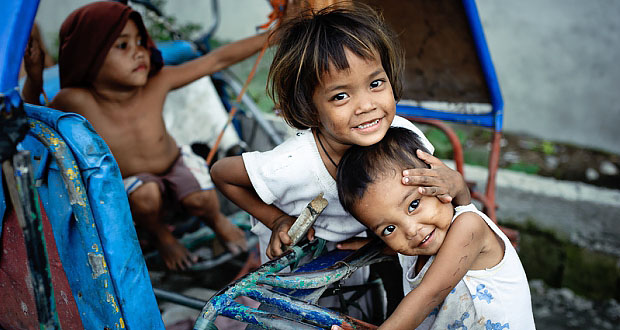 A Call to Simplicity

Learning Joy From the Poor of Cubao, the Philippines

“The very deficiency of material things enhances, enriches and increases the faith.  The less for the eyes, the more for the soul. “ – Rev. Fr. Jean-Pierre De Caussade

Glory Be To The Most Sacred Heart of Jesus!

My name is Abby Sasscer and I am a wife and homeschooling mother of three.  I grew up in the Philippines and came to the United States in 1986.  Even though I have been in America for almost thirty years, I will never forget the life lessons I learned in the short fourteen years I stayed back home.

I was the youngest of four siblings and we lived in Cubao, a suburb of Quezon City.  While we were considered a middle-class family, my parents taught us to always be content, never to live excessively, and to constantly be aware of the needs of others.  My parents lived the same words echoed by our beloved Mother Teresa:  “Live simply so others may simply live.”

And that we did.  We lived in a modest home the size of a small, two-level townhouse. Space was limited so it had to be used wisely.  Instead of having my own bedroom, I had to share my bed with three other people.  Instead of owning my own dresser,  I had to share one tall-boy dresser with my three siblings.  All the clothes I ever owned fit into one drawer.  Instead of having a television set in several rooms, we owned a small black and white TV that we could carry any place we wanted to watch television.  Instead of having shelves and shelves of books, I owned  one book called “Socks For Supper”, which I have lovingly passed on to my children.  Instead of having so many toys, all my toys could fit on top of the children’s dresser.  Don’t get me wrong.  Each child had their own special toys, but because we didn’t have much, they were truly “special” in our eyes. We didn’t own much but the little we owned, we cherished.

When my family arrived in America, I quickly noticed that despite all the material abundance this country could offer, people still seemed so discontent, unfulfilled and unhappy.  I discovered that the more people have, the more they want, and the less people have, the more thankful they are for the little they have.  So as a teenager, I made a solemn promise to live a life of simplicity. I made the solemn promise never to forget the lessons I learned from the slums of Cubao.

As a young adult, I felt the call to discern a vocation to the religious life.  I remember being so inspired by the simplicity of the convent’s guest room.  It had a bed, a statue of our Blessed Mother on top of a night stand, and a crucifix above the door.  I felt so light inside, and that I could listen to our Lord better without having my soul weighed down by so many material things.  I discovered God’s voice in the midst of simplicity and order.  When our Lord made it clear to me that I was to be a wife and mother, I so longed to bring that same simplicity and order into my future home.

Before getting married, I worked for several companies, but mostly enjoyed helping families declutter, organize and systemize their homes and offices during my spare time.  I felt that it was a way for me to parlay my love for organizing and help bring simplicity and order into people’s homes.

When I married in 1997, we lived in a small town home in Springfield reminiscent of our home in the Philippines.  We lived comfortably, but deep in our hearts, we felt our Lord wanting us to practice voluntary simplicity in a more concrete way.

So after four years of constant prayer and intense discernment, we left the city and moved into a cottage style home on Nazareth Drive in the Shenandoah Valley.  It is there that Project Nazareth was born, a ministry whose mission is to inspire and encourage families to live in a spirit of simplicity, contentment, gratitude and trust in Divine Providence… the same lessons I learned from the slum areas of the Philippines and the same lessons I wish to share with each and every one of you.

In the coming weeks I will be sharing with you some of the principles of The Simple Life that I have learned.