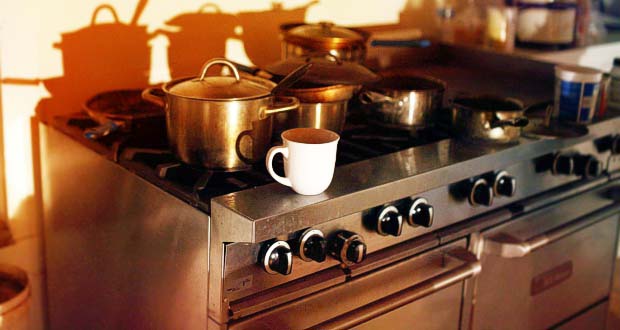 My appliances mock me. They know that I am relying on them to help make my day run smoothly, and they think this is hilarious. Many of them delight in this vicious game in which they take turns malfunctioning and then, teasingly, they recover. Well, usually.

I have prayed many a panicked novena for the life and well-being of my washing machine. He sits proudly in the laundry room beside his wife, the dryer, who squeaks unceasingly when in use. She’s clearly nagging him to take her on a long overdue vacation. She drives both of us crazy. They are getting old, those two, and I am fearful that they might be considering retirement, as I have been a demanding employer for ten years now, expecting something like twelve loads a week on average. So I am always encouragingly windexing them. I’m praying that if they look young on the outside, they will be fooled into believing that they are young on the inside.

The microwave, on the other hand, is like a toddler. When it’s done heating food, it beeps. Fine. But as I am usually busy doing something else by then, I tell it, “I’m coming. Just a minute.” It completely disregards this however and continues beeping, “mom!. . .mom!. . .mom!. . .” every other second until, in exasperation, I drop everything and run to give it my undivided attention.

The dishwasher is schizophrenic. The bottom half works perfectly. The top half doesn’t work at all. I know, I know. I already took the darn thing apart and spent an afternoon cleaning all the tubes with a Q-tip. It didn’t help. The dishwasher laughs at us as we scour dirty dishes by hand. Now I know why the dish ran away with the spoon. They were sick of all the malicious cruelty.

The stove works beautifully. But this is because it is brand spanking new! I can’t even think about the old one without feelings of rage. The day after it died, I stood defeatedly at the kitchen window, looking out to where it sat on the curb beside the busted lawn mower, and hoped they’d both be struck by lightning.

The small appliances aren’t much better. The blender worked wonderfully until I put ice cubes in it to make smoothies. Isn’t that what it was made for? The vacuum cleaner is like some snobby, rich aunt who, when coming to visit, is treated with ever-loving care and tenderness but only out of pure fear that she will suddenly disown us for some unintentional slight.

The coffee grinder broke the day I got it; not enough that I could throw it away in disgust but enough that I have to hold it just so in order to get it to work. The top of the popcorn popper melted. The rice from the rice cooker is sometimes fabulous and sometimes not. The juicer makes juice in a second but takes ten minutes to clean. The hair clippers are on strike because I didn’t oil them the last time they were used. I don’t know how well the sewing machine works. I never use it. But chances are. . . you know.

Okay, so the KitchenAid stand mixer is actually super reliable. It’s perfect and it’s a gorgeous, fire-engine red. But I think it’s showing off over there in the corner, making everybody else look bad. Somehow, this irks me; like it thinks it’s better than the rest of us. So I tend to ignore it. I hope it’s secretly insecure because, really, in the grand scheme of things, the mixer isn’t that important to me.

Unlike the fridge which has this h-i-l-a-r-i-o-u-s joke it plays on us where, when you close one of the double doors, the other one opens slightly. This is just subtle enough that we often don’t realize it has happened until sometime later.

Whenever we buy a new appliance, it is welcomed into our home with love and joy and appreciation, and I am somehow duped into thinking that it will always be this way. I look admiringly at all that shine and sparkle and think, “Ahhhh, now I can breathe easier because such and such has come to save me.” But inevitably, I am betrayed. Inevitably it too will leak or squeak or groan or cough or catch on fire and die.

The air-conditioners are giggling at me from every window as they work hard to attract lots of fuzzy dust to clean. “Very funny, guys,” I tell them. “Very funny!