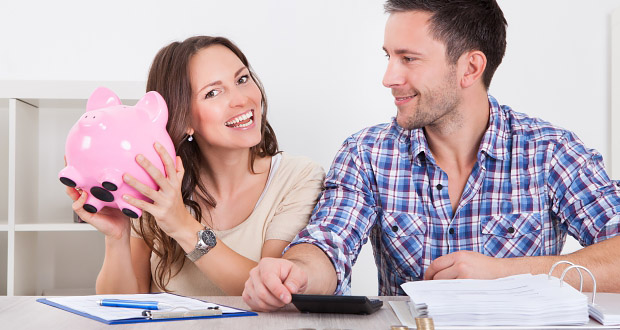 Bills, Budgeting and the Bible: How I Figured Them Out

The past few months have put a little strain on our wallets… due to that finally, a year and a half after our wedding, my husband and I are beginning to budget. I know, we probably should have started sooner, but getting over the initial hurdles of settling into an apartment, figuring out monthly bills, oh yeah, and having a baby, pushed budgeting to the back burner. Until we realized that our one bedroom apartment (cozy as it is) is getting too small for our growing family, and that we needed to seriously consider moving into a house of our own.

Reality finally began to set in. Where was the money going to come from? Funds already seemed tight, without a mortgage thrown into the mix! Besides praying to St. Joseph to help with finding the right house, we realized something had to change. So we looked into seriously working on our monthly budget. And we are now realizing we have a little more money than we thought we did.

At first, it was really frustrating. What? I had to go to the store and only buy what was on the list? No steak or ice cream, even if they were on sale? It made it slightly easier that we began this during Lent. The temptations to splurge weren’t quite so irresistible.

No extra shopping has been pretty difficult as well. Beforehand, I had justified at least one monthly shopping trip for what I convinced myself were “necessities”. Now diapers have taken first place in the line-up. New clothes for myself are rapidly descending down the list. And if I do determine that I need something (after much deliberation), my goal is to only buy it if it’s on the clearance rack. (Of course, my size is never on clearance. I’m often envious of those lucky people who always brag about finding great deals on the sales rack. I’ve finally determined they must hide out in the dressing room until the attendant hangs something on the stand, and then they instantly snatch it up. Or, they are better friends with St. Anthony than I am. Either way, I need to work on those skills!)

There has been a very fruitful side to this new practice of ours, however (besides having a little more money in the account). Budgeting has really given me a totally new perspective on two Biblical verses I had never previously considered.

The first concerns that of being a good steward. St Matthew tells us in one of Our Lord’s parables the following lesson about the good steward who has doubled his five talents: “ ‘Well done, good and faithful servant. You have been faithful over a little; I will set you over much. Enter into the joy of your master’ ” (Matthew 25:23). We are actually called to carefully watch over our possessions which have been given to us, and to use prudence in the use of those goods. And our reward is everlasting joy with the Master!

The second is that of poverty of spirit. Going back to St Matthew again, we find this beatitude: “BIessed are the poor of spirit, for theirs is the Kingdom of God” (Matthew 5:3). This was a toughie for me before. I just never actually got it. What does “poor in spirit” mean? Go, sell our possessions, and follow Christ? Our parish priest once said that poverty of spirit includes spending your money on something that will last, rather than constantly buying new (cheap) things that will cause more spending in the long run. That makes sense to me, and is a practice we are beginning to incorporate, even if it means saving up for a while for that item.

I’ve also realized I don’t need to buy name-brand clothes just for the label or as a status symbol. Poverty in spirit is a detachment from worldly possessions, especially those which are unnecessary. It also puts us in solidarity with some of our less fortunate brothers and sisters in Christ.

There have also been immediate bonuses to budgeting. Shopping at thrift stores and consignment shops is not only more rewarding, it’s actually enjoyable! I’ve realized there are many great items people throw out before they’ve even used them. So many baby clothes are barely worn, or, better yet, still have the tags attached. I also don’t have to feel guilty showing receipts to my husband after a shopping spree!

Also, staying at home for date nights instead of always going out has been a new encounter for my husband and I. We’ve gotten to have great conversations about our plans for the future… conversations we may not have had if we were out finding other forms of entertainment. And saving up for the occasional night out makes the experience so much more special.

So tomorrow when I put on my Ann Taylor, I mean Goodwill, shirt, I’ll remind myself that while skimping on earthly possessions, I’m hopefully also storing up riches in Heaven. At the same time I just may find myself a more contented person.

Liz Beller grew up in Southern California, and attended Christendom College, where she received a BA in History. After working in the Admissions Office at Christendom for two years, she married and now currently resides in Front Royal, VA, with her husband and new baby boy. Her hobbies include cooking, photography, and writing, when she isn’t otherwise occupied changing diapers!
beller bible bill budget liz 2014-05-11
Contributing Writers