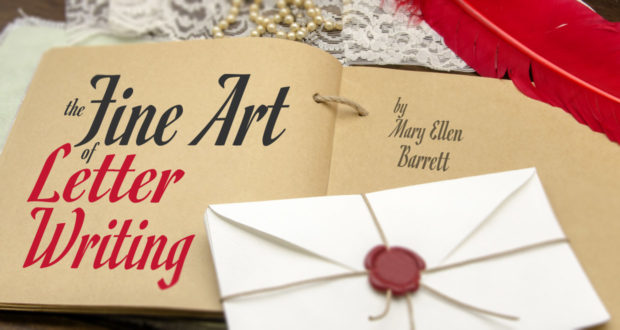 Resdiscovering the Fine Art of Letter Writing with our Kids

And none will hear the postman’s knock
Without a quickening of the heart.
For who can bear to feel himself forgotten?
~W.H. Auden

When was the last time you received a letter in the mail? A real, written with a pen, on paper letter from someone who knows you personally and took time to communicate with you in this way? Does this even happen anymore?

Rather than feeling forgotten, the current methods of communication can contrive to make us all too much available. Children are not encouraged to take time to collect their thoughts, present them well and consider the effect of the words on the recipient. It just doesn’t happen when you mostly communicate via SnapChat or texting.

It begs the question of how our society will be known when it comes to our methods of communication. Think of the insight into some of the great minds and events in history that we have because of prolific letter writers, from the letters of Pliny the Younger in 79 AD describing the eruption of Vesuvius, to the love letters of F. Scott Fitzgerald to his troubled wife Zelda.

Queen Victoria is said to have written over 3,700 letters to her daughter the Princess Royal, and Jane Austen wrote letters to her sister completely ignoring the outside world (she lived through the Napoleonic Wars and the Industrial Revolution in England) but providing a detailed look at middle class life in the late 18th and early 19th century. And of course, there are the letters of Paul whose instruction and encouragement kept the persecuted Church going in those early days.

Letters are important to the culture. I think homeschoolers can be part of the revival of the personal missive. Long ago, I designated Fridays as letter writing days in our homeschool. The time for them has ebbed and flowed, but I’ve managed to be pretty consistent in including it at least a few times a quarter. Setting aside this time, in addition to the lessons provided in various grade levels of Seton English, can serve to make letter writing a part of their lives.

If you haven’t encouraged your children to widen their paper correspondence, this is a perfect time of year to begin. After all, there are all those thank you notes to write.

How We Write Letters

I begin our letter writing sessions by bringing out a variety of notecards, stationery, pens, stickers and even colored pencils. My favorite resources for these things are The Roman Catholic Sacramentals Foundation, Target, my local dollar store and the local craft store. Sometimes the more artistic of the children will choose to use plain white computer paper and decorate it themselves (hence the colored pencils), but most of them appreciate the pre-made stationery, especially the paper with lines.

In any case, I like to encourage the children to doodle a bit or embellish their letters, just to make it even more personal.

These times are not meant to be “lessons” in that I don’t correct too, too much; rather, it is a time to foster their desire to share snippets of their lives with others and to allow a certain freedom of expression. This is not formal business writing but rather keeping in touch with Grandma or a godparent or an aunt.

On the table is the dictionary and thesaurus, and I am always available for consult. When the children are quite young, I will ask them to dictate the letter to me. I write it and they copy it. The very young are encouraged to draw a beautiful picture, and then Mommy will add some words for them.

So whom do we write to? Well, my dad lives down south, so he’s an easy choice, and he loves getting the letters (I’m told he bores his neighbors with them, kind southerners they are), but your letters do not have to be sent far away. Kelli enjoys writing to her godmother, who lives less than a mile from here. They’ve written to friends, authors and musicians whose work they enjoy, local and national politicians (no doodling on those letters), thank you notes for everything, relatives and so on.

When all the letters are completed, addressed and stamped, one of the children takes them to the mailbox and puts up the red flag signaling to the carrier that there is something to go. It warms my heart to see that little flag at attention, knowing that what is in it isn’t a payment or some other boring correspondence, but a little piece of my children’s lives off to lighten the day of the recipient.

It’s also a grand day when a return letter is received, which I think is the biggest benefit of all.