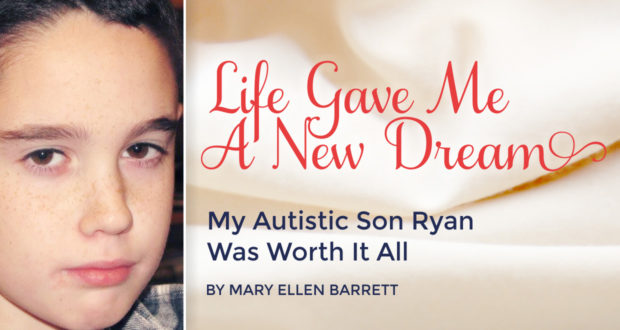 Life Gave Me A New Dream: My Autistic Son Ryan Was Worth It All

I have always had this dream of a perfect cottage garden. The carefully bedded out plants which are planted with an eye toward harmony and blending of color, shape and size. I would also love to have a perfect French potager right outside of my kitchen.

When I dreamed of having a family I had a similar kind of vision, and when my oldest son Ryan was born I pictured a smart, athletic kid who would read books, play games, have lots of friends and someday find a nice girl (of whom I approved!) and settle down to giving me beautiful grandchildren.

The reality of that was very different. Ryan was diagnosed with autism when he was three years old. I had an eighteen-month-old and was six months pregnant. My husband and I knew this diagnosis was coming but we were still heartsick at the official-ness of calling our son ‘disabled’.

The dream died a little that day but I have to say that after the mourning period it wasn’t that hard for us to look at the situation, see what was good and adjust the dream. We revived it rather than bury it and we surrendered to the plan that God had for our family. He made this leap of faith in trusting us with this extraordinary child and we had to believe that the Almighty had a plan and that we needed His help to accomplish it.

Our faith in God has been more than rewarded and Ryan grew to be a gifted and extraordinary person. A person we felt privileged to know, let alone be allowed to raise.

When Ryan was in third grade Dave and I became really dissatisfied with the way the public school was handling his needs. They had done a well enough job up until then and I was profoundly grateful that my school district was a model for the state in their ABA program.

ABA (Applied Behavior Analysis) is an educative method for changing the behavior of autistic people through a very structured environment, positive reinforcement, and working on skill building one-on-one with the teacher. This method really improved Ryan’s ability to sit still and pay attention as well as helping with some social skills, but mostly he was picking up on the abnormalities of the other children in the class and adding them to his own special set of weird behavior.

He was also starting to get picked on a bit and I was terrified for him going forward toward the dreaded middle school. (Cue doom music).

So here we are choosing homeschooling mostly because we wanted to properly socialize our autistic son and we were plagued with well-meaning people telling us that we needed experts for that, that an autistic child could not possibly be educated well by his parents when only surrounded by his siblings. He needed people who had trained for such things in order to turn out well.

A New Team of Experts

We didn’t have experts in the educative sense of the world but I am here to tell you that there is not greater expert in any child than his mother and father, than the people whom God chose time out of mind for this child and this child for them. He equips us to cultivate these wildflowers of ours and they bloom beautifully. Love can make up for any lack of training and when advice is needed or a new plan, God provides.

Our team of experts included six-year-old Katie, who spoke words long before her big brother and who diligently helped him learn his spelling words, helped him when he didn’t understand anything social and was passionate about him having friends and acting like the other boys. She helped him navigate social situations and he would go straight to her when he wanted to be “like a real boy” (his words, not mine).

Four-year-old Erin played trains with him and helped him build complicated structures and line things up in a way pleasing to his sense of order. She taught him turn taking and patience in the building and how to combat frustration. Her wise little four year old self calmed him in a way that no classroom could ever hope to.

Toddling one-year-old Kelli taught him responsibility. He was so concerned that she always be safe and happy. He assiduously brought her dolls and toys and was vigilant about closing doors and blocking the stairs. He could not have learned to care for a little one like that on a playground since the autistic children were not allowed near little ones.

Baby Kevin taught Ryan joy. I walked in the door for the first time with that baby and he whooped with happiness at finally having a brother. He confessed that he thought I was only having girls to drive him crazy and Kevin was in the house for about five minutes before he started to campaign for bunk beds. He was happier than I had ever seen him and he would do anything for his little brother, which came in pretty handy for this often overwhelmed mom.

The other expert in my arsenal was my Seton consultant. When we chose Seton as our homeschool curriculum it was in large part because of the Special Services Department which provided great support to me as both a teacher and a mom. Sharon spent hours on the phone with me carving out a curriculum that took into account Ryan’s deficiencies, what skills we needed to work on as well as the totality of my workload.

It was of such great comfort to me that I could call upon a consultant like Sharon and rely, not only on her expertise in curriculum, but also in her calm, cheerful demeanor to reassure me that I could in fact do this.

So those were our experts and Dave and I, nervous as we were, relied on them pretty heavily. It was a wonderful experience those first few months and along with his younger siblings, the wildflower in our garden flourished. Roots were set down and he bloomed.

Three more babies came to our family and each one widened Ryan’s capacity for change and his ability to give. He learned to love spontaneously and he gave of himself, often stretching way beyond his comfort zone. He made friends, real friends who invited to things.

His gift for music was encouraged and he found himself as a musician through church ministry, it was where he shined. It was where he was at his best and where I miss him the most.

Ryan was homeschooled for six years before God called him home and we, as a family are grateful for every moment we spent, every effort we made and for every trial we took on in keeping him home. It wasn’t all unicorns and rainbows, but it was worth everything we put into it.

When God blesses us with a child that is deemed by the world as imperfect, it is an amazing opportunity to grow closer to Him in love. Ryan was a living, breathing means to Heaven for our entire family and, in some ways, for our homeschool community.

He forced us to recognize that we are all made in His image and likeness. Our flaws and difficulties are not impediments to His love, but rather an invitation to love more.

The world needs these wildflowers we so tenderly cultivate in our garden. To homeschool them is to give them the best opportunity to be the people God intended them to be, to give witness to His great love and to proclaim the kingdom of God.