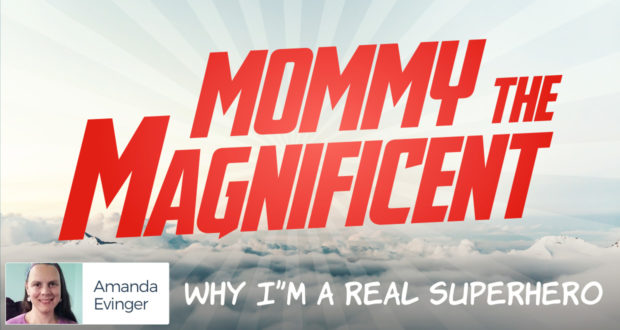 Mommy the Magnificent: Why I’m A Real Superhero

“Those who strive to be united to Christ truly sustain the world. And that union is not generally shown in external deeds that attract attention.” -Fr. Francis Fernandez, Conversations with God

One day, my six-year-old daughter Mariam and I were reminiscing about the profoundly joyful yet exhausting days that followed the birth of my baby, Marella. Marella had a serious case of GERD, which meant that she was awake much of the night, and during the day could only sleep upright in her carrier. Thus I carried her about six hours a day, every day, for several months, while I met the needs of my husband and two other little children, as well as homeschooling and working a necessary part-time job from home.

“How did we ever make it through that time, Mom?” Mariam asked me.

“Well, Mariam, I’ll tell it to you like it is. Moms are superheroes!”

She then said to me, agreeing wholeheartedly, “Yeah, they are like Saints that can fly all over the place!”

Me—Mommy the Magnificent, endowed with superpowers, not to mention a halo as brilliant as the ring around Saturn. Hmm. Me, a Saint from rural North Dakota who can “fly all over the place.”

Yep, that’s me. At least, according to my daughter.

As charming as our little conversation was, I have to admit, most days it is hard to tell that I am, apparently, Mommy the Magnificent. Many a morning I interrupt family prayer and forget to finish the rest of it, not to mention how I continually struggle with being Mrs. Impossibly Impatient.

Nevertheless, here and there, it does dawn on me that I’m a mom and it really is something great, regardless of my weak performance. Striving to be faithful to the sacred vocation of motherhood spells true, earthly and heavenly success. Sun up to sun down and all through the night, we moms are as superheros. How beautiful!

Our lives are just as important as that of Princess Diana and Queen Elizabeth, not to mention any other woman touted in historical textbooks. Each of our actions will impact the future of our children’s lives, and the stream of grandchildren which, ultimately, we helped bring into the world. Each choice we make will lift up the Church or take her down a notch.

Each expression we give will make its statement, for better or for worse. A smile from Mommy in the face of hardship can work a miracle, while whining grumbles can shatter peace of heart in an instant. As mothers, our potential to make a grand impact on the world is endless. If we embrace the heroic vocation we have been given, we will set the world on fire with Christ’s love.

Star of My Home

With all humility, I can say I am the star of my land (my home), and famous in the eyes of its people (my husband and children). If our family had a magazine, I’d be right on the front page, along with my wonderful husband, and God only knows how many great-grandchildren would read it.

When Bl. Mother Teresa said, “Love begins at home,” and “We cannot do great things on Earth, only small things with great love,” she meant it.

This phenomenal woman, who picked up over 60,000 dying people from the streets of Calcutta, thought that things such as changing diapers, working through English lessons diligently, shelling garden peas, making costumes for All Saints Day parties, getting the stubborn sticky stuff off from around Band-Aid marks, and spending a wild hour-and-a-half getting everyone ready for Christmas Eve Mass, are all, in the end, critical to making Catholicism come alive in today’s world. The kinds of seemingly plain things that we mothers do, day in and day out, take just that—great, magnanimous love.

There’s no way around it. What Moms do all day may be largely hidden, but it would be hideous to say that it is largely insignificant.

Pope St. John Paul II once said, “There is, for example, the immense multitude of souls who have spent the whole of their existence giving themselves for others in the anonymity of the home, the factory, the office… The day that everything is brought out into the public gaze when the Lord comes again, everyone will see the decisive role that the humble and inconspicuous have played, in spite of all appearances to the contrary, in the unrolling of the history of the world.”

Tomorrow morning, Mom, look in the spotty mirror, and shine. By God’s grace, you are a superhero. Oh, and while you are at it, you may want to take a moment and look down at your hands.

After all, as the saying goes, “The hand that rocks the cradle, rules the world.”

Born in Ann Arbor, Michigan, Amanda Evinger now lives in rural North Dakota with her husband Michael and their three young children. Together, they have two home businesses, keep a bountiful garden and care take St. Clement's Oratory. Amanda is passionate about being a Seton homeschooling Mom and dedicated homemaker. She also works from home as Senior Writer for Catholic Stewardship Consultants. Although raised Calvinist, she became Catholic in 2001, and then spent several years living with Blessed Mother Teresa's sisters and the Contemplative Sisters of St. John. She holds a Bachelor's Degree from Hope College in Spanish and Theology with minor studies in Creative Writing.
amanda amanda-evinger calcutta evinger mom superhero teresa 2015-07-27
Contributing Writers