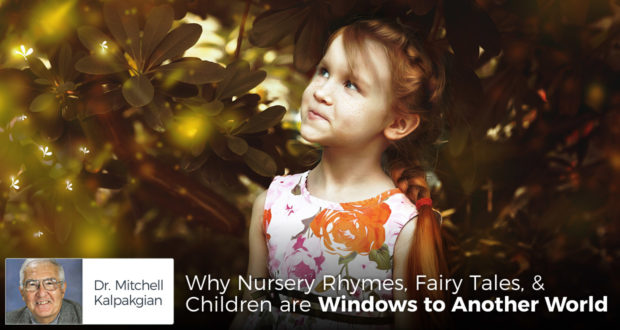 Why Nursery Rhymes, Fairy Tales, & Children are Windows to Another World

Dreams reflect reality in At the Back of the North Wind, and fairy tales are true to life.

In Diamond’s dream the playful stars in the sky invite the boy to join them in their mirthful laughter: “Come up; come up. We’re so jolly! Diamond! Diamond!”

As Diamond wonders how he will rise to the stars, the stars direct him to stairs which lead downward. When he descends to the bottom of the steps, little angels greet him with cries of “Now let us have fun” as they dig for stars as their recreation.

Every time they dig up a star, they peep through the star-hole and observe marvelous sights through the opening before putting the star back in its place. In his dream Diamond discovers the twinkling of the stars and sees in them the merry faces and bright eyes of jocund angels laughing, dancing, and jumping as they revel in the happiness of their play.

In this dream, Diamond learns “what kind of nonsense the angels sing when they are merry.” The truth which this dream reveals is that nonsense, the love of play and the pure enjoyment of fun, are divine in origin. Laughter originates in heaven, and Diamond’s delight in singing rhymes to baby brother resembles the happiness of angels in eternity.

In fact, as the story later explains, the old meaning of the word silly is “a kind of angel–a very little one.” The cheer that Diamond brings into his home, the mirth which makes the baby smile and laugh, and the happiness Diamond brings into everyone’s life he touches is derived from heaven, from the back of the North Wind.

His dream is not “bosh” as Nan claims but a vision of the truth.

Fairy tales are revelations of the Truth.

In Mr. Raymond’s story entitled “Little Daylight” the beauty of a princess appears in full glory as the moon waxes, and then her loveliness suddenly fades as the moon wanes. Because of this bad spell that transforms the princess into a wrinkled, stooping eighty-year-old woman when the moon diminishes, no prince will dare to marry her.

However, one prince who sees her dancing in the night at the height of her beauty follows her everywhere, “incapable of thinking of anything but how beautiful she was.” In his search for Princess Daylight, he finds an old, dying woman lying on the ground in the dead of night.

Pitying the poor woman, he carries her in his arms and kisses her–a simple gesture of kindness that effects a magical change which transforms the decrepit lady into the beautiful princess: “You kissed me when I was an old woman: there! I’ll kiss you when I am a young princess,” murmured Daylight. “Is that the daylight coming?”

This fairy tale is not something ethereal and imaginary but realistic, a commentary on the poor life of the orphan named Nan. The orphan girl resembles Princess Daylight because she too is afflicted with a bad spell: Nan is a neglected child who lives in poverty with an alcoholic grandmother.

Her unfortunate situation mars the brightness of her childhood and spoils the beauty of her innocence. Like Princess Daylight she is a gem who loses her luster because of the misery surrounding her life.

However, just as the prince accidentally finds Princess Daylight dancing in the darkness, Diamond providentially discovers Nan in one of his adventures with the North Wind at night.

In her disbelief that Diamond was outdoors during the stormy night to befriend her, Nan hears Diamond’s simple explanation: “But I shouldn’t have been out so late if I hadn’t got down to help you”–Diamond performing the noble deed of the prince in the fairy tale.

Diamond’s kind friendship in Nan’s life is the equivalent of the prince’s kiss in the fairy tale. Diamond appeals to the generous gentleman, Mr. Raymond, to intervene in Nan’s life when Diamond finds her sick and neglected, “lying with closed eyes and a white suffering face on a heap of a little better than rags in a corner of the den.”

Instead of ignoring the plight of the old dying woman as someone beyond all help, the prince chivalrously takes her in his arms. Instead of forgetting the squalor of Nan’s life as something beyond repair, Diamond looks for the child in the slums of London and heroically rescues her from a fatal illness.

After finding herself in a clean bed in a hospital recovering from sickness and later working as a servant in Diamond’s household, Nan realizes dreams, fairy tales, and adventures with the North Wind are not “nonsense” but substance.

In her case a dream comes true, her life resembles a fairy tale, North Wind brings Diamond into her life.

When good comes out of evil, when the future no longer resembles the past, and when wonderful things happen to ordinary people, fairy tales illuminate the truth and reflect the mystery of stories as windows which open to the wonder of the North Wind, to the miracle of Divine Providence.

Why ‘Nonsense’ is a Very Good Thing

They are as inherently delightful as the rhymes that Diamond that sings to baby: “‘There, baby!’ said Diamond; ‘I’m so happy that I can sing only nonsense!'”

This nonsense, however, does not mean untruth but a higher truth, a sense of overwhelming happiness at the gift of life which spontaneously erupts in the “nonsense” of jokes, fun, laughter, and play.

Diamond asks his mother if the angels (“when they’re extra happy, you know”) ever sing nonsense and also asks her if nonsense is “a very good thing,” comparing it to “the pepper and salt that goes in the soup.”

Without Diamond’s sense of humor and playfulness with his baby brother and sister, the home of his parents would be drab, bland, and flat. Without Diamond’s stories and dreams about the North Wind, Nan would never have a life of the imagination or transcend her dreary existence devoid of kindness, friendship, and hope.

Diamond’s nonsense is the seasoning and spice that flavors the soup, the fun-loving spirit which infuses the world with a lightheartedness that lifts the gloom, gravity, and deadly seriousness of life which will not tolerate any “nonsense,” that is, has never been at the back of the North Wind or has any idea of the God of play or the singing of the angels.

The God who created gurgling rivers, laughing babies, and singing angels is also the God who invented nonsense, the God of mystery whose wonders do not always make perfect rational sense but require childlike belief.

The art of living requires the salt and spice, the silliness and nonsense, the mirth and laughter of the spirit of play that carries man into a higher world just as the North Wind carries Diamond at night in his sleep to the stars and introduces him to the angels who sing, play, and revel in a heavenly land of mirth where children have their beginning and dreams come true:

Where did you come from, baby dear?
Out of the everywhere into here.

Where did you get your eyes so blue?
Some of the starry spikes fell through.

What makes the light in them sparkle and spin?
Some of the starry spikes left in.

But how did you come to us, you dear?
God thought about you, and so I am here.