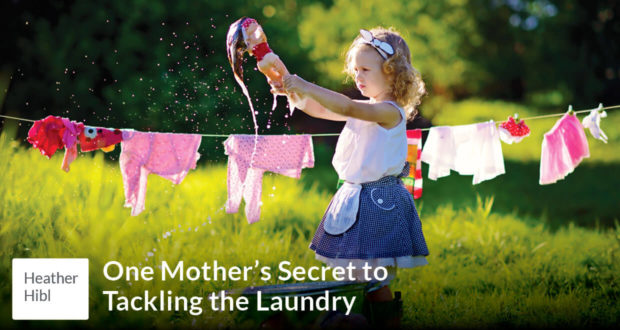 One Mother’s Secret to Tackling the Laundry

Behold, Heather Hibl has found a special place in her home that’s orderly and peaceful, smells of Dreft and Downy and has saved her from a life of drudgery.

I believe that no matter how many children reside in a home, beautiful, clean, organized laundry is achievable so long as four things are regularly done.

You have to wash it. You have to dry it. And—I apologize for saying this — you have to fold it and put it away.

“Away,” in my home, is our family closet which my kids have named “the dressing room.” Conveniently located right off the laundry room, it has saved me from a life of drudgery and my husband from any more of my long-winded rantings where I sob that I will die if I have to face another day sorting out mountains of clothes.

Over the years, I have discovered that the whole business of “doing the laundry” isn’t that bad—until you get to the end. I mean, really, it’s easy enough to go rushing through the house sweeping denim jeans out from under beds and damp towels from off the bathroom floor.

It’s easy enough to unroll muddy soccer socks and drop them in the churning water, provided you don’t breathe through your nose. It’s easy enough to draw warm clothes from the dryer and stack them flat in the laundry basket so they won’t be too wrinkly when you finally get to them.

But what is not easy, and what makes me crazy, is when I turn around at the end of the day and see towers of clean, sweet-smelling laundry all needing to be folded before somebody goes rummaging through them looking for a beloved t-shirt, leaving everything else scattered in a mess upon the floor.

Having eight kids, I have found that accumulating massive amounts of laundry is just unavoidable. But for me, the dressing room has really served to minimize much of the disorder and frustration that often comes with that because, now, everyone’s clothes belong in the same room. All of them.

And because they’re all in one room, folding and putting away has become absolutely manageable.

I have the room set up so that out-of-season items are stored on the highest shelves and arranged by size and gender. This way, I can quickly determine what I have and what I will need in coming months. On the lower shelves are clothes being currently used. The right side of the room holds girls clothes and the left side holds boys.

Each child has a shelf where they can easily reach their own clothes. We don’t use drawers. Drawers are evil. You can’t see what’s in them. You just keep washing the things that are on top and everything else gets messily forgotten.

We have shelves. Shelves are God’s gift to mothers. The cabinets beneath the shelves are for dress shoes and boots, socks and underwear, and surplus diapers. Hanging clothes go on either side of the dressing room door—the right side is winter, the left side is summer. We have two window seats. One is for boys pajamas and the other is for girls.

Along my irksome journey toward tidiness, I have learned some useful things which I would like to share. One thing, for example, is that it’s a waste of time to fold pajamas. Don’t fold socks or underwear either—but do throw them in clear plastic bins so they can be easily gotten and easily put away. Do pull clothes hot from the drier, if you can, and lay them flat for folding later on. Don’t iron unless you are going to a wedding or a funeral.

Also, don’t save socks with holes, pants with holes, underwear with holes, shirts with holes, and ugly belts. Don’t! Don’t save that dress you hate but nothing’s wrong with it. Don’t save your husband’s shirt/tie/sweater that you bought him but he never touches. He won’t wear it. He doesn’t like it. He likes you—if you don’t make him wear it. Finally, don’t save any scraps from old clothing for that “amazing” quilt you’re going to sew someday.

Unless. . .you are really going to sew it. If you don’t know how to quilt, stop fooling yourself and throw the scraps away. And yes, I am talking to myself.

Keeping it Under Control

Anyhow, moving on. At my house, the kids are expected to change clothes exclusively in the dressing room. There is a sign on the outside of the door which says boys on one side and girls on the other. They are allowed to change together by gender if they wish, but they must always be respectful of each other’s privacy.

Never have I ever been sitting on the couch quietly reading only to hear thunderous running through the house and slamming of the dressing room door followed by wild banging and shouts of “Hey! Let me in! I was going to get in there first!” Or maybe I have. But that’s not the point. The point is that, most of the time, it works really well.

And because the kids are only allowed to dress in that room, the tendency for mountains of laundry to collect everywhere is hugely diminished. Best of all, though, I can determine in a matter of a second or two whether or not the laundry situation is under control.

The dressing room is my favorite room in the house. It’s orderly and peaceful. It smells of Dreft and Downy. And when I go in, closing the door softly behind me, the insulation of all those clothes packed in against the walls nicely muffles the bustling noises of family life. It’s a lovely oasis!

I’m sometimes disappointed now when I find the hamper’s empty. 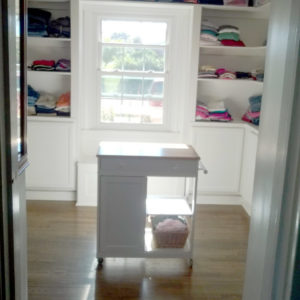 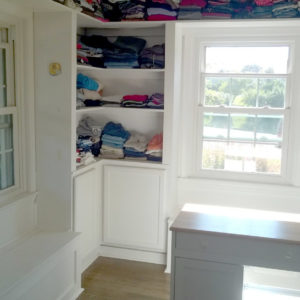 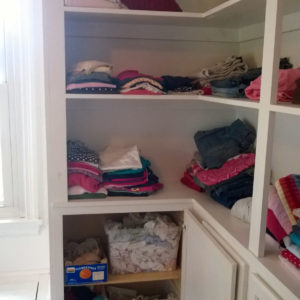 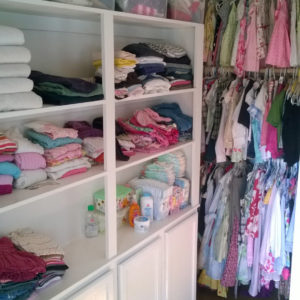 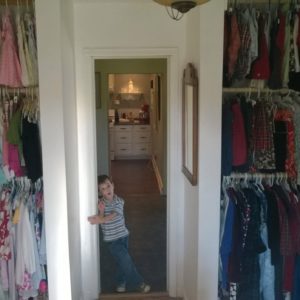 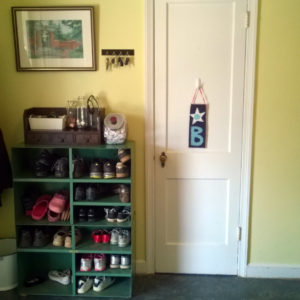 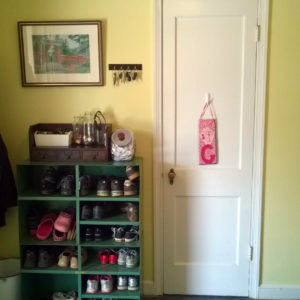