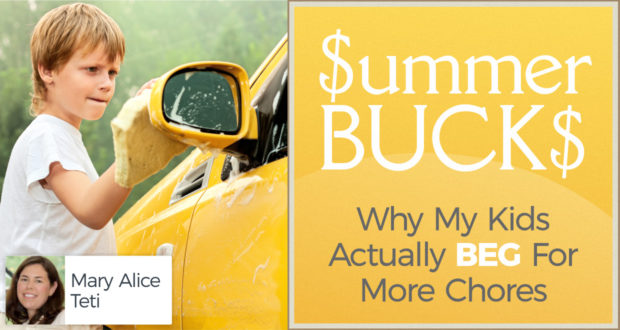 Summer Bucks: Why My Kids Actually Beg For More Chores

This summer, I am not buying anyone anything. My children moaned and groaned, till they learned they can earn money (through chores) to spend however they choose.

Lately, my children and I have had a bit of a naggy relationship. I am always asking them to do things, and they are always asking me for things, or money, or treats. I’ve noticed that our lack of a system is unfair and arbitrary, leaving all of us unsatisfied.

This all came to a boiling point at a recent trip to a minor league baseball park. Tired of saying no all the time, I decided to be a “yes” mom for a change, and I kept handing out $5 bills to whichever child asked for something, until I ran out of cash in my wallet.

It was only then that I realized that one daughter had not had any dinner while some others had eaten three or four treats. To the greediest (or most assertive?) go the spoils?  This made me see that this same daughter, who also tends to do the most around the house because of her naturally compliant temperament, has been right to say that she is getting short shrift.

I made a huge decision and announced it to my children: for the entire summer, I am not buying anyone anything. They already have the clothes and equipment they need for sports and camps, and they will be on their own for anything else.

There was moaning and groaning until I revealed the second part of the plan. My children will have many opportunities to earn money, which they can spend however they choose.

We are calling this program “Summer Bucks.”

To make it fun and keep track of the earnings, we printed out lots of play money and made a paper wallet for each child.

Then I made a big poster which listed some tasks which they could do to earn money. A task that usually takes about 20 minutes, like straightening up at night, earns $1.

A longer task, like mowing the lawn, earns $10. Empty the dishwasher and reload it; clean out the van; weed the front walk; do an extra page of math; bike to swim practice so that you don’t need a ride home; all of these helpful tasks are earning my children money this summer.

Paper bucks can be converted into real cash at any time, but I told them I would rather use paper than have a drawer full of real money sitting around all summer.

It has been really interesting to see how my children are choosing to spend their money. One daughter wanted a “diabolo” juggling toy which she had tried at a juggling event for children.  She researched and found that they cost about $35.  She worked and went without treats until she had enough, and as I write this she is happily practicing and learning to do cool tricks with her new toy.

This is something I never would have said yes to before, but it is super cool and money well spent for her. My young teen looked and felt so grown up, in a good way, when she bought her own iced tea while she and a friend were walking around a small town doing errands.

Another child has “gone in” with friends for an online computer service which allows them to play games together while far apart over the summer, each boy is paying $4 a month towards the $20 fee.

Recently, the Lego catalog came in the mail, and I noticed that even the 6 year old could understand that $199 is an awful lot of money for a toy. Making new things out of the Legos they already have is free!

The children seem to work in fits and starts depending on what spending goals they have, but it evens out, because someone is always willing to do the dishes for a buck. Rather than my asking them, they are begging for chores, and I keep coming up with new ideas of things that they can do to be helpful.

The program is not really costing me any money because they are earning and spending money that I might have spent on them here and there anyway.  In addition, I can have a slightly more leisurely summer, which is worth paying a little bit for, if there are children in the house who will gladly step up and wash the towels when we come back from the town pool.

Since we began this program, it is clear that the combination of responsibility and independence is changing my relationship with my children. I no longer dread walking past gift shops or hearing that “everyone” is going to the movies.

No one has said that they are bored, the kitchen is spontaneously cleaned during free time, and not once has a child stormed out of the room saying that something was “unfair!”

Mary Alice Teti is the mother of 7 children ages 2-12. She has been homeschooling for seven years and believes that structure leads to freedom and a calm homeschool environment. She has been using Seton materials to provide that basic structure and she loves the online, printable lesson plans. Her writing has appeared on Busted Halo, Mater et Magistra and the New York Times Motherlode blog. Mary Alice blogs about family life with 7 other Catholic Princeton University alumnae at www.buildingcathedrals.com