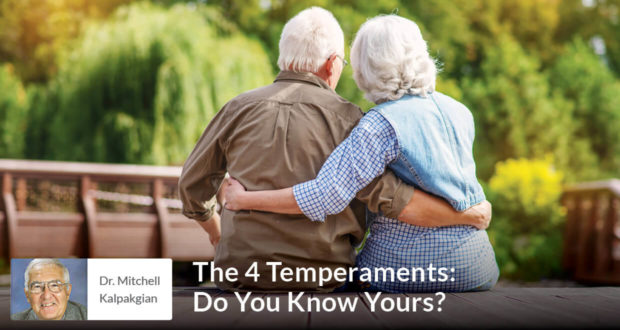 The 4 Temperaments: Do You Know Yours?

To be the best parent, student or spouse, whatever our vocation, Dr. Mitchell Kalpakgian advises that we must know and understand our God-given temperament.

Just as all people are born with brown eyes or blue eyes or dark hair or light hair, everyone also inherits from birth a particular temperament that gives individuality to a person.

In the classical and medieval world physicians referred to the four temperaments as the phlegmatic, melancholic, choleric, and sanguine that corresponded respectively to the four elements of earth, air, fire, and water.

The docile phlegmatic resembled the passive, immovable nature of the earth; the contemplative melancholic belonged to the air in the realm above; the irascible choleric shared the nature of fire; and the serene, unruffled sanguine mirrored the calmness of water.

No Best, No Worst

Imagine four containers that are filled unevenly, one as far as the 3 cup mark, another as far as 1 cup, the next at 2 ¾, and the last at 4. All human beings have the four temperaments in some degree but not in equal measure. One of them is dominant and gives persons certain inclinations and dispositions that define their nature and personality as natural, God-given traits.

To understand more about your temperament, The Temperament God Gave You is an excellent book from Sophia Press by Catholic counselors Art and Laraine Bennett.

No one temperament, however, is the best or the worst. Like God’s gifts that vary from person to person for the common good of the family or society, the temperaments also depict God’s wisdom in ordering the world with a multiplicity of talents for all the types of human work in the different professions and vocations.

A temperament is not a virtue or vice because it is inborn, and not chosen as an exercise of free will. Whether a person is essentially choleric (passionate, ardent), melancholic (reflective, introspective), sanguine (imperturbable), or phlegmatic (submissive, obedient) is not of ultimate importance, neither admirable nor blameworthy.

However, the fact that all persons are born with an inherent temperament that distinguishes their nature, individuates their emotional composition, and leans them in a particular direction provides valuable knowledge of human nature. It confers self-knowledge that affects human choices and leads to particular forms of interest and education.

A person must know and understand his own temperament, and no one should judge a person for acting naturally according to his God-given temperament that is inviolable.

Down to Brass Temperaments

All four temperaments are natural tendencies with the potential for good or evil. Like all passions or emotions, the temperaments demand self-mastery and self-possession.

For example, the choleric with the fire of passion and ardor have a natural disposition for leadership, but their commitment to great causes and righteous anger must beware of the sin of wrath.

The melancholic with their bent for speculative reflection possess the power of philosophy and contemplation, but they must safeguard against “thinking too precisely on the event” as Hamlet does, that is, thinking too much without acting.

The sanguine who show great equanimity and avoid the emotional extremes of the agony and the ecstasy must not settle into indifference and insensibility with no passion for good or hatred for evil.

The phlegmatic that obey the law, cooperate as loyal followers, and do their duty must be conscious of the temptation to sloth when no laws command them or leaders rally them to action.

Be Anything You Want?

As Dante shows in The Divine Comedy, those born with a choleric temperament most appropriate for military leadership and those endowed with a melancholic temperament most ideal for scholars and contemplatives are not interchangeable.

No person without the proper temperament should be coerced into a profession contrary to nature. No student considering a career can become “anything he wants to be” as young students are often told as if sheer will power suffices without taking account of temperament. The limitations of temperament pose obstacles just as lack of knowledge or experience disqualifies persons from certain careers.

Complementarity in marriages involves the mixture or balance of different temperaments for the happiness and harmony of the family. Two choleric parents will argue constantly and rob a home of its peaceful contentment. Two melancholic parents will neglect the practicalities of daily living and not give vigilant attention to all the details of domestic life.

Two sanguine parents will rest content with the status quo and not motivate each other to grow, improve, or rise above the average. Two phlegmatic parents will never initiate or assume any leadership to organize an event, have a party, or accomplish a household project.

God in his infinite wisdom varies the temperaments of man and woman in marriage for the good of each other and for the happiness of the home.

Many works of literature provide sharp definition of these temperaments. The choler of Achilles that inspires his valiant leadership in battle in the Iliad loses its virtue when it turns to wrath, hatred, and revenge in his quarrel with Agamemnon, when the king demands Achilles’ prize.

The melancholy of Hamlet that grieves over the death of his father and ponders the meaning of life and death in the “To or not to be” soliloquy loses its virtue when his sadness tempts him to despair and suicide.

The sanguine Mr. Micawber in Dickens’ David Copperfield always appears optimistic and hopeful that “something will turn up” to provide the livelihood he needs to care for his family and escape debtors’ prison, but his composure loses its virtue when he waits passively and naively expects that good fortune arrive with no effort on his part.

The phlegmatic Bartleby, the scrivener in Melville’s short story, copies documents painstakingly without complaint and obediently performs his duty but loses the virtue of his temperament when he does work with perfunctory motion and mindless routine.

The four temperaments, then, transmit to persons a nature that can excel and develop into a distinct virtue or decline and form a predominant flaw. A temperament is not a fixed, static quality but a potentiality capable of the best or worst in a person.

The four temperaments dispose persons to be faithful to their nature and to perceive reality with a perspective or coloring that makes the truth balanced rather than one-sided, more blended rather than all black or all white or all red.

Like the colors of the rainbow that combine to form the radiance of beauty, the four temperaments blend to make the subject of human nature a book of wonder.