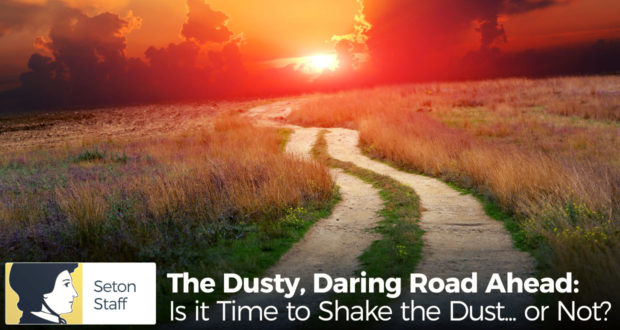 The Dusty, Daring Road Ahead: Is it Time to Shake the Dust… or Not?

If anyone will not welcome you or listen to your words, leave that home or town and shake the dust off your feet. – Matthew 10:14

It’s difficult these days, no doubt. It’s difficult to maintain hope in the future when Western Civilization has not only abandoned Christianity but also has seemingly abandoned any tenuous connections it once had even to mere sanity. It’s not enough anymore to tell us that the threadbare emperor is really wearing a beautiful suit of clothing; now we are told that the Constitution requires us to affirm the beauty of the emperor’s vesture. It’s difficult these days, no doubt.

It’s easy these days, no doubt, to shake the dust from our feet and say good riddance. “You want a society in which bad is good and good is bad, where up is down and down is up, where we talk about protecting children while destroying them, where the greatest expression of tolerance is intolerance and actual tolerance is forbidden? You want it. You got it!”

But, in reality, if ever there is a time for shaking the dust off feet, this is not it.

There is a saying in politics that you don’t want your enemies to define you. If Christians withdraw from society, as it is all too tempting to do, we will only be worse off because our detractors will then have an unanswered opportunity to define us as they want.

Better that we define ourselves.

They say Christians believe what they believe because of hatred. As if we could harbor hatred within our hearts and still dare to call upon the mercy of God. We speak the truth out of love. Indeed, truth and love are really the same thing—love is simply truth in action.

And what we need is more action, because you can’t achieve what you don’t dare.

Action 1: Make sure you and your children know and understand the Catholic Faith.

If you want to understand a problem, go back to the beginning. In the case of the modern misunderstanding of marriage and family, the beginning is Humanae Vitae. The world finds itself in its current state because it rejected the prophetic message of Pope Paul VI in 1968. He warned of the evils which would come from separating the procreative and unitive aspects of married love. If only the world had listened.

It’s not enough merely to teach our physical families. The family which is our church community must be taught as well, and that requires trained and committed catechists. In some cases, where the Faith is not well-known or is disregarded, this may be like becoming a missionary to a foreign land. Even so, the Faith, once planted, can grow 30, or 50, or 100-fold.

Besides teaching, simply knowing and acting together as a faith community is important. Does the surrounding, non-Catholic community know that your church exists? It should, because if they don’t know you then they are more likely to believe it when someone says that the Catholics are haters and bigots.

And if they do know you—from your good works, from your charitable endeavors, from your care for the poor, from your help of the aged—then when falsehoods are spread about you, there will be no ears to be tickled and no tongues to repeat the charges.

Do you know your neighbors? Could you count on them in case of trouble? Would they vouch for your character? Isolated people are vulnerable people. All Catholics, but especially homeschoolers, need to know and be known in the community. You should know who your local town and county representatives are, and let them know about your views. Are there needs in your community? Volunteer, and have your kids volunteer.

Most communities have many fraternal and other clubs. If you own a business, join the Chamber of Commerce. If you have an interest in politics, join a local town or county committee. Join the local Toastmasters Club so you can learn how to stand up in front of an audience and speak concisely and coherently.

Especially if you are young, run for public office. It’s actually not that difficult to run a campaign for a local Town Council or County Board of Supervisors. You don’t need much money; all you need is energy and time. In Front Royal, Virginia, last year, a young gentleman and a young lady (both under 30) ran for Town Council on shoe-string budgets. They both won.

Even though you don’t want to withdraw from the world, you don’t want it to overcome you either. If you move to a more Catholic community, then your family can meet other Catholic families and your children can have Catholic friends, and perhaps someday marry a Catholic.

The option to withdraw from society is sometimes called the Benedict option, after St. Benedict, the founder of Western Monasticism. Writing in Crisis Magazine, Austin Ruse suggests what he terms the Escriva option: engaging with the world, but from a home base of orthodoxy.

He writes, “Though we would never use such a phrase, my family and I live in … an ‘intentional community’ in Northern Virginia where a grade school in a Church has brought dozens of mission oriented families together. Many in the grade school go on to the local Catholic high schools—Oakcrest for the girls and The Heights for the boys.

“Others have come to this area for the vibrant home-school community. Many live a little farther out, gathered in Front Royal, Virginia, around Christendom College and the various Catholic apostolates headquartered there. Some of these families have begun to intermarry. All of them are fully engaged in the culture: banking, politics, teaching, journalism, medicine, even the movie business. They gather strength from each other and wade into the culture with the Gospel example of their lives.”

It’s not just Front Royal, or the Northern Virginia area. Steubenville, Ohio is also a strongly Catholic community, as is Ave Maria, Florida. And there are others around the country. Search them out.

If you can’t move, then at least don’t be isolated. Seek out other families who are similar-minded, and confirm each other in the Faith.

However difficult the landscape appears when we gaze out through the windows of our domestic church, the world is hardly worse now than that into which Christ was born. Did the sorry state of the world stop those early Christians from living life, performing their work, and preaching the Faith amidst a faithless people?

Christians conquered the world once; not with arms, not with imprecations, not with fear, not with trembling, but with steadfast love. Do we dare to do so again?