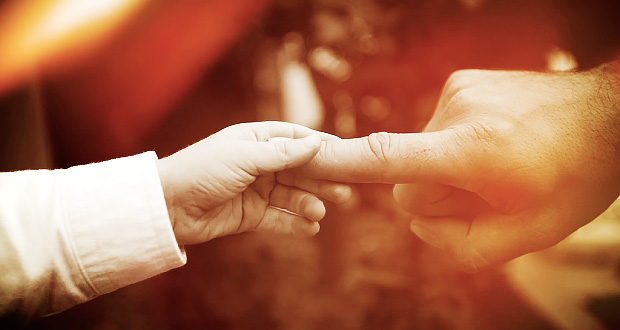 The Human Touch: What King Midas Didn’t Get

In Hawthorne’s A Wonder Book one of the children who hears of the famous story about King Midas, remarks, “But some people have what we may call ‘The Leaden Touch,’ and make everything dull and heavy that they lay their fingers upon.”

The Human Touch assumes many forms, often in the form of birthday cards, happy anniversary wishes, thank you notes, and personal letters that express congratulations, gratitude, sympathy, or friendship. The Human Touch appears in the kindness extended to strangers or visitors welcomed with hospitality.

In Hawthorne’s story “The Miraculous Pitcher” from A Wonder Book, Baucis and Philemon, an elderly couple, never fail to extend the Human Touch and host guests as if they were Greek gods in disguise. They entertain visitors because “human beings owe a debt of love to one another, because there is no other method of paying the debt of love and care which all of us owe to Providence.”

The Human Touch appears even in the midst of war, and it is sensitive to the bonds that unite families. In the midst of fierce battle scenes in the Iliad a Greek and a Trojan, learning that their families cherished a bond of friendship over several generations, renounce the idea of fighting each other and part with a truce.

The Human Touch allows for exceptions and takes into consideration the particular circumstances of a person’s situation or health. In Robert Frost’s “The Death of the Hired Man,” Warren gives Silas, the unreliable hired man who always leaves in the busiest time of the harvest, an ultimatum never to come to the farm again. But when Mary, Warren’s wife, observes “he has come home to die,” Warren forgives and overlooks all of Silas’s broken promises. The Human Touch supersedes ill feelings between employer and employee.

The Human Touch greets people, always initiates conversation, makes a person feel at home, and takes an interest in another person’s family, history, or ethnicity. This Human Touch distinguishes Blessed Cardinal Newman’s ideal of the gentleman, a person who always adds the personal dimension: “his great concern being to make everyone at their ease and at home.”

The Human Touch always expresses gratitude and often calls, visits, or writes after a social event or invitation to acknowledge indebtedness to the host for all the effort and preparation that created the delightful time for all. The Human Touch, in Dr. Johnson’s famous words, keeps friendships “in repair” by regular visits and correspondence. The Human Touch never neglects to offer compliments.

A personal, hand-written letter is a special mark of The Human Touch.

In O. Henry’s story “The Last Leaf” Johnsy, a young woman artist living in an apartment in Greenwich Village, suffers from pneumonia and grows weaker with each day. A doctor evaluates her condition: “She has one chance in—let us say, ten … And that chance is for her to want to live.” In other words, she needs the medicine of The Human Touch. However, Johnsy looks out the window and counts the leaves as they drop as she compares their falling with her own declining health. Without some special Human Touch the world looks as bleak and dreary as the weather outside the window.

In her mind she too will die when the last leaf disappears from the tree outside her window: “That leaves just four. I want to see the last one fall before it gets dark. Then I’ll go too.” When Johnsy’s roommate Sue tells Old Behrman, a fellow artist living in the same building, of the patient’s slow death and mentions the way Johnsy identifies with the falling leaves, he responds in his Germanic accent, “Is dere people in de world mit der foolishness to die because leafs drop from a confounded vine?” Medicine alone cannot cure Johnsy’s condition whose healing depends on the will to live and the power of the personal touch.

As Johnsy lies in bed counting the remaining leaves outside her window, all have fallen except one. Day after day that one last leaf clings to its vine and seems impervious to the wind and rain outside, and Johnsy lingers on in her battle with pneumonia, a struggle that finally ends because the last leaf never falls: “Something has made that last leaf stay there to show me how wicked I was. It is a sin to want to die.”

The doctor who visits the patient now declares that her chances for recovery are one in two instead of one in ten, and the following day he announces, “She’s out of danger.” Although neither Johnsy nor the doctor understand the mystery of the sudden cure, the miraculous medicine takes the form of the kindness of The Human Touch.

The doctor who has been has examining Johnsy has also been treating another patient for pneumonia, old Behrman, who dies after catching a cold on a freezing stormy night, his clothes and shoes drenched. Old Behrman had been on a ladder near Johnsy’s apartment where he painted a leaf on the window just before the last leaf on the vine fell.

As Sue observes to Johnsy, “Didn’t you wonder why it never fluttered or moved when the wind blew? Ah, darling, it’s Behrman’s masterpiece.” Old Behrman epitomizes the Human Touch: the thoughtful gesture, the kind deed, the special effort, and the generosity that does not count the cost. The Human Touch too is a “masterpiece,” a great example of the goodness of the heart.

The Human Touch is a little thing that has a profound effect, a small deed that carries extraordinary power.

The art of living is to use The Human Touch in all one’s relationships and make life as personal and gracious as possible for all people with whom one comes in contact.