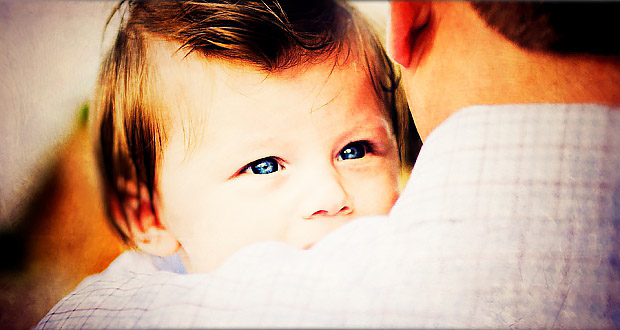 The Importance of Fathers in our Search for God

Excerpts of an address delivered May 1, 1999, to the pastoral workers of the Diocese of Cheyenne by Most Rev. Charles Chaput, O.F.M. Cap., Archbishop of Denver

These have been a tough couple of decades for fathers in particular, and men in general.

[People] attack men’s identity and undermine the whole idea of fatherhood. In the process, women and children are hurt, families are damaged, and our understanding of God Himself becomes confused. Let me outline three criticisms, or problems, which make our times especially hard for fathers.

The first problem is with Dad’s genes. … And it’s described best in a 1996 book called Demonic Males: Apes and the Origins of Human Violence. … As you’d expect, the authors have a pretty hostile view of the traditional family and marriage, which they see as a trap for women cooked up by patriarchal power.

Dad’s second big problem is economic. Children now watch 5,000 hours of televison before they enter kindergarten and 16,000 hours before they graduate from high school. The average American sees 1,000 commercials a week, and 1 million before he or she is 20. And what commercials teach is this: The best things in life are not free; in fact, they cost quite a bit of money . . . but we should get them anyway, because otherwise, we won’t be happy.

Consumer capitalism encourages appetites; which require spending; which encourages debt; which demands more work to earn more money; which gets spent on bigger appetites; and so on. That’s its nature. The result, in many families, is the elevation of money as the only real measure of value. Which implies that if you don’t get paid for your labor — and obviously, stay at home mothers don’t get paid — your work is somehow inferior. Which helps drive more and more women into the workforce.

My point is this. Our economy has changed. Many men don’t play the same, clear, solitary provider role for their families they once did in the past. At the same time, family members are taught by the mass media to see themselves as self-contained consumers. So the internal economic life of the family has also changed — from a common purpose shared by all family members, to a collection of competing individual interests. In other words, Dad’s muscle work isn’t as valuable as it used to be. And even a good male “brainworker” can rarely keep up with the costs of consumerist family life.

Real feminism resists abortion and is naturally prolife. But a certain kind of modern feminism is not just pro-woman, but anti-male. In the words of one feminist scholar, “Socialist feminists see [the traditional] family structure as a cornerstone of women’s oppression: it enforces women’s dependence on men, it enforces heterosexuality and it imposes the prevailing masculine and feminine character structure on the next generation.”

The biggest delusion of the 1960s, ’70s and ’80s was that women and children could survive and even prosper without husbands and fathers; that divorce could be a good thing with little or no impact on the children involved. Just the opposite is true.

The evidence is clear. The breakdown of intact, two-parent families severely damages children. Worse, as single-parent and step-parent households increase, our social fabric weakens. There’s no mystery to the data: Children need fathers, and we all suffer if fathers disappear. Which is why David Blankenhorn, the author of Fatherless America, can say that “fatherlessness is the most harmful demographic trend of this generation. It is the leading cause of declining child well-being in our society. It is also the engine driving our most urgent social problems from crime to adolescent pregnancy to child sexual abuse to domestic violence against women.”

Author Robert Samuelson puts it another way: “The only solution [to our contemporary problems] is to reconstruct, somehow, families that provide the love, sense of self-worth and discipline that children require to develop into responsible, self-sufficient adults. But no one really knows how to do this… “ Of course, that’s not quite true. I think the solution exists, and we can find it in our faith.

There’s an old saying that the greatest gift a father can give his children is to love their mother. That’s the importance of a father: the witness he gives through his love. I have many memories of my own father. But above all, I remember and cherish his love for my mother. I always believed in it, because it was always there. My father taught me that fidelity was not just possible, but a source of joy and freedom, satisfaction and friendship. I might have learned that without him, but not in the same way, and not with the same intimacy. He also taught me how to choose to love. Fathers choose to love and choose to remain with their children in a way mothers do not, because mother-love is frankly just more intense, more natural, more organic. Nothing in fatherhood is as automatic, or as biologically directed, as motherhood. Real father-love is entirely a free-will act of self-sacrifice. Lived well, it gives us a window on God’s own fatherhood.

Of course, it’s misleading to draw too many parallels between the fatherhood of God and human fathers. God is wholly other, and neither male nor female. But Scripture says, “I bow my knees before the Father, from whom every family in heaven and on earth is named” (Eph 3:14,15). And Jesus Himself told us to call God “Father.” It’s the language God chooses to reveal Himself, and it’s through a human father that the child best learns how to integrate justice and mercy; how to engage with the world; our purpose beyond the family; the nobility of strength when it’s ruled by love; and the creative fruitfulness of work. A father’s love completes the family — and in that communion of persons, the child gets the first inkling of who God is, a Trinity of persons in a community of love… like the family.

Looking out from within the love of a family, we can see the poverty of so much of today’s culture. If men are simply predators and inseminators looking to spread their seed, and if women really need men only as a way of getting children, well… then marriage is just a contract of mutual utility, with the sexes using each other as a means to an end. But people are better than that. Our motives and yearnings are higher than that.

So we come to a final question: What do we do to restore fathers to their place in the family and in the culture, and through that, to renew our language of God?

We live in a curious time. We lionize books like Tom Brokaw’s The Greatest Generation. We revere the values which the generation of the 1940s embodied — especially the fathers and brothers and sons who fought in World War II. But how much of it, I wonder, is just our nostalgia for a life we have no intention of choosing . . . because it would demand the hard work of conversion. You see, that’s the heart of the matter. The revolution starts in the individual soul. When men and women decide to live scriptural lives, sacramental lives, then and only then, will the world begin to change.

It sounds pious and impractical, but it was impractical for the first Christians to oppose the Roman Empire. It was impractical to abolish slavery. Societies change when families change. Families change when individuals change. Turn off the television. Buy less. It sounds easy — but try it. Spend time with your kids. Keep Sunday holy. Pray together. Choose to be faithful. Spouses, choose to subordinate yourselves to each other. Husbands and fathers: Be the leaders you were meant to be. Claim it, and it will be yours. Goodness is magnetic.

Preparing these remarks, I noticed that I’d be speaking with you on the Feast of St. Joseph the Worker. This is one of my favorite feast days, because Joseph was a man’s man — a man accustomed to labor, sweat and the burden of supporting a family. Scripture says, “Unless the Lord builds the house, those who build it labor in vain” (Ps 127:1). It’s always struck me that God the Father put His only Son into the care of a carpenter, a builder. And Joseph, in his faith and obedience, allowed God to use his own human talents to build the Living Tabernacle. Joseph protected and taught, formed and provided for, the Redeemer of the world.

Joseph was a living witness of the meaning of manliness; the nobility of human labor; and the dignity of married love. Surely, Jesus must have admired and loved him with all his heart. So if we hope to restore the identity of fathers in our families and in our culture, if we hope to rebuild the integrity of family life in our communities . . . we should look first to Joseph.

We have no better model.

The Archbishop’s full remarks are available at the website of the Archdiocese of Denver at www.archden.org

Charles Joseph Chaput, O.F.M. Cap. is an American prelate of the Catholic Church. He is the ninth and current Archbishop of Philadelphia, installed on September 8, 2011. He previously served as Archbishop of Denver and Bishop of Rapid City.