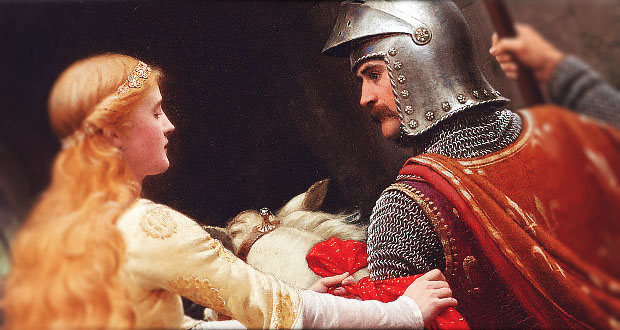 The Secret Ingredient to Bliss: A Story from King Arthur’s Round Table

Every human being experiences the conflict between duty and pleasure, what a person wishes to do for enjoyment and what a person ought to do by way of obligation.

These two tendencies often appear as contrary, irreconcilable powers that inevitably clash and produce resentment or frustration. To seek pleasure as the first priority provides delight but sometimes elicits guilt. To place duty above pleasure gives peace to the conscience but may produce a sense of deprivation or impoverishment.

A famous episode from Howard Pyle’s The Merry Adventures of Robin Hood, “The Wooing of Sir Keith,” captures the mystery of the relationship between enjoyment and obligation.

While King Arthur and his gallant knights gather at the Round Table, an old hag comes to the court to beg a special favor from a noble, chivalrous knight.

Bewitched by an evil spell, she suffers from “a foul disease” that has only one cure. She pleads, “There is no rest, nor ease for me/ North, east, or west, or south,/ Till Christian knight will willingly/ Thrice kiss me on the mouth.” This knight cannot be a married man, and he must not be commanded or constrained against his wishes to grant this boon.

Some of the most renowned men of the Round Table will not deign to honor the old woman’s petition and grant the favor of the kisses. They offer feeble excuses. Sir Lancelot regards the request as an insult to his pride. Sir Tristram pleads revulsion, protesting “For n’er can I my stomach bring/ To do it willingly.”

Sir Kay thinks it will damage his reputation with the other fair ladies and asks, “What noble dame would kiss a knight/ That kissed so foul a mouth?” And Sir Gawaine and Sir Geraint absolutely refuse, stating “I cannot, king,” and “For sooner would I die.” These men ignore the duties of knighthood to serve women because they find it loathesome to kiss a crone with a crooked nose, a beard on her chin, and bleary eyes.

Sir Keith, however, remains true to the knightly vows he professed. Without excuse, protest, or revulsion he kisses the old hag three times on the lips to rid her of pain and grief. Thereupon her old age dissolves and she blossoms into a young maiden. Her cheeks become rosy, her eyes sparkle, her hair gleams like gold, her voice sounds melodious, and “Her filthy rags, so foul and old, /Were changed to robes of silk.”

She offers Sir Keith not only the pleasure of her beauty but also the gift of her love and the treasure of her possessions, pledging “I give myself to thee.” Touched by the noble chivalry of a true knight faithful to his duty who treated her as a lady rather than a hag, the old woman’s grateful heart abounds with outpouring love for the hero who has won her heart by his chivalry and honor: “For never knight hath lady shown/ Such noble courtesy.”

Sir Keith’s sense of duty was not ruled by the ugly appearance or foul disease of the old woman but by the moral code of the Round Table. Although he expected no pleasure from the kisses, he is amazed that his honest fulfillment of duty has transformed a kind deed into rapturous delight. For performing his simple duty as knight without consideration for pleasure, reward, or recognition, Sir Keith receives beauty, love, marriage, and wealth.

One of Robin Hood’s men sees the mysterious relationship between duty and pleasure that escaped all the ignoble knights who shunned the hag: “That a duty which seemeth to us sometimes ugly and harsh, when we kiss it fairly upon the mouth, so to speak, is no such foul thing after all.”

The Hidden Magic of Duty

Even though the obligations of duty often appear grim chores to be endured rather than labors of love, they exert a charm or magic and have a powerful, underestimated effect. When performed with kindness, humility, and service, duty mysteriously becomes pleasure just as the old woman changes into the fair maiden. When duty and pleasure complement rather than oppose each another, then the knighthood of a man and the beauty and love of a woman come to life.

The deeds of the dutiful person influenced by conscience rather than by pleasure inspire surprises. Those who keep their word and honor vows because it is noble rather than easy stir the heart to respond with gratitude and generosity. Sir Keith melts the heart of the lady, and the glory of a woman’s loveliness blooms. Only when a knightly man kisses duty upon the mouth–without complaint or excuse—does an obligation assume a form of beauty and become a source of surprise.

The art of living, then, never opposes duty and pleasure as contraries. It never seeks an escape from humble deeds or avoids lowly work. Duty does not have to be drudgery devoid of all enjoyment, and play does not have to oppose work.

The simple performance of an ordinary duty in the most unspectacular way can amaze and have unimagined consequences as Sir Keith learned from his humble deed to the plainest and most unattractive of women who needed a knight to awaken her femininity and release all her love.

One should never underestimate the profound, unforeseen consequences of doing one’s duty with perfect humility.