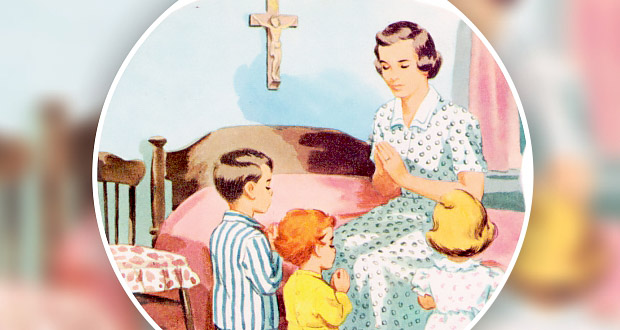 Why Reading and Rosaries Saves Souls… Especially My Kids!

For a while, after the dinner dishes were done, my family would gather around the dining room table, pray the Rosary, and then go into the family room, where I would read aloud a chapter a night from a book about one of the saints.

After some time, however, I began to slack off, especially from the reading, because I fell for a common trap set by hell for parents and convinced myself that my children were not absorbing anything that I was reading, so why continue? Why not wait until they were ready to absorb?

If you were to ask me what one of my greatest weaknesses is, I would have to say it is impatience. I have always struggled with this. If I buy a supplement or herb that’s supposed to achieve such and such, and such and such doesn’t happen within 24 hours, I place the bottle aside and rebuke myself for “being had.” If I ask a family member to do something for me, and they don’t instantly drop what they’re doing in order to do it, I do it myself.

Unfortunately, this tendency toward impatience would rear its ugly head whenever I would plant seeds into the hearts of my children. If I read something to them from the Bible, the Catechism of the Catholic Church, or from the saints, I immediately expected them to hit their knees, cry out to God in repentance, and be converted.

If my children appeared to be disinterested or bored as I read, this, too, was used by the enemy to convince me to lay aside the book and wait for better days.

All of this changed, however, when I read a book on the life of St. Teresa of Avila during my personal reading time. I write about St. Teresa a lot in my articles because she is my favorite saint. I have experienced more “aha!” moments through her writings than I have at the feet of any other saint.

Before the Lord touched St. Teresa’s heart, she had a penchant for silly romance novels. Her father did not approve of her reading these kinds of books, so she had to hide them from him. She readily admits that she spent many hours day and night reading these kinds of books. Her passion for reading romance novels got to be so extreme that if she didn’t have a new book, she didn’t think she could be happy.

St. Teresa also became fully preoccupied with wearing beautiful clothes, buying the right perfume, giving pleasure to others by looking attractive, and obsessing over the care of her hands and hair.

When she was eighteen years old, Teresa and her father decided to take a trip to visit her older sister, Maria, who was married and whom they hadn’t seen for many months. On the way, they would pay a visit to the brother of Teresa’s father. The uncle was so delighted to see them that he insisted that they stay with him for the next several days.

Teresa’s uncle spent a great deal of time reading, for he had a library full of good books. One day, he asked Teresa to read one of his books aloud to him. Hoping that the book would be one of chivalry or romance, Teresa excitedly flipped open the book, but was quickly disappointed to find staring back at her nothing but what she calls a “dusty, pious piece of Renaissance rhetoric, which she found very dull.”

To her utter dismay, she quickly discovered that all of her uncle’s books were of a religious nature. Every religious book that she read to him one after another bored her to the verge of exasperation. Out of politeness, as she read aloud to her uncle, she pretended that she enjoyed the pages of repetitious religious verbiage.

To her surprise, however, she found that she became affected by this religious reading in a way that she had not anticipated. For although there were none of the breath-taking, hair-raising moments of the novels that she used to read, Teresa found that the religious tomes her uncle enjoyed having her read aloud to him each night had a quiet something to offer, if one gave them a chance. Teresa eventually found herself yielding to a sense of peace and security that reminded her of childhood hours when she had liked nothing better than to hear of God and the wonderful things He had accomplished, not only in nature, but in the souls of men.

Long story short….this “boring” and “dull” religious reading was used by the Holy Spirit to turn Teresa’s heart toward God and eternity. It was used by Him to open up her eyes to the truth that most of the affairs of men were futile and that the world had nothing but vanity to offer. By the time she left her uncle’s house (and his dusty, pious books) she had come to the full realization that so far, she had lived her life with so little purpose that if she were to die, she would not go to Heaven, but would be buried in Hell.

Reading aloud to her uncle day after day from books that at first were so dull they practically exasperated her to tears convinced her that it was time to make a choice once and for all between the world and God. Later on, she admitted that her spirit had been awakened by the books that she had read at her uncle’s house. She then decided to give her life to God as a Carmelite nun.

Not only this, but St. Teresa admits that she developed the lifelong habit of reading holy books, which was formed at the house of her uncle. As we all know, eventually, she was used by God herself to write books that would change the world.

When I first read this, that’s when I realized that what we were doing at night, reading aloud from the books of the saints, and praying the Rosary together as a family, was not in vain, and I resumed these activities once more. I learned that eventually, these seeds will take hold, just as they did in the life of St. Teresa of Avila. It’s up to God to decide how and when; my job was to simply scatter the seed into the soil of my children’s hearts.

Several years ago, I read (aloud to my family) a book about Mother Teresa. Every night, Mother Teresa’s mother would have the family say the Rosary together. This was used, more than anything, to inspire Mother Teresa to give her life to God in a very special way.

It’s the simple things, such as saying the Rosary as a family together, or reading together as a family from the Bible, the Catechism, or a book about a saint, that seem to have the biggest impact in people’s lives. But when we don’t see results right away, we become convinced that what we’re doing isn’t making much of an impact, so why continue doing it?

St. Teresa’s exasperation and her uncle’s dusty, pious pieces of Renaissance rhetoric have taught me not to give up. Satan wants us to give up. He wants us to get discouraged when we don’t see the harvest right away.

It is not our job to bring about any spiritual awakening in the lives of our children; that role belongs solely to the Holy Spirit of God. Our job is to simply plant the seeds and to water them in faithfulness to God.

Keep reading the Scriptures to your children. Keep reading aloud to them about the lives of the Saints. Even if your children are in their teens, don’t stop reading aloud together as a family. Keep saying the Rosary as a family each night around the table. Don’t listen to the devil when he tells you that what you’re doing is in vain, for he is a liar, and when he lies, he speaks his native language.

One missed day of praying the Rosary and reading spiritual books aloud as a family eventually turns into a missed week, which then turns into a missed month. Before you know it, a life-changing, soul-reviving, and spiritually nurturing habit has died. Remember what the Bible warns:

“A little sleep, a little slumber, a little folding of the hands to rest – and poverty will come on you like a bandit and scarcity like an armed man.” [Proverbs 6: 10-11].

…and let God take over from there!